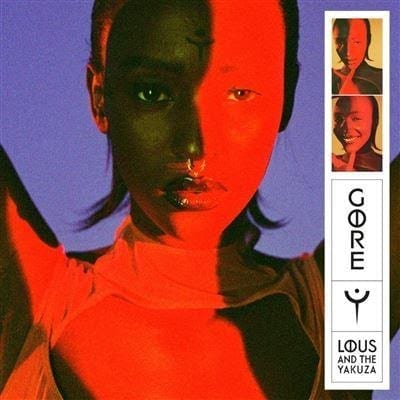 Lous and the Yakuza is Marie-Pierra Kakoma, a Belgian-Congolese born in 1996. And what a pleasure to write about someone who unites purity… and gore! Appearing on the cult music show Taratata at the end of 2019, Lous was the pearl revealed by Nagui, a presenter who had seen many others go by, but was amazed by her. There she presented her first piece, “Dilemme”, produced by Spain’s El Gincho, who created the sublime “Malamente” for Rosaliá. Today, Kakoma is releasing her album Gore.

She’s everywhere, from the Rwandan press to the luxury fashion house Chloé, Colors on YouTube (with the song “Bon acteur”), and now in Canada. It’s hard to ignore all the signals that lead to her, but beyond the Lous and the Yakuza phenomenon, her life is no rosier than her skin is black. Rather, it’s “ebony colour”, deep red and violet as the cover shows. Gore is adorned with an infinite number of musical colours, making you wonder, as she does on “Solo”, why black isn’t a colour of the rainbow. The lucid Brussels rap she offers can’t be resolutely reduced to her feminine sensibility (“Don’t call me pretty, my crew is hot,” from “Tout est gore”), as her poetry is drawn from the half-light and can touch any human being. Nobody else could deliver lines like “Une vie de merde, c’est juste une vie de merde” (“A shitty life is just a shitty life”, from “Dans la hess”) in such a silken voice. Over music mixing trap melodies, R&B, and classical piano, her lyrics oscillate between hip-hop flow and a siren’s call. And like a call to witness, her “Quatre heures du matin” could be the B-side of Angèle’s “Balance ton quoi”, with extra cruelty.

But who is Lous? If we’re not talking about power, we’re talking about strength. Strength of words, strength of character, aesthetic strength (check out her video clips) and vital power. And the strength to burst this gore bubble, with “Solo”, because if we believe Lous, we are born and die alone, with a life in between full of desire, love, revenge, violence, and above all independence. All of it expressed with a delicacy that avoids over-sharing, in order to make it a hymn to humanity.

If one is interested in her name, Lous, Solo, Soul, these anagrams illustrate a multiplicity of universes contained in four letters, which the Gore album communicates with finesse, and her Yakuza crew sublimates. Finally, Lous is a symbol, shaped like the letter Y with “her hands raised to the sky”, the meaningful emblem of a new goddess.