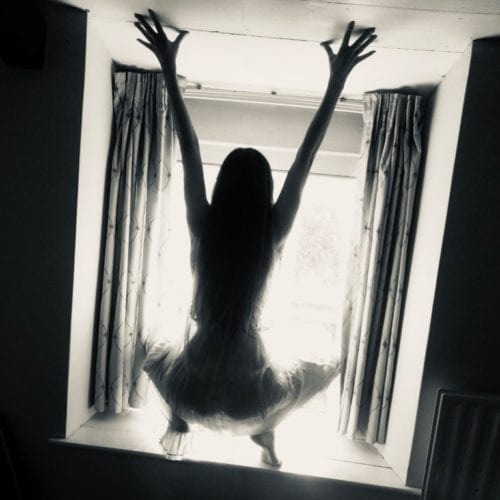 Her name is Katie Jane Garside. Singer and lyricist, she made her name with punk band Daisy Chainsaw, then in the 2000s with high-octane rock band QueenAdreena, with whom her stage performances were explosive to say the least (check out one of the live versions of “Pretty Like Drugs” on YouTube). Spotted by Hector Zazou, she participated in the astonishing album Corps Électriques, one of the late French musician’s last projects, before moving on to more intimate music, which she describes as black folk, in the duo Ruby Throat . And now, under the banner of Liar, flower, she has returned to rock, without denying her more recent folk streak.

Katie Jane Garside is a voice, sometimes high-pitched, that at times reminds us of Kate Bush or Björk. She has the same kind of smoky veil as Björk, with the same kind of high-pitched misfiring, as if, for a fraction of a second, the tape slipped or was demagnetised. Its mixture of expressive fragility and strength is immediately seductive. It’s no coincidence that Zazou – who knew a lot about women’s voices — made use of it.

The first track is all delicacy and vulnerability, something almost diaphanous, and at the same time gripping. On the next one, “My Brain is Lit Like an Airport”, Garside and her sidekick, multi-instrumentalist Chris Wittingham, go into a muscular mode. It may not rock with as much abandon as it did in the heyday of QueenAdreena, but the whole is as abrasive as one could wish for. On the third, we find ourselves immersed in a trip hop ambience that reminds us of the oppressive and haunting atmosphere of Portishead’s third album. Slow pieces and uptempo alternate until the climax, on the very bare title track, where her repeated invocations of the heavens reach a poignant intensity.