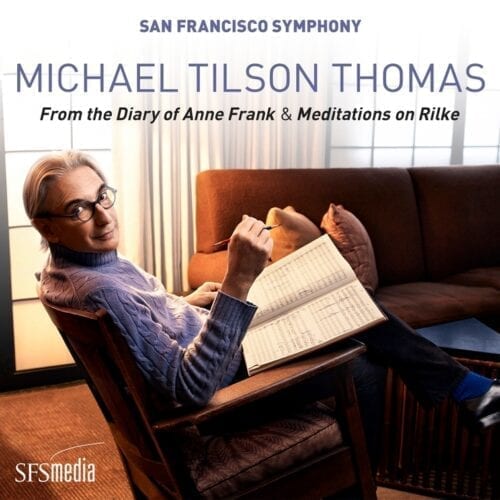 To mark his departure after spending the last twenty-five years at the helm of San Francisco’s orchestra, the conductor and fine pedagogue Michael Tilson Thomas dons his composer’s cap on a unique record. The two works presented here, his first and his most recent, take the form of a universal and personal narrative that expresses, in a varied musical aesthetic, humanity’s worst, while at the same time conveying a surge of hope and optimism for the future.

Created in 1990 but never recorded, From the Diary of Anne Frank, the first work by Tilson Thomas, was the idea of actress Audrey Hepburn, who narrated it. Divided into four parts, these symphonic variations using passages from the diary of the young German woman Anne Frank present a poignant portrait of the evolution of the Nazi menace and the Second World War. The music, both idiomatic and expressive, which accompanies the narrative, voiced with sensitivity by mezzo-soprano Isabel Leonard, evolves in accordance with the gripping and disturbing words left by Anne Frank.

Somewhat like a counterbalance to the first work, the musical meditations on poems by Rainer Maria Rilke reflect Tilson Thomas’s journey, which he translates with a musical palette as effusive as his personality. In a few moments, we move from a pianistic passage in the honky-tonk style (“Herbsttag”) to a Schubertian and Coplandian lyricism (“Immer wieder”), then to a duet using an expressive language at times reminiscent of sprechgesang (“Imaginärer Lebenslauf”). The two singers of this work, baritone Ryan McKinny and mezzo-soprano Saha Cooke, give a brilliant and sensitive interpretation.