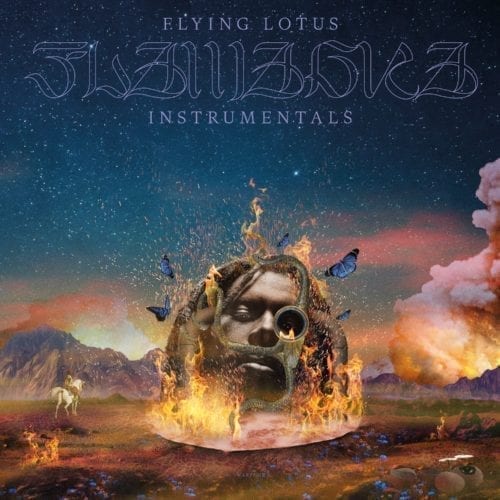 There is now a lyric-free version of Flamagra, a title to which an Instrumentals component has been added. Flying Lotus’ work can be seen as an extrapolation of his compositional effort of the moment, the soundtrack to Yasuke, the animated film about the first black samurai in history, produced by Netflix. A year ago, Flamagra was launched on the English label Warp, bringing together a top-notch guest list: Anderson. Paak, Solange, George Clinton, David Lynch, Little Dragon, Tierra Whack, Denzel Curry, Shabazz Palaces, Thundercat, and Toro y Moi. Flying Lotus has taken more or less the same pieces, extracted human voices from them, and extended their proposals. Without rap or singing, the work of Steven Ellison (real name) is dependent on his current instrumental knowledge, i.e. a jazz-funk-fusion enriched with electronic and hip hop assets, to which he adds more complex and conceptual sequences. With few exceptions, Flamagra heralded a certain redundancy for Flying Lotus, and here it is now, revived in its “instrumental” version.

Of course, its limits are evident: even enriched with modern harmonies, the jazz groove threaded with hip hop and R&B remains confined to its rhythmic obligations, essentially binary. However, the complements suggested here change perceptions: Flying Lotus’ explorations in contemporary music, written or improvised, are not simple interferences, his body of work is clearly enriched by them. What’s next? The California artist has certainly not reached his creative limits with the tools at his disposal today, but maintaining his pull now requires the mastery of the most advanced techniques in contemporary instrumental language, far beyond black culture and its most refined manifestations. Will Flying Lotus choose this path in the long term? Wouldn’t the next step be to assemble a permanent orchestra to develop its language?