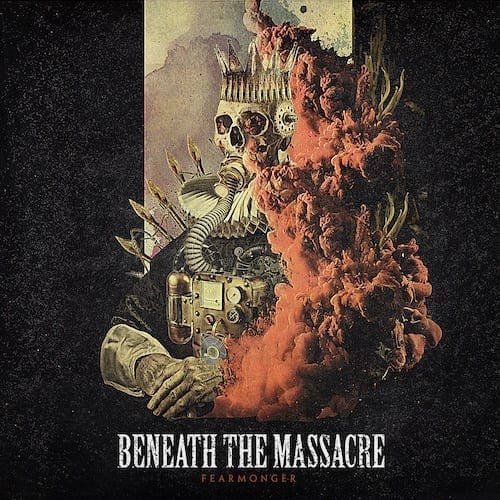 The passage of the years usually has the effect of encouraging ultra-brutal bands to slow down the pace because it takes energy, not to mention dexterity, to deliver the goods on stage. Beneath The Massacre don’t follow that rule on their fourth record – instead of mellowing out, they’re putting the pedal to the metal and even adding a layer of visceral intensity. Bye-bye to the many breakdowns that allowed one to catch one’s breath on Mechanics of Dysfunction (2007), Dystopia (2008) and Incongruous (2012). On Fearmonger, we find them on “Hidden in Plain Sight”, “Of Gods and Machines”, “Treacherous” and “Autonomous Mind”, but the brutality of the overall album mitigates their impact, which is not a flaw when you like extreme music. Fans of bands such as Cryptopsy, Origin, Benighted and Archspire, that means you.

One of the strengths of the quartet, which picked up again in 2018 after a six-year hiatus, remains its speed of execution. Christopher Bradley’s guitar solos are stunning and drummer Anthony Barone (Shadow of Intent) capably replaces Patrice Hamelin (Martyr, Gorguts). The electro beat present on “Hidden in Plain Sight”, in the breakdown of “Autonomous Mind” and at the end of “Bottom Feeders” serves as a thread between Fearmonger’s songs, and adds a little texture to the sonic assault.