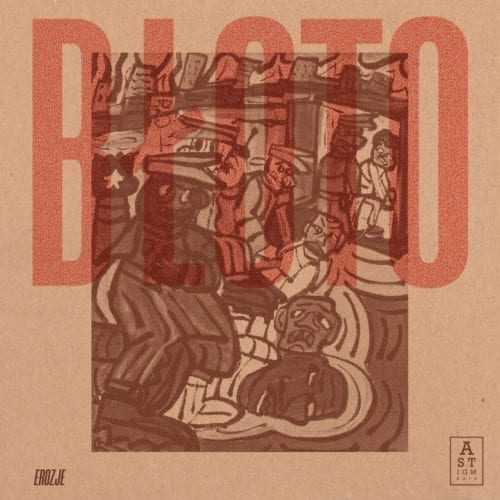 A more fractious offshoot of the agreeable and scholarly Polish electro-jazz sextet EABS, Błoto’s name translates to “the mire”. The quartet is far too capable, crafty, and cooperative to allow themselves to get bogged down for even a moment on their remarkable first album. Erozje is, however, a raw, dirty, calamitous affair, laced with apprehension and flashes of alarm, a fever swamp that’s frequently frightening, and fun as hell.

The raucous rhythm section throws its weight around, demanding parity with the keys and tenor sax, which for their part profit from the pandemonium, executing gestures that might be out of bounds under more reasonable circumstances. Crisis equals opportunity, right?

Błoto have expressed a debt to the grittier elements of ’90s hip hop, and one can hear it in the stubborn beats and apprehensive vibe of “Bagna” and “Czarne ziemie”. The brief, hilarious “Rędziny” is an unstoppable countdown to catastrophe. Rather elliptically, it’s immediately followed by the shattered, post-traumatic lounge jazz of “Bielice”.

There’s a solid arc to the final three tracks.“Ziemie zdegradowane przez człowieka” lets a hush fall over the proceedings, but not a calm, subtle yet persistent in its suggestions of trouble ahead. Sure enough, the hair-raising “Glina” follows and, like some malevolent Pokemon, sheds skin after skin, emerging each time as an even more startling permutation. It’s a thrilling rush that leaves the listener gasping for breath.

The merciful closing track, “Gleby brunante”, absorbs the residual pressure of its predecessor and flips it inside out, allowing a fraught and intense album, one that encapsulates a very precarious zeitgeist, to conclude on an entirely unexpected note of reassurance, even redemption.