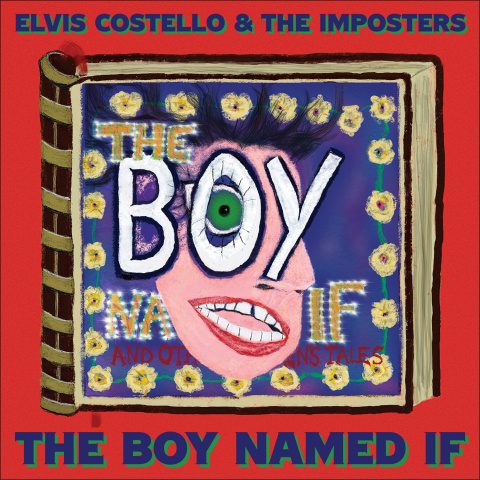 Even though Declan Patrick McManus–who has called himself Elvis Costello since the days when Montreal hosted the XXI Olympiad–is inexorably heading towards septuagenarianism, his production pace remains pretty steady. In the last 15 months, Costello has released: 1. The very successful Hey Clockface; 2. Its French-language companion La Face de Pendule à Coucou, featuring two versions of three of the Hey Clockface songs with Iggy Pop and Isabelle Adjani, among others; and 3. A Hispanic version of This Year’s Model (which we reviewed here). And as 2022 is just beginning, here is The Boy Named If, the 32nd studio album of supreme musician-musicophile Elvis Costello. He teams up with The Imposters, i.e. keyboardist Steve Nieve, drummer Pete Thomas and bassist Davey Faragher (replace the latter with Bruce Thomas and you get The Attractions). From “Farewell, OK” the striking first track, to “Mr. Crescent”, the thirteenth which delicately closes The Boy Named If, Elvis Costello proves that he’s still on fire.

Let’s remember that the first part of Elvis Costello’s trajectory–from My Aim Is True (1977) to Trust (1981)–was resolutely new wave, punk, post-punk and power-pop. Costello reconnects with this compositional and lyrical vehemence, after decades of twists and turns in the nooks and crannies of pop and serious music. In his decades of musicophile forays, Costello has collaborated with country demigod George Jones as much as he has with the rehabilitated monarch of orchestral pop, Burt Bacharach, as well as a bunch of jazz, classical and chamber opera creators and performers. In The Boy Named If, Costello takes us to the “Land of the Magic Lantern” where characters like Penelope Halfpenny and Mr. Crescent live, along with the narrator in his quest for maturity. Hyper-keyboardist Steve Nieve uses his instruments–especially his Continental Vox organ–with skill, vigor and intelligence; he is particularly inspired in the new wave passages of Magnificent Hurt. As always, Pete Thomas is dazzling on drums. As for Mr. Costello himself, the years have not diminished his vocal chords. And from the way he handles his Fender Jazzmaster and his Gibson Kalamazoo, his interphalangeal joints are yet to be attacked by arthritis. Note the vocal participation of talented Americana practitioner Nicole Atkins on “My Most Beautiful Mistake.”