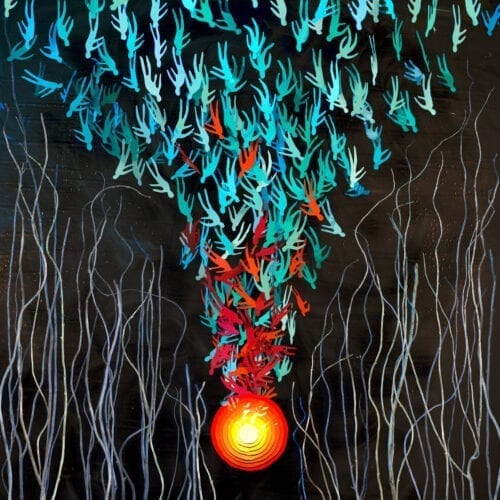 The musicophile who’s been tracking Conor Oberst for a good quarter of a century is entitled to ask himself the following question: is the leader of the trio Bright Eyes more hyperactive than introspective? Then, as a supplementary question: in his introspective flights of fancy, has Conor ever wondered whether, if he had been born in Ireland in the 15th century, say, he would have become a bard, a Celtic poet-singer walking from town to hamlet, reaching England and then France, doing the reverse crossing he evokes in “Calais to Dover”?

For lack of an answer to these questions, let us note that Nebraskan Oberst is one of the most gifted and fruitful songwriters of his cohort, the new forty-somethings who express themselves in the language of Springsteen. Down in the Weeds, Where the World Once Was brings to ten the number of albums by Bright Eyes, a trio completed by multi-instrumentalists Nathaniel Walcott and Mike Mogis. This is also the first release from Bright Eyes since The People’s Key in 2011. Needless to say that Oberst took advantage of this near-decade to expand his body of work, solo or with other bands.

Oberst wrote the lyrics for all 14 songs on Down in the Weeds, Where the World Once Was, including one in conjunction with his fellow Omahan Miwi La Lupa. All the music is the fruit of the trio, who also produced the album. The curious musicophile – a pleonasm? – may once again take advantage of Oberst’s dazzling abilities as a melodist and storyteller. And what’s he talking about, by the way? Anything, as long as it is conducive to melancholy, an inclination that is supported by his constant tremolo. Musically, it is both sober and sumptuous, astral and earthbound. String players, a mini-chorale and a trio of bagpipers tastefully adorn these compositions, which abound in the many nuances imagined by Oberst, Walcott, and Mogis. Not to forget the valiant companions: Jesca Hoop on vocals, as well as über-bassist Flea, drummer Jon Theodore, and percussionist Kip Skitter, an alias behind whom a certain Zack de la Rocha is hiding!

So in Omaha, in the 21st century, a bard lives and sings this: “There’s bodies in the Bataclan, there’s music in the air / And they sing, ‘Éphémère, éphémère, éphémère…’ / And ‘Wish You Were Here’.”