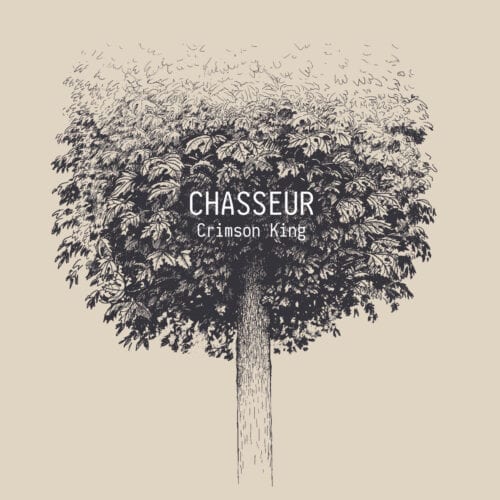 The title of the album is likely to attract the grey padawans who are followers of Robert Fripp, the Yoda of edgy prog. Let them be mistaken – and take the opportunity to lend an ear to the record – because it’s about a maple tree of Crimson King variety, like the one on the cover. Gaël Desbois, alias Chasseur, thus evokes his father, whose ashes are buried at the foot of a similar tree.

Desbois has been a composer, musician, and actor in various theatre and dance companies, drummer with Laetitia Shériff, Miossec, Dominic Sonic, and Santa Cruz, and co-founder of the duets Mobiil, Del Cielo, and Tchewsky & Wood. In 2016, he launched the Chasseur project, which finds its etymological origin in Hunter, the first name of the young protagonist of the film Paris, Texas.

The harsh lyricism of Wenders’ masterpiece undoubtedly influenced the aesthetic of Chasseur. In songs such as “Ailleurs”, “Jouer avec le vent”, “Au lointain”, “Les ruisseaux” and “The End”, Desbois describes the vertigo caused by the disappearance of an irreplaceable person, then questions the dichotomy or indivisibility of existence and death. His deep tone and warm timbre remind us of those of Bertrand Belin. He wrote the lyrics of “Du bleu” and “Comme il vient” alone. The other songs are the fruit of his collaboration with the Rennes writer Nathalie Burel, who provided Chasseur with the four texts of the EP Dans la ville, released in 2017.

To generate the profusion of rhythms and melodies contained in Crimson King, Desbois used the appropriate machines. These necessarily include a Fairlight CMI synth, or its ersatz, since the overall sound is rooted in the fertile decades of Jean-Michel Jarre (Zoolook period), Giorgio Moroder, and Suicide. Crimson King remains nonetheless a cutting-edge work, making Gaël Desbois as fascinating a creator as his compatriot Arman Méliès.