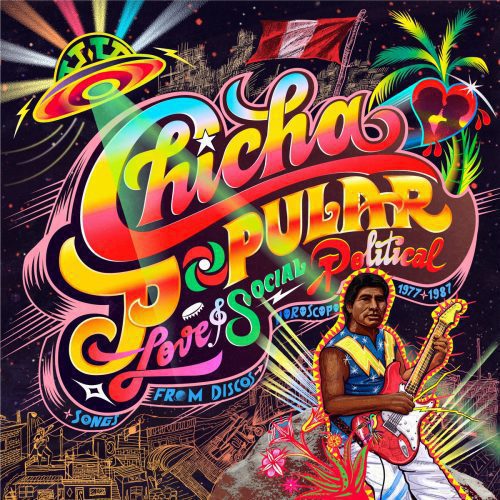 Episodes of mass urban migration have historically given birth to major new musical forms, the most obvious example being the Great Migration of southern American Black folks a century ago, spreading the blues far and wide, and setting the stage for the rock and soul movements. Peru had its own dramatic time of change in the late ’60s, as Andean villagers flooded the cities of the lowlands, particularly the oil towns of the Amazon, in search of work. The result was a spectacularly rewarding cultural collision as the proletarian highlanders brought with them their traditional huayno folk music, and mixed it up with Colombia’s easygoing cumbia (the Latin answer to reggae, if you wish), and also the surf and psych-rock sounds coming to the fore the world over, with twangy guitar and groovy Farfisa organ galore. The new Peruvian style was christened chicha, taking its name from the notorious, purple-coloured corn liquor enjoyed in the region since Incan times.

As one might guess from such nomenclature, chicha was primarily party music, and sure enough, the first half of this excellent compilation’s two dozen tracks lean in a romantic direction. This was nonetheless working-class music, and from a place and time of great instability. Founded in 1977 by Lima entrepreneur and music lover Juan Campos Muñoz, the Discos Horoscopo label had its finger on the pulse of Peru, musically but also politically. As song titles like “Clase Social” and “Pobre Cada Dia Mas Pobre” (“poorer every day”) suggest, the chicheros bearing the Horoscopo imprint weren’t shy to share their economic grievances, with a fierce rolling of their Rs. A number of the musicians and bands here achieved something close to superstar status at home, and some, such as Los Shapis, are still active. On the subject of Los Shapis, those quick enough to order one of the first 150 vinyl versions of this release will enjoy a bonus seven-inch pairing the band with singer Nohemi, chicha’s first female vocalist, sometimes called “the Kate Bush of the Andes.”