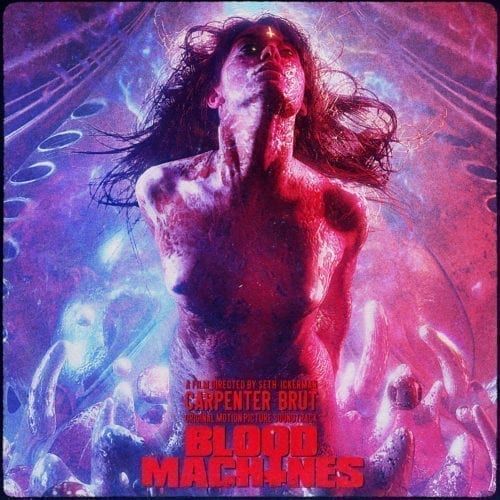 The French directorial duo known together as Seth Ickerman pushed all the right buttons for fans of sci-fi cinema of the ’80s when their low-budget, hallucinogenic, hyper-saturated “cosmic opera” Blood Machines rolled through the film-fest circuit last year. The film will be streaming on Shudder, here in Canada, as of May 21. In the meantime, the soundtrack is out, to get you in the (dark, eerie, and bombastic) mood.

The music of Carpenter Brut (aka French synthmeister Franck Hueso) isn’t a secondary concern here, it’s an essential feature, right to the roots of the film, which is an extension of the video for Carpenter Brut’s “Turbo Killer”, directed by the duo in 2016. Seth Ickerman’s cinematic style – sleek, serrated, and sensational, soaked in lurid fuschia and aqua – trips out on all the tropes of the era they’re revisiting. The match with Carpenter Brut is thus synergistic, as Hueso’s work, a sort of dark and vicious divergence from the template set by Daft Punk’s robo-disco, draws entirely on the same cinematic reference points. The perfection of pairing seems to have given Carpenter Brut a kick in the ass, as the monumental, menacing synth-rock here, howling, groaning, and churning, is a step up from 2018’s unsatisfying album Leather Teeth.