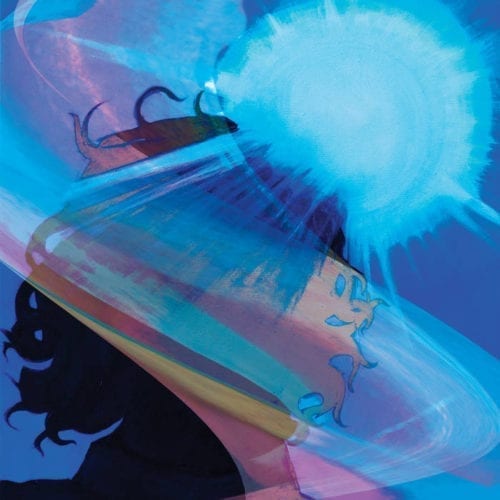 Behind the mysterious name Zoon is the word zoongide’ewin, which means bravery and courage in the Ojibwe language and symbolizes the bear spirit of guitarist Daniel Monkman. That force has driven reconciliation, the unprecedented union of two musical cultures, which he calls the moccasin-gaze. The Hamilton-based artist draws inspiration from traditional First Nations rhythms. and the brilliant guitarwork of Kevin Shields of shoegaze band My Bloody Valentine, to create a blend of sounds that reflect his personal history. Born and raised in Selkirk, Manitoba, Monkman was at odds with his Indigenous background during his youth, falling into a vicious cycle of addiction in an attempt to escape his trauma and hardship. Eventually, reconnecting to his heritage and saved by his passion for music, he immersed himself in a personal and spiritual quest described on this debut album. With only a guitar, a Fender Deville amp, and a DigiTech delay pedal as tools, the artist manages to create fantastic sonic waves, voluptuous and intoxicating, delicately psychedelic and sometimes subtly rewound, as if to better unspool the thread an old cassette listened to in a loop. Produced with the help of Montreal artist Rishi Dhir (Elephant Stone), Was & Always Will Be transports us into a state of therapeutic hypnosis, creating a unique and radiant inner feeling. He also collaborates with Indigenous hip-hop artist Wolf B on “Infinite Horizons” to affirm and confront a painful truth buried in his past. On this highly successful debut album, Monkman embraces his ancestors’ historic wound and heals it with a rich, oceanic, colourful, and life-saving soundscape, where he can finally spread his wings freely.