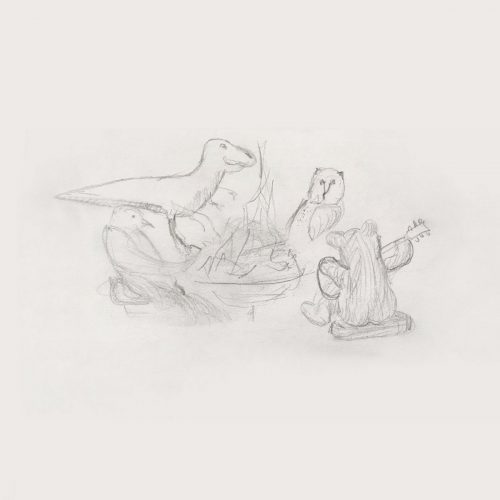 Big Thief’s new double LP, Dragon New Warm Mountain I Believe In You, is a whopping 20 songs long, but as you dive in, you get a sense that this long tracklist does not come from the band’s mindless, artistic, self-indulgence but from an appreciation and generosity for the listener. Big Thief has complete trust in themselves, their producers, and their fans, meticulously deciding which songs would make the cut, and creating a cohesive and linear atmosphere. It would be hard to omit a single song on this titan of a record.

Over a five-month songwriting period, the band wrote 45 songs, adding new sounds (violin, flute, mouth harp,) to their interesting repertoire of indie rock/folk. And the result is a sublime, yet eclectic listening experience, that draws influence from Appalachian folk, country folk, Americana, indie rock, etc. Just listen to the raw nature and playfulness of “Spud Infinity” for a taste.

At the forefront is Adrianne Lenker’s prophetic, trembling voice, but also backing vocalist/lead guitarist, Buck Meek’s, adding a beautiful and bucolic essence to many of the harmonies on Dragon New Warm Mountain I Believe In You.

You have to wonder how Lenker come up from her lyrics; they must come from an inner power of the stream of consciousness, or perhaps every line is well thought out after gazing upon the dusty stars in Tucson, Colorado, New York, and California (locations the record was recorded.)

Either way, some of the lines and sounds in a song like “Little Things,”—a classic Big Thief track with its repeating phaser guitar and slightly frenetic overdrive lead guitar and bass,—are sure to stop you in a moment of reflection as you wonder, what did she just sing or what is that sound? Not to worry, it’s just the shamanistic power of Lenker and the rest of Big Thief, doing what they do best.