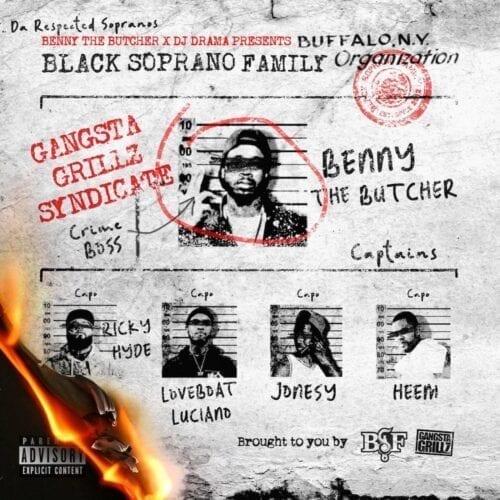 Headlining the new Buffalo rap scene, known for its raw aesthetics in tune with the East Coast sound of the 1990s, Benny the Butcher presents his Black Soprano Family collective on this first mixtape under the leadership of DJ Drama, one of the key producers behind the emergence of trap. In short, two eras meet, but the mix remains homogeneous: raw rhythms, elementary sampling and sharp lyrics. In the pure tradition of mafioso rap, a New York sub-genre that praises the Cosa Nostra and its modalities (crime and luxury, but loyalty and brotherhood above all), the five rappers show their strengths on eight fiery songs which, if not all memorable, embody an obvious complicity, notably symbolized by their reappropriation of the codes of the American cult series The Sopranos. In spite of the talent of his four companions (Ricky Hyde, Loveboat Luciano, Jonesy, and Hemmer Da Steemer, who in particular comes out on top), Benny the Butcher steals the show on several occasions, notably on “It’s Over” and “Grams in the Water”, which contains a few gems like, “I put coke-white seats inside a lime-green Tesla”. It’s a worthwhile introduction if you like raw rap, full of popular references and all kinds of allusions to drug dealing.