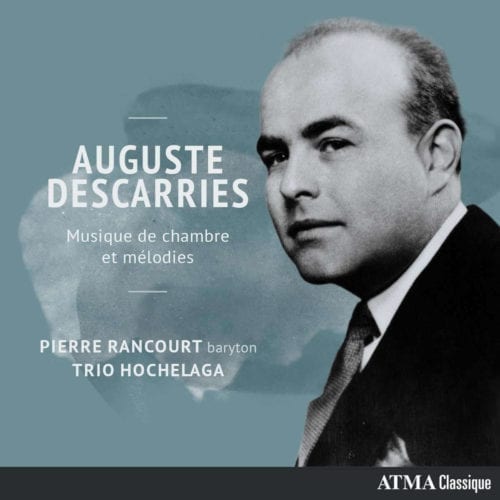 Auguste Descarries (1896-1958) was a virtuoso pianist and composer, whose contribution to Quebec’s musical heritage is little known. He is part of an aesthetic of musical art influenced much more by the Russian neo-Romanticists such as Medtner and Glazunov, with clear melodic lines, than by modernists such as Stravinsky or Prokofiev. The evolution of Descarries’ lyrical and romantic language, which occurred during his advanced training in Paris between 1921 and 1930, is palpable in this album devoted to instrumental and vocal works by the composer, performed by the Trio Hochelaga and baritone Pierre Rancourt, with the participation of violist Victor Fournelle-Blain and violinist Éliane Charest-Beauchamp.

By presenting, in a certain alternation, the pieces for voice and those for chamber ensemble from different creative periods, magnificently interpreted by the warm timbre of baritone Pierre Rancourt and the ample sound of Trio Hochelaga, the artists demonstrate the breadth of Descarries’ stylistic palette. Witness the refined and expressive Fantaisie for string quartet, which follows on from Trois Poèmes de Marceline Desbordes-Valmore, and the romance L’Étoile du soir based on a poem by Alfred de Musset, which evoke the style of 19th-century French melodies. The difference is also striking when listening to the Élégie for violin and piano, whose light-hearted character precedes by about 10 years the piece for cello and piano Mon lac, with its noble and graceful lyricism. But the piece that best captures the mature harmonic richness that Descarries displays is without a doubt the excellent and energetic Quatuor for violin, viola, cello and piano. Left unfinished in 1934, the work was completed in 2015 by Aleksey Shegolev, who paid tribute and justice, in the piano cadenza, to the composer’s virtuosity.

After the works of André Mathieu popularized by Alain Lefebvre, the album Auguste Descarries: Musique de chambre et mélodies, with its selection of works balancing melodic lightness and careful harmony, is sure to satisfy lovers of music from the first half of the 20th century, as well as music aficionados of Quebec composers whose works, often little represented, merit wider awareness.