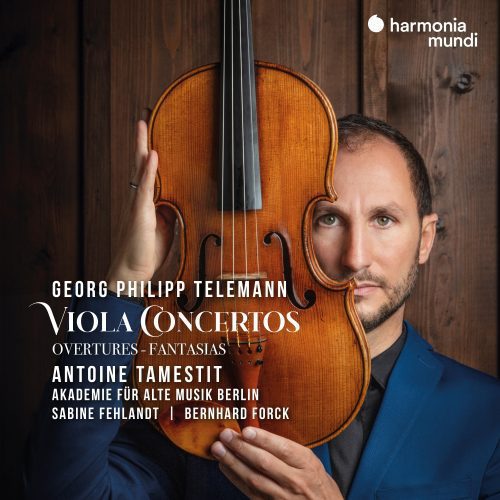 In this particularly frigid January 2022 comes a breath of warmth and sunshine with this album by the excellent Antoine Tamestit. There are not many works for viola from the Baroque period, but when there are, they are good! Bach’s 6th Brandenburg Concerto features two violas, a daring move at the time. Here’s another daring artist: Georg Philipp Telemann, probably the most prolific composer in history. A tireless jack-of-all-trades, brimming with curiosity and open-mindedness, the man with 6,000 opuses (at least) was one of the first to write true concertos for the viola, an instrument that was long seen as a necessary evil, useful for filling out a middle range between the piercing, heroic high notes of the violin and the rhythmic assurance and the comforting, reassuring roundness of the cello. Telemann made it a true soloist and highlighted the particularities of this unloved instrument. While the Italians snubbed it, Telemann, the German, gave it its first dazzling performances, in the form of concertos, a solo suite, and a trio sonata. Ironically, these works sound very ‘Italian’ in their fiery outbursts and frank, radiant melodies. The program is completed by two Overtures (suites of dances in the French style, with an ample and solemn initial movement) with a vivid, very colourful, and even humorous character: the Burlesque, which musically draws the characters of the commedia dell’arte, and La Changeante, with strongly contrasting movements and explosive dynamics. It’s a pleasure, brilliantly rendered by the soloist Antoine Tamestit, who at the same time vigorously conducts the Berlin Academy of Early Music. A disc that feels good as soon as it starts, and doesn’t stop until the last second. Yeah!