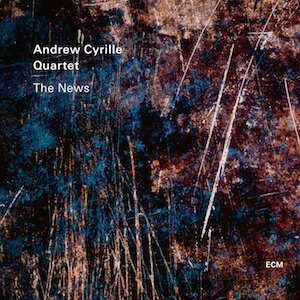 It’s fair to say that ECM records have given legendary drummer Andrew Cyrille a beautiful garden in which to grow his late-blooming flowers. Now 81 years old, the free-jazz veteran is on his third album as a leader for the Munich-based label. In 2016, he released The Declaration of Musical Independence, a first record for his quartet, which included guitarist Bill Frisell, keyboardist Richard Teitelbaum and bassist Ben Street. Two years later, Lebroba was released, an opus that saw him playing with Frisell and Wadada Leo Smith. These two works were superb bouquets that showed us that the elder gardener of free jazz had lost none of his know-how. The midnight-blue flowers that he offers today with The News are just as splendid. The quartet he led on The Declaration is back, but Cuban-born pianist David Virelles replaces Teitelbaum, who died last year.

The disc owes its title to a piece that Cyrille recorded in the ’70s. For this rather conceptual work, the drummer had placed sheets of newspaper on his drums and rubbed them with his brushes. Here he takes up the idea for the purposes of a new version, to which Virelles’ atmospheric synths and Frisell’s exploratory playing lend an air of mystery. The program also includes a composition by avant-garde pianist Adegoke Steve Colson, three more melodic creations by the guitarist, including “Go Happy Lucky,” a weightless blues, as well as the silky “Incienso” by Virelles. Then, after the very well named “Dance of the Nuances”, imagined by the latter and the leader, this magnificent journey to the end of the night concludes with “With You in Mind”, a silky poem imagined by Cyrille himself. Once again, the skill of the experienced percussionist demands admiration. A Zen monk of drums and cymbals, he subtly embroiders around the natural rhythm of the music, letting it breathe and creating a fascinating universe where each sound is a star shining with its own light.