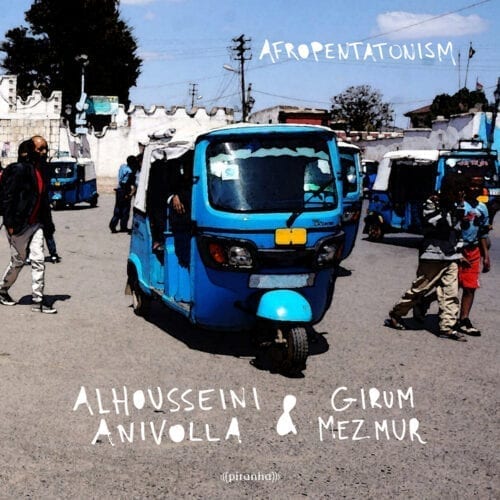 Afropentatonism is the title of a first collaboration between desert bluesman Alhousseini Anivolla and Ethio-jazz guitarist Girum Mezmur. Singer, guitarist, and bassist, Niger’s Anivolla had made a name for himself as frontman of the group Etran Finatawa, and also through his own projects from 2012 on. As for Mezmur, the superb guitarist has a long history in East Africa and is one of the key players of the musical revival in Addis Ababa, at the end of a cultural darkness under the authoritarian powers. Flashback? Ethiopian modernity expressed itself musically as early as the end of the 1950s, but it became world-famous long after its key elements had been expatriated to Europe. Ethio-jazz is a long way from the Tuareg blues, but the two styles are nevertheless linked by the desert culture, present everywhere in Niger and also in the northern part of Ethiopia. Ethio-jazz draws from the traditions of the Nile, at the confluence of African and Arab civilizations, but also from North American R&B, funk, and jazz. As for desert blues, it is the direct ancestor of Afro-American blues, but one feels the clear distinction in the playing, in the tone, in the direct and lucid character of the declamations, in the vocal inflections and of course in the instrumentation, even if it is electrified. In this case, the meeting of these two musical currents from Nile-region and Saharan Africa is essentially built on the exploitation of pentatonic scales (at five pitches of sound), so famously at the roots of the blues. On Afropentatonism, Ethio-jazz exhales more richness, harmonic and also rhythmic (binary/ternary alternations), which takes nothing away from the hypnotic grooves of the sandy Niger blues. One thing’s for sure, the meeting occurs between these two great currents of Africa. The exchange is fair, inspired and committed.