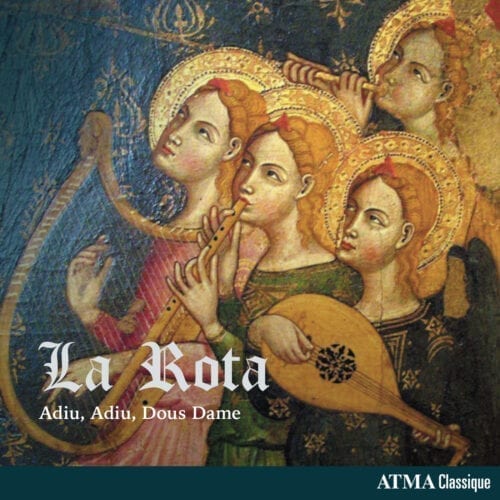 This album could have been entitled Medieval Pandemic Music! Indeed, Adiu, Adiu Dous Dame (you may have guessed that it means “farewell, farewell sweet lady”) takes up a typical repertoire heard in Florence in the middle of the 14th century. The city was then in the grip of a certain plague pandemic.

As recounted in Boccaccio’s The Decameron, a literary masterpiece written between 1349 and 1353, young men of good society withdrew outside the city to avoid contamination (a luxury that others could not afford, you might say… Ah yes!). They then tell each other all sorts of stories (of which The Decameron is composed), in which they sometimes refer to songs and music.

The La Rota ensemble unfortunately no longer exists. Adiu, Adiu Dous Dame was recorded in 2009 and is a rare opportunity to hear the quartet’s unreleased material. What’s more, one can recognize a little bit of the need of the people of the 14th century to escape through music from a daily life fraught with danger. Of course, the plague of the Middle Ages was infinitely more dangerous than our COVID-19, all things considered, but the idea is no less relevant.

More or less secular love songs are mixed with typical dances from the distant past, such as stamps or saltarelles. The members of La Rota play all this in a way that is both cheerful (in the case of the dances) and melancholy (in the case of most of the songs). If you are used to contemporary, classical, or any other kind of music heard on PAN M 360, an album like this one will be a radical change of scenery.

I highly recommend it!