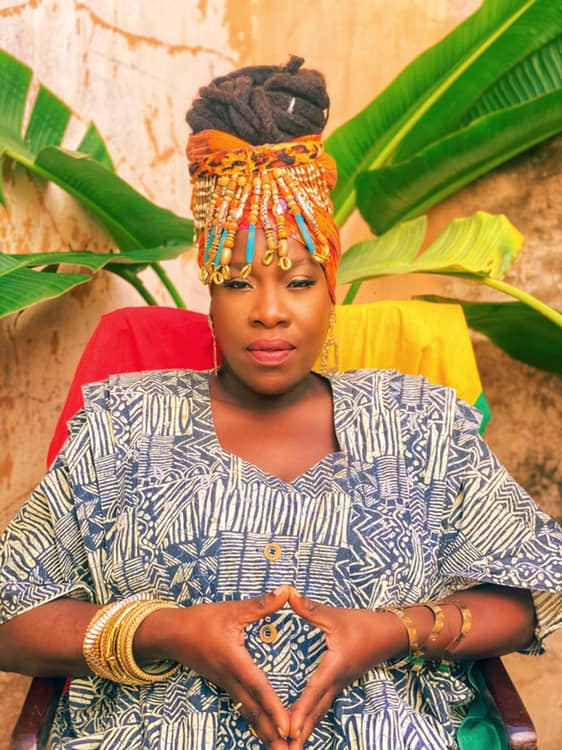 Have no fear, the queen is alive and well—Queen Omega, the impressive reggae artist from Trinidad, is back with a fourth project named Stars Align.

After a few years of silence (her last album, Together, We Aspire, Together, We Achieve was produced in 2012), Queen Omega finally had the time and the inspiration to come up with a new project. She was already known in the reggae sphere for her interesting vision of this particular genre. Even though everyone kinda “knows” it, it’s mostly no further than Bob Marley, the leader of The Wailers and a very influential figure of the Rasta movement. But for Queen Omega, reggae ought to be more than that and needs to change. With only eight songs, Stars Align is quite short and leaves us wanting for more! But with its engaging mix of dancehall, Afrobeat and reggae, this EP leaves you in a state of pure joy and enjoyment.

LMK and Stonebwoy both make appearances on the project, respectively on “Free” and “Number One”. In Queen Omega’s view, the two young men from Trinidad bring a new light and form to the project due to their own career in the music industry. “I want to help other artists to be known, to be able to play on the radio or to do festivals. I have to give back to them”, she says, revealing her motivation to see music change and evolve.

If you find yourself wondering, “what do I even know about reggae, I only know about Bob Marley…”, Stars Align is your chance to reconnect with the genre and to learn more about it. Or, if you simply want to listen to a good project from a talented Black artist, here’s your chance!

PAN M 360: You were born in Trinidad, a small Caribbean island often called “the land of the hummingbird”. What are some of your best memories about growing up there?

Queen Omega: My most candid memories would be with my family, you know? I was the only girl, all my siblings were born males, and being the only girl, I was always treated like a princess, like a queen, being treated with extra special care. And I had so many great moments with my family, I sang a lot with them, I enjoyed nature, and the get-togethers were always something!

PAN M 360: Would you be able to remember when and where you came to the realization that you had the wish to become an artist?

Queen Omega: Ever since I know myself, you know, consciously, I knew that I was a singer because my mom told me that from inception. I was born with a gift because my mom asked the superior forces. And when I started going to school, I was beginning to realize that my voice was beautiful… because I started to be requested a lot. I was asked to perform, to sing in a lot of shows and competitions.

PAN M 360: Stars Align is your latest project. Would you say that the star aligned during the pandemic, allowing you time and inspiration to create this EP?

Queen Omega: It was perfect. It was because of the covid-19 that I really got the opportunity to work on this EP. I took the advantage of the time being still for once, you know? With the lockdown and the curfew in my country—well, everywhere in the world, too!—I took the time to go to the studio, spent a lot of long nights there and before I knew it, the EP was produced! And it was perfect timing for me. My fans wanted more music from me, my promoters wanted more music from me…

PAN M 360: With Stars Align, were you trying to tell a story, or were the songs more individual?

Queen Omega: It is a story. Everything that I write about in Stars Align are experiences. Not always personal, but sometimes, experiences that I’ve witnessed, that I learned from, because we learn from mistakes, you know? Even if those aren’t ours. The story is really true and each song is a story and I think that’s precisely why I think Stars Align is a beautiful project; it’s true, it’s authentic, it’s real and raw.

PAN M 360: What are the important themes that you wanted to tackle?

QUEEN OMEGA: I wanted to talk about the future, the future generations, the children and how misled we can be today. And we have so much to blame, you know? With the elders, with the behavior of the adults… We must take responsibility and turn the page so we can be a better place for the future! So that’s one theme. And the other would be… a great love story. And you know, love isn’t always kind to us, sometimes, things just don’t work out the way you want them to, you know? So the love story in Stars Align talks about two people who really love each other but it just… doesn’t work out. But it’s hard to say goodbye.

PAN M 360: Stars Align would be far from the first time that you released new music. Destiny and Away from Babylon were the first projects you ever did, back in 2004. In 2008, it was the turn of Servant of Jah Army, and Together We Inspire, Together We Achieve back in 2012. What did you learn from all those projects?

QUEEN OMEGA: Yeah, that’s what makes Stars Align so precious. I kind of came out of the box of doing strictly reggae. I wanted to mix genres up a little bit because I’m so versatile, I can do a lot of things. The sound of Stars Align is more of a dancehall sound from Trinidad, we also have some Afro tones, some Afro beats. The one with Stonebwoy is very Afrocentric—you know, he is a king of the Afro dancehall!—so I’m really pleased with what we achieved with him.  And the song we did together is called “Number One”! So, I would say pretty suiting.

PAN M 36: What made you think that Stonebwoy would be a good fit for the project?

Queen Omega: He knew what he was doing, I think. I knew about this genre and the vibes that come with it, you know? My previous manager would always tell me about the importance of collaborating with other artists from Africa, and so I did! He actually wanted the same thing as well, so I think the universe heard us and made it happen.

PAN M 360: This year will mark the 35th edition of the Festival International des Nuits d’Afrique. In your opinion, why are those shows important and why people should go, even though they might be unfamiliar with African music?

Queen Omega: It’s important to me to participate in such projects because I think I have to do my part, my purpose, you know? I am very well looked upon, I think it’s part of my job to spread good vibes. And the more people will do it, the more people will be interested and curious, the more it will bring! I love performing at festivals because it is so diverse. We can see so many people from so many cultures with so many stories to tell and I love that. I love reaching out to people, to connect with them through my mission, my gift of music.

PAN M 360: Do you think that reggae might be a genre a little forgotten these days?

Queen Omega: Yeah, I think it’s designed to be that way but I also think that everything is about evolution. I think we are in a stage where reggae is really evolving because music grows, you know? And as it grows, we have to fuse it and so, as a reggae performer, I like to continue to explore and learn from other artists. But I’m not worried; the first thing people say when you talk about reggae is Bob Marley, a figure that will never be forgotten.

PAN M 360: Before we know it, the year is coming to an end! What are your wishes for the upcoming one?
Queen Omega: I just want to do more music. I am currently working on another album, so I’m just trying to see when I can get that wrapped up! I want to be able to go back on the road, to tour, get my label out so I can help other artists, especially in Trinidad to get the circle going. We have so much talent here and I can’t wait for people to be able to finally hear them.