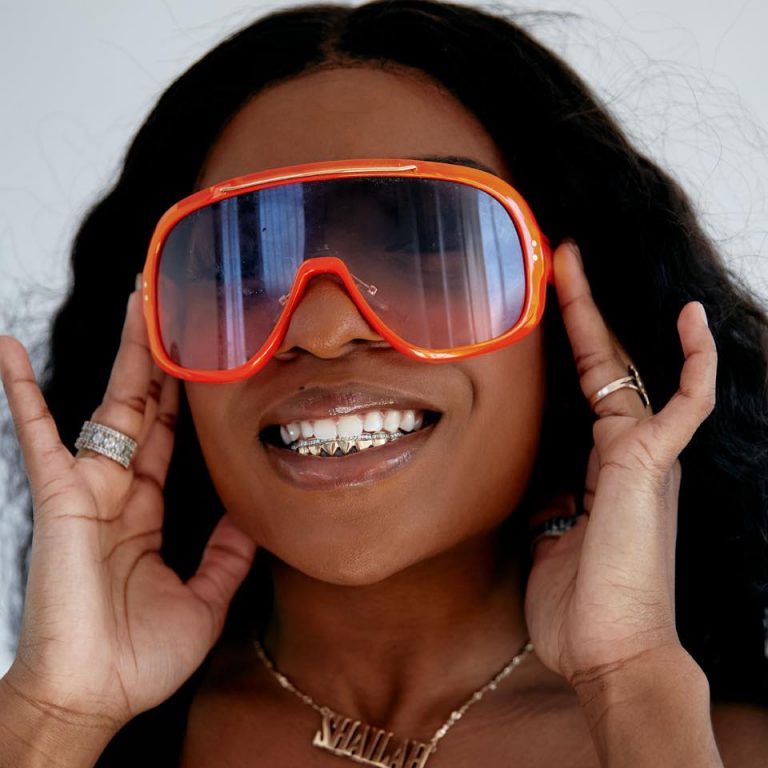 SLM Lives “Rent Free” In Our Minds, And We Love It

Montreal hip-hop wordsmith, Shailah L. Morris, who goes by the moniker SLM (pronounced “Slim”), has been in the rap game ever since her arrival in September 2019. She released a remix of Drake’s “Money In the Grave,” kickstarting a series of remix projects, titled SLM MX. A year later she dropped her full-length debut, SLM: The Complete Flex Season.

This year she added to her spitfire sound with the REAL TALK RADIO EP where she collaborated with two other Montreal artists, La Reina and YAMA//SATO. SLM’s sound features trap, R&B, and classic hip-hop beats as she delivers lines with catchy, poetic precision. She had some time to chat with PAN M 360 about her roots, approach to songwriting, and teases what we can expect from a whole new SLM sound, before her performance during M For Montreal presented virtually to the international delegates… because of her huge potential.

PAN M 360: What made you want to start making your own hip-hop?

Shailah L. Morris, a.k.a. SLM: I’ve always had a passion for hip-hop and I wasn’t hearing what I wanted to hear out of the music scene here. So I contributed my sound to it.

PAN M 360: So how do you make songs that are not deemed conventional in hip-hop?

Shailah L. Morris: I definitely think that I have elements of my songs that can be deemed conventional to people, but the way I try to separate myself, is that every word that I say, I really mean and I live and do every day. So I think that’s one aspect that makes me different in itself, but also the elements of musicality that I choose to include in my beats. In my harmonies with things, adding layers, adding texture. And just making it a point and intention, every time I am writing a song or recording a new song, that I want it to sound and feel different and good to people and myself.

PAN M 360: Your song “RENT FREE” on the latest EP REAL TALK RADIO is so unbelievably catchy. I just love the concept of you living in somebody’s head “rent free.” Could you talk about the creation process of that one?

Shailah L. Morris: So “Rent Free” was one of those songs when I had felt like there was a lot of drama in my life at the time. I felt like my name, my spirit, my personality was, living in people’s brains and in their minds very heavily to the point where they were feeling the need to send some negative vibes my way. So I was like, ‘Damn, that sucks for you.’ I’m gonna write a song about it.

PAN M 360: So it was it in response to stuff you had done beforehand as an artist or in your personal life?

Shailah L. Morris: Yeah. I don’t remember exactly what I was that was going on in my head back then, but it was a little bit of both for sure.

PAN M 360: So did that affect your confidence as an artist? I mean, your music seems very confident.

Shailah L. Morris: Yeah, it is more to empower myself and people that listen to it 100 percent. But sometimes empowered people have their moments of being down and I feel like that’s important for people to notice. No one is 100 percent good all the time and anybody who claims to be is probably hiding the fact that they’re going through something. I don’t do that. That’s why I’m venturing into a more vulnerable side of music right now. Writing about things that make me feel upset or insecure, or just low at times. Especially living in Montreal, and it being a cold place. I’m not meant for the cold. And it being a place where I feel like a lot of people do not have open minds. And that’s just based on my personal experience. I do feel like there’s a lot of people who do have open minds, don’t get me wrong, but there are definitely people who don’t. And I’ve dealt with both, you know what I mean? So it’s more about how those negative feelings and emotions that have been projected onto me have made me feel.

PAN M 360: You have had a good number of views on your music videos in the past? Do you have any plans to do one for a song on the EP or anything you’re working on now?

Shailah L. Morris: Yeah I do have plans to do stuff for the EP. I wanted to do one for “JUST LIKE THAT” and “HEAVY” and “RENT FREE” as well. But definitely in the works, we’re doing one for “HEAVY” right now. And “JUST LIKE THAT” sometime soon. I have a vision for that one that can’t really be executed during the season. And for all the new stuff that I’m working on, I’m really taking my time with everything new that I’ve been working on, making sure that I have all of the video content before I actually release anything, just so that the rollout is complete.

PAN M 360: I’ve always felt it tough to listen to a modern hip-hop album front to back because nowadays with streaming, it feels like a singles game. But REAL TALK RADIO is very cohesive front to back. How did you achieve this?

Shailah L. Morris: First of all, all of the songs on that EP, and album [SLM: The Complete Flex Season] were made with the intention of making either an EP or an album. That’s the first thing I try to do is think, okay, what is the intention of this project, and does it fit with what I’m doing at the time? Also working with the same producer or primarily the same producer and finding beats that fit the vibe. For REAL TALK RADIO, I knew I wanted it to be something that made people feel like they could blast it out of their windows in their car while they’re driving on the highway, or play it out at a party. But you could also play it late at night by yourself in headphones to give you that energy boost. I also think all of the songs on the EP are in succession.

PAN M 360: Meaning they were written one after the other?

Shailah L. Morris: So the first two were produced by Keita [Saint]. He just kind of sent me some beats one day when I was still working on the album. So I went back and revisited them after the album was long out and I was ready to go back into the studio and make some new stuff. And those two beats really resonated with me out of like the six pack that he sent me. For “BIG BAG,” La Reina hit me up at like 12 and was like, ‘What are you doing right now?’, and we made that. We didn’t really know each other, but I like to just cook up with somebody new and just collab to see what happens. So yeah, that session became the start of “BIG BAG.”

PAN M 360: And how do you go about translating these songs to a live setting?

Shailah L. Morris: So for the M For Montreal thing they suggested I have some live instrumentation and a light bulb went off in my head. And the guys that I’m working with on my newer stuff right now actually are instrumentalists and they were super down to just help me out and work with me and do that show. We had a couple of rehearsals before and they had just listened to the beats and created a sort of composition based on that. I had nothing to do with composition at all. They kind of just were able to play it by ear and make it sound great. I love the live instruments sound and my newer stuff is definitely going to incorporate that. They’re pretty much still in like the demo, early mix stages. And I’m in no rush to release anything anytime soon because I feel like I’ve released quite a bit of things in the past two years already. I really want to refine this sound because it’s unlike anything anyone’s heard from me yet. It’s going to be a new SLM.