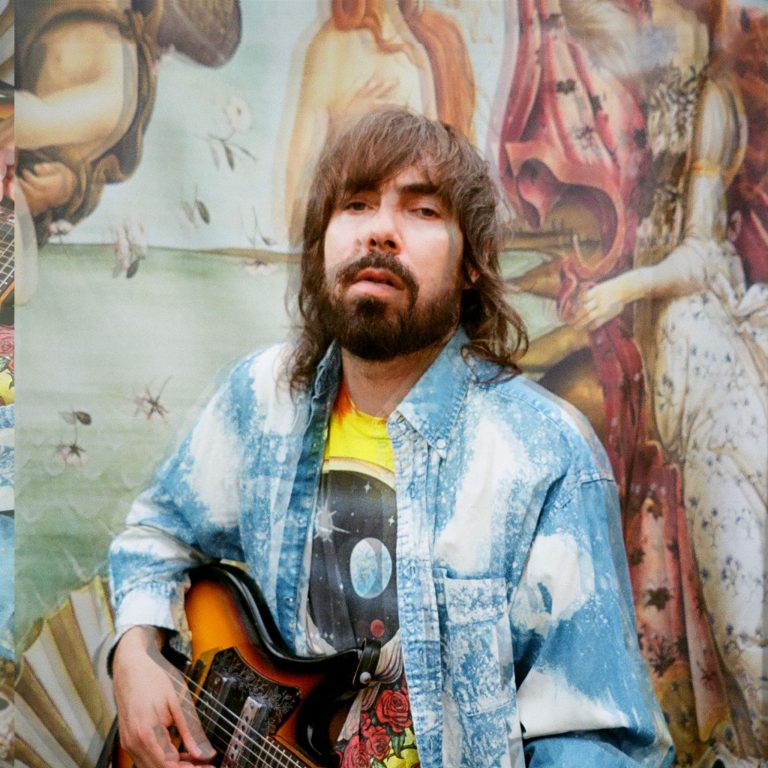 Sam Goldberg Jr. is a guy who is kind of all over the Canadian music scene map. He’s a guitarist in the supergroup, Broken Social Scene, played bass in Bodega, and helped guide the alternative rock sound in the early 2000s, he’s been nominated for the Producer of the Year at the Felix awards in Quebec—the list of accolades goes on.

All throughout his career, peers, and friends always encouraged Sam to release his own solo record, but it wasn’t an easy task. He essentially started from scratch after being disappointed with the result he created and approached the new project as a painter does a painting—by picking a palette of sounds to work with.

The self-titled debut is a fantastic offering of grooving psych-rock but features bongos, flute, saxophone, and a good amount of wah-wah. We spoke to Sam about his creative process, love of the wah-wah and fuzz, and working with the ‘International It-girl,’ Tess Parks.

PAN M 360: I had no idea what to expect for this solo debut from you and I kind of just threw it on and immediately got the psych-rock/garage influence.

Sam Goldberg Jr: I wasn’t quite expecting it to turn out that way. I actually, made an entire album before this one. I started in about 2018 and I didn’t really know what I was doing. I just knew I wanted to make a record. I had people over the years saying, ‘Hey, man, you need to do your own record.’ So I made a record and I didn’t like it because there were too many ideas going on. And the songs didn’t fit with the range of my voice—I got a low baritone vocal. And lyrically, it didn’t feel right. And I spent all this money and then I was like, ‘Fuck this. I’m not putting this out. Because I’m not happy with it.’

PAN M 360: That sounds like a bummer. Taking all that time and then starting from square one. What made you try again?

Sam Goldberg Jr: I was hanging with a friend of mine and he was telling me about how Boards of Canada—before they even start an album—they choose the palette of sounds that they’re going to use before they make an album. So at the time, when I shelved the first record I made—this is probably at the very beginning of the pandemic—I said to myself, ‘What are the sounds that I like, currently?’ Similar to how you’re gonna make a painting, maybe choose like six or seven colours, and like that’s all I’m going to use. And at the time, I loved fuzz guitars. I still love fuzz tones. And for some reason I developed … I don’t know where it came from … but a love for the wah-wah pedal. I don’t know why that happened.

But I said to myself, ‘I want to have a fuzz guitar, a wah-wah guitar, bass, drums, my vocal and this one synthesizer I really like called the Korg Delta.’ So it was like, ‘That’s going be the album.’ And then once I had that palette of colours, it just came together so quickly, because there weren’t so many options. Sometimes there are just so many sounds and shit can get stuck and lost. But if you limit yourself to something, it’s really very helpful.

PAN M 360: It was really refreshing to hear the wah-wah pedal all the way throughout this psych-rock record. It’s funny because a lot of guitarists have a wah-wah pedal, but they’ll use it only every now and then. It’s kind of synonymous with the psychedelic genre, but also just like ‘70s funk, but the way that you use it is kind of droney.

Sam Goldberg Jr: Yeah, you have to be careful, because you’re right. It’s like there’s a 70s funk thing. And you know, I wanted to use it in a way that wasn’t cheesy. There’s some cheesy wah-wah out there.

Sam Goldberg Jr: What’s the guy’s name who played with Mazzy Star? I think he died recently. I can’t remember his name [it’s David Roback], but the way he used a wah-wah was really cool. It’s sort of very messy and sort of in the background, it’s not too apparent. I think maybe that’s where I’d heard of and thought ‘That’s a nice use of the wah-wah.’ But going back to the creation of the record, there was a small window before I made this record, and I shelved the other one, when I wanted to make something mellow. I wanted to make something for like a 3 pm to like 6 pm hanging on the fucking lake or on your deck or whatever. Because I’m a mellow guy and I don’t really like super aggressive music.

I had just seen that movie The Big Lebowski and I was like, ‘What would the Dude’s band sound like? I’m gonna make a record from his perspective.’ He wants to live this chill existence, like all of us and obviously, there are obstacles every fucking second of the day that we need to deal with, but what would his band sound like. I tried that for a while. And some of the songs were sort of dressed up in a more mellow fashion. But then it wasn’t really working and that’s when I discovered the palettes thing.

Sam Goldberg Jr: Yeah it was definitely mellower but then it got replaced with the fuzz stuff and I don’t know, maybe I just like more intense tones? And maybe I’m just not ready to be that guy sitting on the beach playing an acoustic quite yet. Either way, I’m kind of shocked, to be honest, that I made an album that I’m happy with. I’m just very happy that I put a record out. And that people like it. And you know, it’s being the CBC is spinning it which is cool. Like I didn’t get a grant or FACTOR or anything. I just paid out of my own pocket to make this stuff because I just love making music and I’ll always make it.

PAN M 360: I played this album when I was just walking in Montreal one night and the song “Sweet Face” came on and I was like ‘Is that Tess Parks’ voice? I’m an avid listener of Brian Jonestown Massacre and they’ve worked with her quite a bit so I immediately recognized her voice and the harmonies you guys have in “Sweet Face” are gorgeous.

Sam Goldberg Jr:  That came at the end of the record. I wanted another voice for again, another colour, and I reached out to a friend and he was like ‘Tess Parks would be perfect on this.’ And of course, I know who she is, and I know who she has worked with. So I was hesitant to reach out because I just feel like I’m just this drip, Orc musician. And she’s, like, International ‘It’ cool girl. But I sent her the song and she right away responded. She’s like, ‘I love this. I want to do it.’ So I was really excited that she did it and I just love her voice. She’s got so much character … It’s so low and growly and raspy. I really want to do some more music with her and I think she’s on board. Maybe a new project or maybe more skating around some of my songs or whatever. But yeah, we both sort of come from the same place and love of certain music, which I didn’t realize so much before. But she’s amazing. I’m a huge fan. I think she really saves the song.

PAN M 360: And there’s also flute and saxophone on this record. Where did that inspiration come from?

Sam Goldberg Jr: I think there was this band, The Sound Carriers, I think? One summer I was camping with a group of friends and we were sitting there and I heard some flute in just one song I was like, ‘That’s fucking a beautiful sounding instrument.’ And it just sort of I put it in my notes maybe I should put the flute in the song. And you know saxophone as well just, I was having trouble with that first song on the album, “You Lock The Door, I Broke The Window” with the outro. I didn’t want to put another guitar solo. And I just thought, ‘Hey, maybe a sax would be nice there.’ Throughout the album, you’ve got to hear something as sort of a cohesive piece as if it’s one long song. So it’s nice to have little different flavours coming in and out. So it was more of just to allow the ear to have a little taste of something different.

PAN M 360:  Have you approached playing this album live too?

Sam Goldberg Jr: Yeah, I guess I will. I mean, I wrote the songs so that they would be presentable in a live setting. Because I do enjoy playing live. And I have some guys playing with me—one of the guys who plays in Broken Social Scene as well, Brendan Canning on bass. I got Sam Roberts’ drummer, Josh Trager is playing with me. And this really amazing guitarist who goes by Champagne James Robertson. Someone recommended him to me in the beginning, and I saw him play some stuff on YouTube. I was like ‘There’s no fucking way this guy’s gonna play with me.’ And I sent him the record and he liked it. So yeah, some live shows will happen.