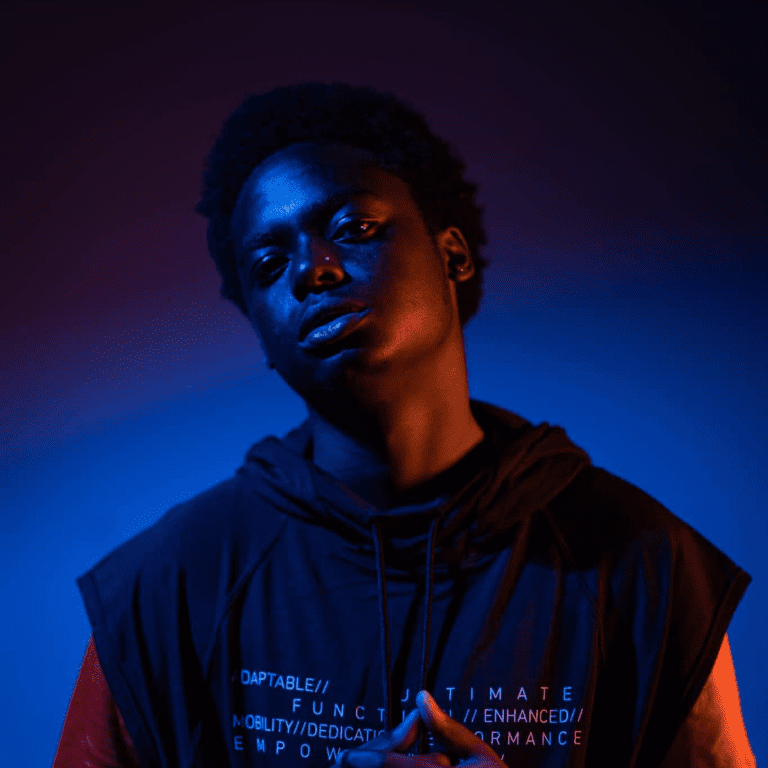 Heavy lyrics over light productions – Raccoon works in the antithesis on his new project Le set up.

“When I was younger, in high school, I often spent my nights writing. I would wake up in the morning with big black circles under my eyes, so my friends called me ‘the raccoon’.”

The year 2020 was a banner year for Raccoon. After being named Radio-Canada’s Hip-Hop Revelation 2020-2021, and publishing a monograph on systemic racism, he unveiled his third album, Le set up.

“This is a very good year for me, I realized that I got more attention than I thought,” says Shamyr Daléus-Louis. “However, the fact that it was a tough year for everyone was a bit detrimental to the branding.”

The quarantine caused by the COVID-19 pandemic is also at the source of the concept of Le set up.

“During the lockdown, there was a lot of negative energy in my head,” he explains. “I imagined it was like a big trap that we fell into. I remembered where I’d been and thought I’d seen worse.”

The rapper from Pointe-aux-Trembles wanted to push this trap concept as much on the substance as the form of the album. Working notably with French producer 94showtime, Raccoon has somewhat modified the mood of his music to make it more accessible.

I felt I didn’t want to do anything too aggressive, too dark,” he says. The productions that 94showtime sent me were very upbeat, very soul, very pop. It allowed us to make an antithesis in the music, with heavy subjects and a light atmosphere. »

In early summer, as a major movement for racial equality was taking shape here and elsewhere, Raccoon released the song 19-2 “in support of the troops who were demonstrating”.

“I come from a housing project in Pointe-aux-Trembles,” he explains. “Given the large majority of black boys living there, we were often subject to profiling. I wanted to be a model, to say that we can also use rap to talk about that today.”

However, the rapper abandons the issues of systemic racism and police brutality on Le set up, which is intended to be more introspective.

“It’s really a project that concerns me personally,” he says. “Gentil pour un noir was an album to introduce myself. Le set up is more for those who already know me: here are eight tracks while waiting for the rest.”

Although he considers that he may eventually have to leave la Belle Province to make a living from his trade, Raccoon proudly defends the Quebec hip-hop scene.

“I think we have the most complete rap scene. It’s wonderful, what’s happening with keb rap. The disadvantage we have is that we lack structure, and people who talk about us. We’re brand new and fresh, it’s normal that it takes a little time.”

From a personal point of view, Raccoon feels that he still has a lot to do in his career to move to the next level – and with that, the pressure that comes with his growing notoriety.

“I can’t stay an emerging artist all my life,” he jokes. “My career is evolving and I’m under a bit of pressure to fill rooms and really make it.”

While waiting to make like Loud, his favourite local rapper – Raccoon is “fascinated by winners” – who boasts of only playing to full houses, Raccoon reminds us of his desire to remain authentic in his quest for success.

“My goal is to be the best, the one who sells the most,” he says. “I want to go as far as possible while remaining myself, with as little compromise as possible.”