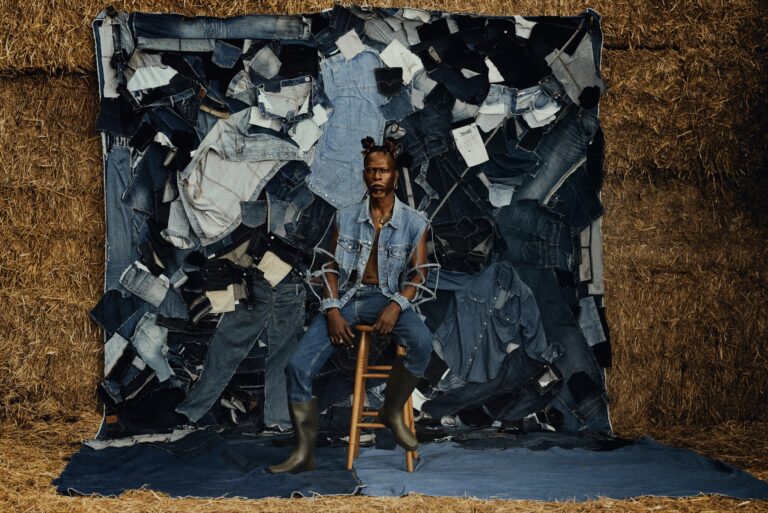 The multilingual, Congolese-born, Montreal-based, Pierre Kwenders has established himself as a modern contemporary and architect of African and afro-fusion music over the years, and with his latest album José Louis and the Paradox of Love—an undertaking that took four years to complete across multiple cities featuring collaborations with Win Butler, King Britt, Ngabo, Sônge, anaiis, and more—he pushes the sonic envelope even further. The album title sounds like a psychedelic art house film and spliced up next to Kwneder’s music videos, it kind of is.

Blending a diverse collection of love stories and abstract romantic metaphors, Kwenders has released his most personal album to date, naming it after his birth name José Louis. Kwenders moved from Kinshasa to Montreal back in 2001 and has been a staple in the scene ever since, joining the Afrika Intshiyetu choir, and eventually starting the Moonshine party series in Montreal—slowly turning it into a globe-trotting event.

We spoke with Pierre ahead of his May 6 show at the Phi Centre about the impetus behind José Louis and the Paradox of Love, his inspirations (most notably the Congo’s Papa Wemba), and his future plans.

PAN M 360: There’s a lot of romance on this new album. Are all these stories derived from truth or personal experiences? Is a song better if it actually happened?

Pierre Kwenders: Definitely, all the stories told here are derived from the truth and only truth. Whether it was a personal experience or not, some of them have definitely helped me learn more about myself and my surroundings. I think a song is better when it can speak directly to the soul. That does not always depend on if the story happened or not.

PAN M 360: How did you decide who would collaborate with you on this album. You’ve got Win Butler, Shabazz Palaces, and King Britt?

Pierre Kwenders: Tendai Maraire produced (Big shoutout to him) my previous record and together we were able to create a sound. I wanted to take that further and blend into my DJ world. On “L.E.S. Liberté Égalité Sagacité,” Tendai approached King Britt to join in the jam and when we linked in Nola to work on some music, Win added his magic. I believe everything just happened organically. Music brings people together!

PAN M 360: Your stage name comes from your grandfather correct? And your real name is Jose Louis, so why release an album now in reference to your real name?

PAN M 360: You sing in five different languages, is one easier to sing and write in than another?

PAN M 360: You wrote this album in different cities in the world, do you think of a specific place you used for inspiration?

Pierre Kwenders: I like to always be out of my comfort zone. Being able to travel and record in so many cities, helps me channel my inspiration in different ways every time. There is no specific place really!

PAN M 360: The whole album is multiple genres and very layered, but “Papa Wemba” is really an amazing single-track. What is that one about? A reference to the Papa Wemba film?

Pierre Kwenders: It’s simply my homage to one of the greatest that ever lived. Papa Wemba was the King of Rumba. He has opened so many doors for Congolese artists and has inspired generations. I believe there’s a bit of him in what I do.

PAN M 360: Yes you’re kind of embodying the Papa Wemba style now that I think about it.

Pierre Kwenders: I’m a kid who sometimes wishes that he was born in Village Molokaï!!!! (Village Molokaï is the name of Papa Wemba’s headquarters in Kinshasa)

PAN M 360: And “Church” has a full choir in the track, the “Afrika Intshiyetu,” choir you were a part of many years ago? What was it like to collaborate with them again?

Pierre Kwenders: Afrika Intshiyetu is the choir where I started singing. It was always a dream of mine to have them on one of my records. Having them on Church was a dream come true. It’s a full-circle moment!

PAN M 360: How are the Moonshine parties holding up with the pandemic?

Pierre Kwenders: Great! We travelled the world and touched new cities such as Kinshasa, Brussels, London and Lisbon. It’s great to be a great summer – Our latest mixtape SMS for Location Vol.4 is nominated for a JUNO. We have Vol. 5 in the making right now. Zaire Space Program our documentary is in editing. Look out for Club Sagacité, a multidisciplinary artistic and community space that will be launching soon. Let’s just say, we haven’t been sleeping.