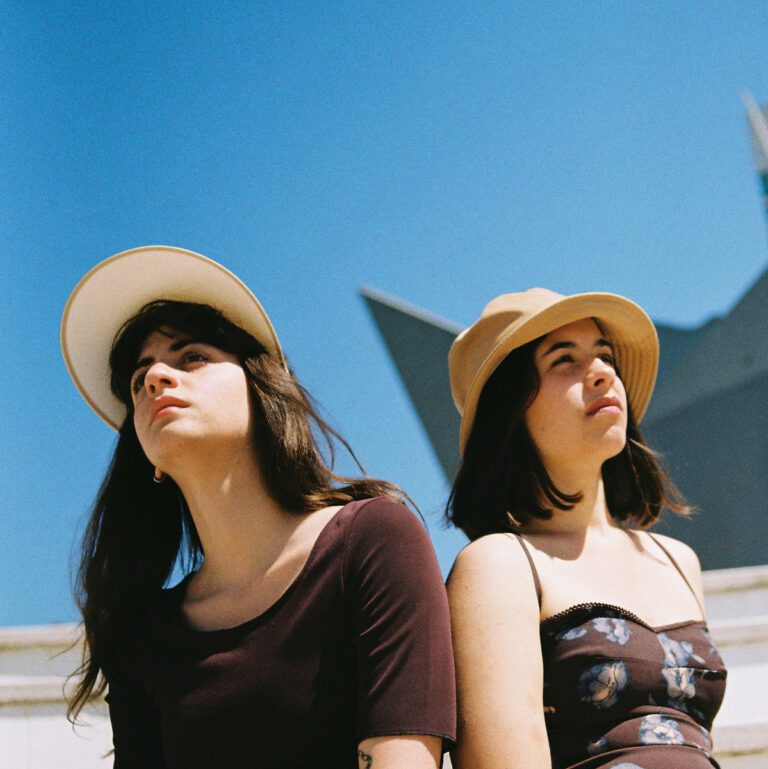 Tarta Relena, a Catalan duo made up of contralto Marta Torrella and soprano Helena Ross, was initially dedicated to a cappella singing. And then…

Tarta Relena stands out even more from the folk movement with elegant electronic juxtapositions that brought them to MUTEK Montreal, this Thursday alongside singer, instrumentalist and composer Marina Herlop, and this Friday under the Tarta Relena banner.

Their discography includes the EPs Ora Pro Nobis (2019) and Intercede Pro Nobis (2020), as well as the album Fiat lux (2021). The artistic direction of MUTEK (thank you Marie-Laure Saidani!), took the slap, especially for the striking impact of these Catalan voices before an audience. It’s our turn!

This totally justifies this detour to the lobby of their hotel, shortly after their arrival in Montreal.

PAN M 360: Tarta Relena has perfectly understood that ancient, baroque, and traditional music work very well with contemporary aesthetics. How did you make the connection?

MARTA TORELLA + HELENA ROSS: Good point! We agree. We actually started singing in a choir when we were teenagers in Barcelona.

PAN M 360: Baroque and early music are rooted in the city of Barcelona, you can attend concerts parties, chamber orchestras, and choirs.

MARTA TORELLA + HELENA ROSS: That’s right, there’s a lot of that in this city, it’s a kind of cultural dynamic for us, an important part of our culture. A lot of young people sing in choirs and we were part of that movement. So we became friends, and we started to sing more seriously.

MARTA TORELLA + HELENA ROSS: Yes, we also like to mix vocal techniques related to choral or individual singing from different cultures and periods of music. It can be very lyrical but also rough!

PAN M 360: How did you envision mixing singing with electronics?

MARTA TORELLA + HELENA ROSS: You know, it wasn’t very planned, it was something… natural, instinctive, just like our vocal work. We use the voices in a very natural, organic way. And then we tried to stick to synthetic instrumentation to the voice, in order to create a contrast. We look for this contrast.

MARTA TORELLA + HELENA ROSS: Yes, we like our voices to travel. The vocal melodies can be independent and meet in different ways. For this, we have studied the techniques used.

MARTA TORELLA + HELENA ROSS: We do sing in Catalan and Spanish, but also in Latin, ancient Greek, etc.

PAN M 360: You’re not looking for cultural purity, it goes far beyond the Catalan culture.

MARTA TORELLA + HELENA ROSS: Nothing is pure! We keep finding the cultural origins of the expressions as if they were hidden in the old songs, whose authors we do not know. It’s very inspiring for us to add our research to this fascinating ancient music, or to use it as inspiration for our original songs.

PAN M 360: What kind of musical education did you have?

HELENA ROSS: I did classical and baroque singing, and Marta followed other paths. Of course, we also learned choral singing.

PAN M 360: What is your accompanying equipment?

MARTA TORELLA + HELENA ROSS: We use Ableton Live and two MIDI controllers. We trigger the accompaniments. These sounds do not move once triggered, however, we can improvise vocally by adding new variations to our song in real-time.

PAN M 360: Your album was released less than a year ago. Do you have another one in the works?

MARTA TORELLA + HELENA ROSS: No, we are in a concert phase that will last several months.  Then there will be another phase. Most likely, this phase will be very different from what we do and have done. We are always ready to look, to experiment, to start something else. But… at the moment, we have no clear idea!