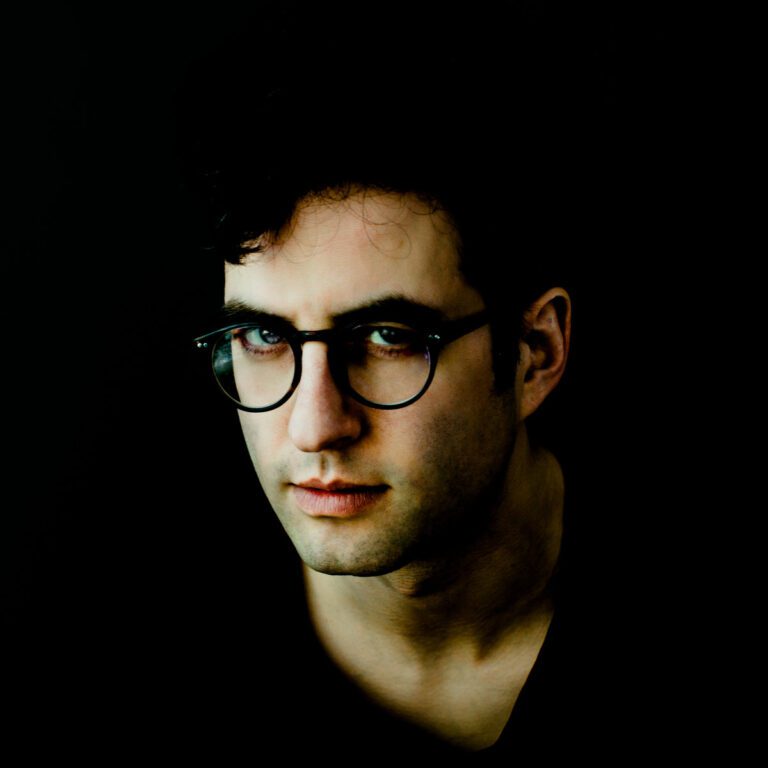 The Trois-Rivières-born Québécois living in Berlin previewed his new album “Begin Within”, his first release at Mutek 2022, at MTELUS last Friday for the Nocturne 3 program, which also featured the fantastic Cora Novoa and the genius Luke Slater.

At the crossroads of contemporary music, dark techno and hypnotic ambient, Nicolas Bougaïeff is a multi-talented composer with a wide range of production techniques and, what’s more, an individual always looking to share his erudition.

He is invited by the biggest European techno clubs such as the Berghain or the KitKatClub. He performs in Israel, Poland, England. He shares the stage with Richie Hawtin, Daniel Miller, Anna, FJAAK, Ben Clock, Blawan. He creates software and applications. He teaches electronic music in his own school. You will have understood that Nicolas is a music scholar.

Best known for his techno made of darkness, decadent and monolithic rhythms, he multiplies breathtaking dance atmospheres.  In the context of MUTEK 2022, he came back to Montreal, at home in Quebec, with a new concept: the album Begin Within, which will be released in November. The album is as dark as ever, but this time with a different approach.

For him, “it’s a new take-off” that consists in revealing a part of his intimacy. Terrified of having to share a closeness with others because it brings him to his own vulnerability, Nicolas nevertheless talks about it with PAN M 360.

PAN M 360: Nicolas Bougaïeff is known for his dark and dancing techno, but for your first performance at MUTEK, you chose to present a preview of your new album Begin Within, due out in November, which is more electro-experimental and sung. Tell us about the genesis of this new project.

NICOLAS BOUGAÏEFF: I composed this new album as a reaction to states of mind, very vague sensations…very strong…that followed me and overwhelmed me for years, in fact. I felt trapped in frames. This album is the fruit of something that was growing inside me for a long time. I have many fears to exorcise…

PAN M 360: When you talk about fears, can you tell me what they are precisely? What did you want to externalize?

NICOLAS BOUGAÏEFF: I really have a lot of fears! (laughs) The ones that prevent me from functioning are those of intimacy, honesty and vulnerability. There’s nothing innovative in what you’re saying, maybe, because it’s a human experience that is common to all of us, I think. For me, it’s the fear of the other and the intimacy that could come from it, as well as exposing oneself honestly.

PAN M 360: Do you think this album is the most personal or intimate you have done so far?

NICOLAS BOUGAÏEFF: All my musical compositions are very personal. I put a lot of myself into it, but with Begin Within, it’s definitely intimate. Intimate, both in the musical composition and the choice of titles as well as the lyrics.

PAN M 360: If we compare your album Deckalog, dark, dancing, monolithic techno, released very recently, and the upcoming album Begin Within, the musical contrast is very strong. However, knowing your formation and your career, it seems to me rather coherent. In any case, definitely, the darkness remains present but under another musical angle. The novelty is the contribution of your voice on all the titles. For me, to put your voice is to give a part of your humanity. How did you live this experience of singing?

NICOLAS BOUGAÏEFF: I never worked on my voice and never took singing lessons. I worked with a new instrument that I didn’t master at all and that helped me to make it even more intimate because I went into it naturally, without thinking. So I focused on intimacy and emotionality. I totally exposed myself. Not being able to hide behind professional singing skills made me feel very free, more free than when I compose.

PAN M 360: How do you think the public will receive this new performance?

NICOLAS BOUGAÏEFF: For me, it’s a new take-off. I know that people know me more for club or rave music, but I don’t want to anticipate the public’s feeling. I let people do what they want with my music. However, deep down, I hope people will be transcended by my music and touched by the intimacy I want to share with them.

PAN M 360: Originally from Trois-Rivières, you studied classical music at McGill University and at the Conservatoire de musique de Montréal, then you obtained a doctorate in minimal techno. Not finding enough space in Montreal to evolve in your field, you moved to Berlin in 2005. Your first apartment was right next to the mythical Berghain. From there your revelation was born and your career blossomed naturally. Your music, I think, reflects all this long and rich experience. “Saccades et Paroxysmes”, a recording released in March 2022 on your label Denkfabrik, is an experimentation between electronic texture and the improvisation of a French pianist, Justine Ekhaut.  Definitely techno, your acclaimed first album, The Upward Spiral, was released on the Mute label in 2020. My feeling is that your eclecticism is a logical consequence of mature reflections and a process of intellectualization of your practice. Your techno is hyper refined, hyper efficient. What do you think about it?

NICOLAS BOUGAÏEFF: Thank you very much. It touches me…My journey into techno has been an exercise in integration, actually. I have a range of techniques that allow me to apply different methods of music composition in a broad way. I experienced it as a way to fully immerse myself in the Berlin techno culture. Berlin was naturally welcoming to me. I had the chance to release my music on different labels, to play in many clubs and to meet artists who trusted me. I fed off all this atmosphere to work on my music. I like to push my limits as far as possible and I juggle with the rules.

PAN M 360: You have been fortunate being able to collaborate with Richie Hawtin by founding the software creation company Liine in 2010 and the MIDI/OSC app Lemur. Then you founded the Berlin Academy of Electronic Music. When I said earlier that you intellectualize your music, it’s also in connection with these projects. We are in a virtuous circle: artist, developer of production tools and teaching. I would like to know what led you to develop these tools that you have successfully commercialized and this idea of a music school.

NICOLAS BOUGAÏEFF: For me, these are great themes! I wanted to learn music from A to Z, to be as erudite as possible on all aspects of music. I know that it is difficult to be an expert in all fields, but I was thirsty for knowledge. I’ve never done jazz harmony and that will be my next challenge. But, I’ve gathered as much knowledge as possible about the concepts of music, its history, its practice, the different styles etc.. The tools developed with Liine are the result of a coincidence because they were tools that I had created for my own musical practice. Then a colleague discovered what I was doing and put me in touch with Richie (Hawtin) who was won over by the tool. At that time, I didn’t have many gigs under my belt. And that was indeed a big door opener for the next thing. As far as my music school is concerned, it is the fruit of a natural process for me. I have been a teacher for more than 15 years. My desire was to make up for the lack of teaching and training in electronic music. When I was young, it was very rare to have courses on this musical domain contrary to other styles of music. I also come from a family of teachers, so I’ve always been immersed in this field. For me, it’s part of the game. You give and take.