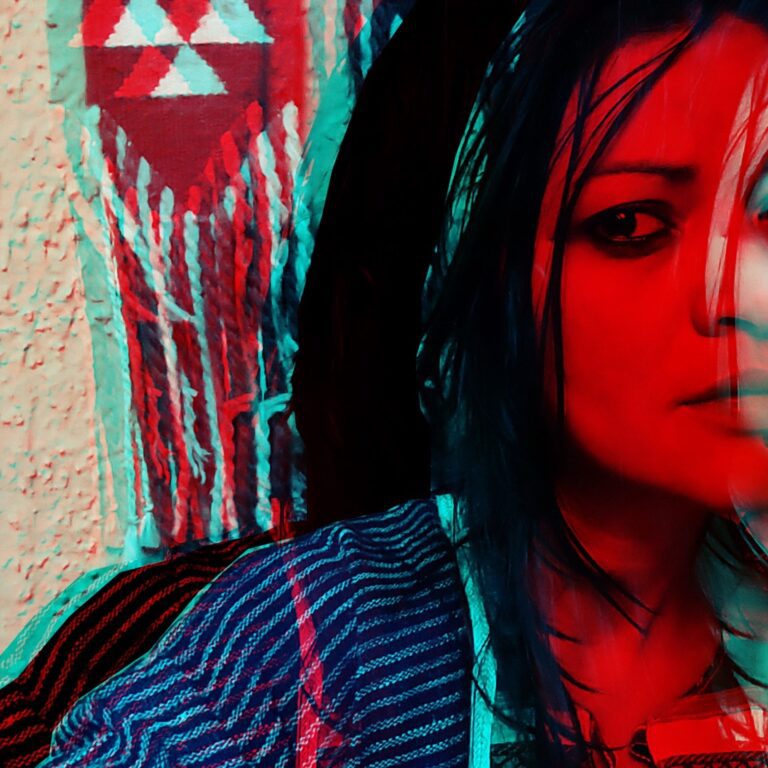 Donia Leminbach is enjoying the full freedom she gained with the re-launch of her career, marked by the release of recordings under the Draw Me A Silence banner. A few years ago, the producer began a new chapter in her life.

A divorce, the heritage of a small palm grove built by her late mother in the Tunisian Sahara, a life divided between the southwest of France and her mother’s house. These personal events coincide with a real professional success in the circuits related to the genres and subgenres techno, dub, breakcore, hardtek, bass music family.

Given the success of her recent recordings, she travels around North Africa, France, the world… All this also coincides with the appearance of her new alias, Azu Tiwaline, which will be highlighted this Sunday at MUTEK.

PAN M 360: Tell us about the birth of Azu Tiwaline, this alias that brings you authentic success.

AZU TIWALINE: I am based between the south of Tunisia and the southwest of France (on the border of the Landes and the Basque country. In Tunisia, I stay quite close to the Chott el-Jerid, a vast saline plain which is in fact an old dried-up sea and which sometimes covers itself with a few centimeters of water, once or twice a year. It becomes another magical landscape. Five or six years ago, I decided to live there and come to France from time to time. My mother, twenty years earlier, had bought a piece of land with sand, she built her house little by little, she planted palm trees little by little, she passed away 5 years ago and I decided to settle there. It is a small palm grove, it is really a paradise there but I have to take care of it and I am an only child. For two years now, I have to spend half of my time in France, because it’s not easy to spread out in Europe and in the world from Tunisia. That’s why I have another base in the southwest of France, which allows me to travel.

PAN M 360: Going back to Tunisia was necessarily a great source of improvisation, how does this manifest itself in Azu Tiwaline?

AZU TIWALINE: So I was born in France of a Tunisian mother and a Cambodian father, but I grew up in the Ivory Coast, in Abidjan. I came back to France when I was 14 years old. I always had a link with France and the French-speaking world, my parents spoke French, it’s my mother tongue, so I quickly integrated myself into France. I then became interested in rave culture and started to make electronic music, having access to equipment from my friends who were making electronic music.

PAN M 360: How does your living environment impact your music?

AZU TIWALINE: There are rhythmic elements from North Africa in my music, I work on ternary rhythms, I also use instruments that can be found in Berber music. Also, I record a lot of sounds from my immediate environment, I like that we can situate ourselves with these sound recordings on the terrain of North Africa, the street, the village, the calls to prayer, a kind of sound postcard. But above all, there is an emotion underlying these sounds put in context, the desert in my music can also mean silence. And people can stick to the meaning they want. But I don’t claim to be a North African ethno-musician at all.

PAN M 360: You are more a citizen of the world, where you are is a matter of creation, isn’t it?

PAN M 360: Your aesthetic is clearly electronic, in fact.

AZU TIWALINE: I’m more techno and dub, even if this dub is not fundamentally reggae.

PAN M 360: How has your art evolved recently?

AZU TIWALINE: For the moment I am surfing on this wave from my first album under the pseudo Azu Tiwaline. I take advantage of this good energy, the support I received, it allows me to tour and continue the work of creation. Last winter, I finished composing a second album which should be released in 2023. That’s what’s happening in the short and medium term. And then in the long term, I don’t know yet. I want to do artistic residencies, which I’ve done many times before.  Another dream of mine in the long term is to be able to do film music.

AZU TIWALINE: Not really in a sustained way. I took music lessons when I was a kid but it didn’t produce the desire to be an instrumentalist, I don’t think I had any teachers to produce the click. It’s rather when I discovered electronic music in raves that I wanted to understand how the machines worked. I had friends who had equipment and that’s how it started. As a self-taught person, little by little, I bought machines, software, etc. I was doing all that at the same time. I was doing all this at the same time as I was studying, so I didn’t necessarily think I would make a career out of it. It was a passion and, at the end of my studies, I was already starting to earn a living with music. I gave myself two or three years to enjoy it and we’ll see.  More than twenty years later, I’m still making music. It’s going well right now but there are periods where there are ups and downs, there is no stable income, it’s the art of managing your emotions without panicking when there are less busy periods professionally.

AZU TIWALINE: I would translate Azu Tiwaline as ‘the eyes of the wind’. A Berber might not translate these two words like that, but for me, the combination of these two words can lead to this translation. In my imagination, at least, that’s how I perceived it, especially when I started living in Tunisia.  And so, when I finished my first album, I chose this alias to mark this change and create a new identity. Everything changed in my life at that moment, I wanted to signify the coming of this new cycle with a new identity.

AZU TIWALINE: I first received a warm welcome in England, this open door there allowed me to radiate internationally, while being close in my way to UK bass music. My signature at Livity Sound also helped me a lot in this sense, I was able to meet several artists that I admired and with whom I could make new collaborations. Then I have a link with the Tunisian electronic scene, which is rather experimental, rather noisy. Of course, I live in the Sahara and I’m not necessarily connected with the community of Tunis where it happens mostly, but I still have links. And here I like to spend a lot of time alone and live in the desert to enjoy this solitude.