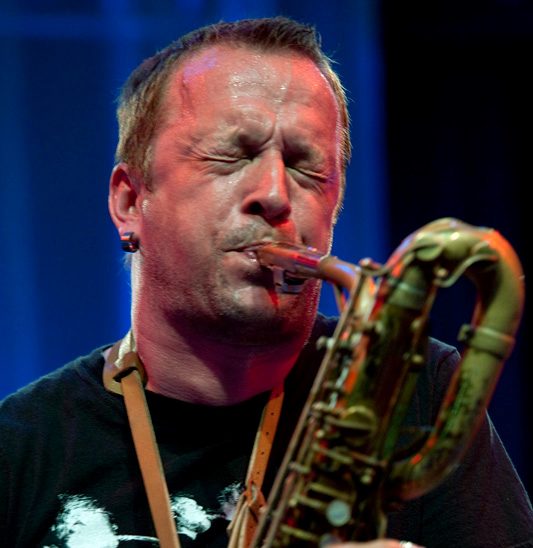 He is one of the true successors to the great saxophonist Peter Brötzmann but…  in 2022, we can’t really qualify him successor at 57 years old ?! In fact, he is a true international leader of free improvisation and avant-garde composition beyond free jazz. Mats Olof Gustafsson is a Swedish saxophonist, born in 1964 in Umeå, Sweden. Since the beginning of his international career in the mid-80’s, he added clarinet, keyboards and electronics in his tool box.

Mats Gustaffson is also an excellent speaker about his craft, PAN M 360 shares his comments before his performances at FIMAV this week-end. On Saturday, he will share the stage with Rob Mazurek and David Grubbs, and he will be involved in a power duet with Colin Stetson.

First, some questions about the trio concert :

« All three drove Chicago’s experimental music scene forward in the 1990s: MATS GUSTAFSSON with several free jazz bands and as a member of Peter Brötzmann’s Tentet, while he was staying in the US; DAVID GRUBBS at the onset of the post-rock movement in Gastr del Sol, his duo with Jim O’Rourke; ROB MAZUREK in a multi-stylistic approach under various iterations of his Chicago Underground project. »

PAN M 360  : Can you remind us what led you to David Grubbs, whom with you recorded the duet Off Road? How have you built this musical relationship?

MATS GUSTAFFSON : We met in Chicago in the mid 90s through my good friends John Corbett and Jim O `Rourke and we immediately started to work and hang out together. I played w Gast and I played other things together with David, on his solo records until we decided to record Apertura, our first duo.. followed up by a Swedish tour and recordings of Off Road. It ain’t over yet…

PAN M 360 : About Rob Mazurek, the 3rd playor of this Victoriaville concert, same question, how did you meet? How did you play together? What has been built yet or what is gonna be?

MATS GUSTAFFSON :  Also the Chicago connection. That is important. Chicago was BEAMING of energy and creativity in the mid / end of 90s… and still is. But that period in particular stands out. We played a few ad hoc things and we kept on meeting in all kind of places internationally. And when this chance occurred to play a trio we jumped at it….  The pandemic stopped all the plans… but  we will reboot now. All is open!

« They worked many times together, but never all three at the same time, surprisingly. That is, until May 2019. They jumped on journalist John Corbett’s proposition to play as a trio for a two-day engagement at The Underflow in Athens, Greece. »

PAN M 360: Is this trio an important step for 3 of you? How could you describe with words what happened in Greece ?

MATS GUSTAFFSON : No words can describe those things enough. It was pure creativity and pure SHARING. As simple as that. When chemistry works, both musically and socially…. What can you do ?  just go with the flow. This trio is super important to me, hell yeah!

« The Underflow » : present-tense music exploring a wide range of dynamics, at the crossroads of acoustics, electrics, and electronics

PAN M 360 : Above that, what can you add to make us understand the language elaborated between you guys?

MATS GUSTAFFSON :  Listen openly and you will get rewarded. All and nothing is in there. As it always should be. All possibilities. All rules. All non-rules. All perspectives. We bring in all our experiences to the mix… and when people are willing to share…. The audience will feel it. Listen freely. Think freely. Act freely – as simple as that.

« They made the venue’s name their own, and their debut album, culled from these concerts, came out in early 2020, followed by a second one recorded just before the first wave of lockdowns. These albums showcase the rich history between these three masters. »

PAN M 360 : Can you see the progression from the first live sessions and the 2 following recording sessions?

Development ?  i Have no idea. We move on. We deal with the past, with our experiences, individually and as a collective. And we SHARE . when this is true… SOMETHING happens. We can call it whatever we want. But we want to SHARE it. On stage. And with the audience. New things will happen. And again. And again. And again.

PAN M 360 : Will the Victoriaville concert offer new things  after what has been achieved ? What would it be, roughly or even more?

Yeah – let’s hope some new things will POP out! I’m pretty sure, since we have waited 2 years now to play together… it will be an EXPLOSION never ever heard of before. Followed by some bad- ass IMPLOSIONS – and if we survive that, we will try to play something entirely different  at the end of the concert. Watch out for THAT!

Second, a few questions about your duet with Colin Stetson

« Two giants of the saxophone will be sharing the stage, combining their diametrically opposed yet fully complementary approaches.

« COLIN STETSON has developed a highly original technique on bass saxophone where he subvocalizes while playing his instrument (his voice being amplified by a transducer). In solo settings, he favors long, multiphonic, loop-like notes that weave incredible ambiences. With other musicians, he can turn feverish and hard-hitting, as our audience heard in 2017 with the performance of his band Ex Eye.

PAN M 360 : With Colin Stetson, that we know quite well in Montréal, what are you looking for?

STETSON and GUSTAFSSON played as a duo for the first time in Vancouver in 2011, a performance chronicled on their sole album, 2012’s Stones. They’ve locked horns a handful of times since, moving deeper into their musical relationship each time.

PAN M 360  : Let’s keep this question in the program : « Where does that relationship stand 11 years later? You’ll have to be there to find out. »

MATS GUSTAFFSON :  Exactly – you have to be there to understand. We will use everything that has happened since 11 years , on stage. Together – in a sharing experience. The only real difference  this time is that we will use electronics as well. The « stones » album is solely acoustic. This will be different.

PAN M 360  : The 2 approaches are distinctives, can you see where and how they meet as a duet?

PAN M 360  : Do you have plans for a recording project? Other concerts?

MATS GUSTAFFSON : Oh , yes. Recordings HAS to be. And it will. It is all being planned.

The next step is me inviting Colin to be a soloist in my next big compositional work « Hidros 9 « , which be premiered october 1st 2022 in Warsaw, poland. Colin is featured soloist together with Hedvid Mollestad, Anders Nyqvist and per åke holmlander — in an interaction with Dieb13 and Jerome Noetinger and a 18 piece chamber ensemble. It will be WILD!!