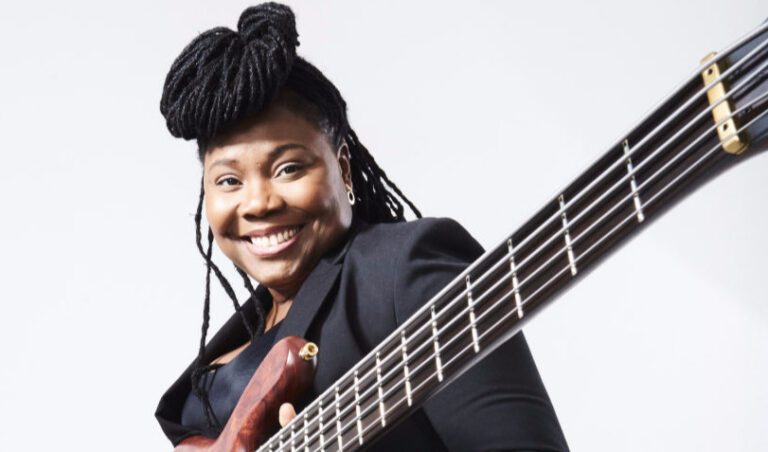 Manou Gallo: clarity, freedom and femininity, all to the bass guitar’s advantage

MManou Gallo is a woman, an African, and a bass player. As she herself says, it took a lot of hard work and overcoming the astonished looks (at best) of the essentially male and just a little bit black environment of the instrument (but that is changing quickly!). The former member of Zap Mama has been a solo rider for over 15 years now and is living out her childhood dream of holding a bass and playing it.

Gallo will be performing at the new Esplanade Tranquille in the Quartier des Spectacles on July 20th at 7pm, her first time as a soloist in Montreal. This will be an opportunity to get to know this musician, acclaimed by her peers, who will be presenting her most recent album, Aliso vol.1, as well as an overview of her four previous albums. Pan M 360 spoke with her.

Pan M 360: What can we expect on July 20th in terms of musical choices?

Manou Gallo: There will be a bit of everything. It will be a journey into the present and the past. I love revisiting past experiences, especially the good ones! There will be some Aliso, of course, but also pieces from Afro Groove Queen, and some pieces from previous albums. I will pay tribute to Manu (Dibango), Fela (Kuti), among others. I think it will be a great meeting.

Pan M 360: It will also be an opportunity for the Montreal and Canadian public, in general, to know you better. You’re a fairly prominent figure in Europe, you’re based in Brussels and you tour regularly on the continent. But here, except for the years you played with Zap Mama, it is much less frequent.

Manou Gallo: Yes, that’s true. But I’m even happier that it’s happening now because I’ve evolved a lot in my musical game. In my early solo days, I did a bit of everything: percussion, vocals, bass. But now I’m more focused. The bass is the center of my action, my creativity and my language. It’s much clearer in my head, and it shows in my music. And I’m very happy that this is what people will see in me!

Pan M 360: If we want to summarize your musical evolution, is there a common thread? Would it be the focus more and more concentrated on the bass as the engine of your music and your creativity?Manou Gallo: Yes, quite. I am a musician who has struggled for a long time to be able to clearly assume what she wants to do. You may know that I stopped playing for about 8 years (between Lowlin in 2010 and Afro Groove Queen in 2018), during which time I essentially stayed in my basement working on my instrument, perfecting it and mastering it better! I questioned myself, I worked on harmony to be better at it (I was originally a percussionist and I still play bass with a percussive color) and I finally found my essence. I acquired the tools to be able to express myself adequately. But it took time and hard work. I feel like my early career was going in all directions, left, right, all over the place, then the path cleared, the sun came out and now I’m coming in with renewed confidence. I can’t wait to share this with Canadian audiences.

Manou Gallo: Freedom. It is priceless. Being a woman and an African in the world of bass, it was a journey of hardship. I had to prove myself, and even twice as hard! Now, I make the music I want to make, according to my desires. I felt like going to visit jazz a little more, so I threw a pitch to Christian McBride, who was kind enough to enthusiastically accept.

Manou Gallo: Humility. Here is a very great musician, very learned and very humble with me. He respects me totally, and I respect him in return. The difference is obvious with some of the pop stars we see more, who spout off, who are sometimes full of themselves. It’s completely different with the kind of musicians that Christian is a part of. We are in dialogue with each other’s spirit. It’s beautiful and inspiring.

Pan M 360: As a woman and a bass player, do you have any advice for young girls who’d want to start a career like you?

Manou Gallo: I don’t think young women today need advice. When I was young, you had to go out of your way to discover music and get to know bass players. All I had was a cassette player and I had never seen Marcus Miller or Victor Wooten. Today, it’s all there, just a phone touch away on the web! Young people can see Meshell (Ndegeocello) live at any time of the day. Inspiration is available. You just have to want it.

Pan M 360: Still, do you feel that you have a role to play as a female model?

Manou Gallo: Wow! That’s a lot of responsibility! I know many women who are much brighter than me. I’m just a musician. But if anyone ever asks me for advice, I’ll be happy to answer, of course. And I’m always happy to meet a girl who wants to talk to me after a concert, that’s for sure.

Pan M 360: I heard that your grandmother was a cousin of Myriam Makeba? You have rubbed shoulders with her?

Manou Gallo: That’s an urban legend! I don’t know where this story comes from and why it is on the web. It’s even listed on Wikipedia. It’s not true. My grandmother was from West Africa, and Myriam was from South Africa. There was no connection. But anyway, I accept the reference, and it’s not unpleasant at all to be associated with this very great artist, but it’s just not true.

Manou Gallo: Difficult question, of course, but I would say three. Marcus Miller for the sound, the melodies. Victor Wooten for the fabulous technique, and Richard Bona for the ease of playing. If I can bring these three personalities together one day in my music-making, that will be wonderful!