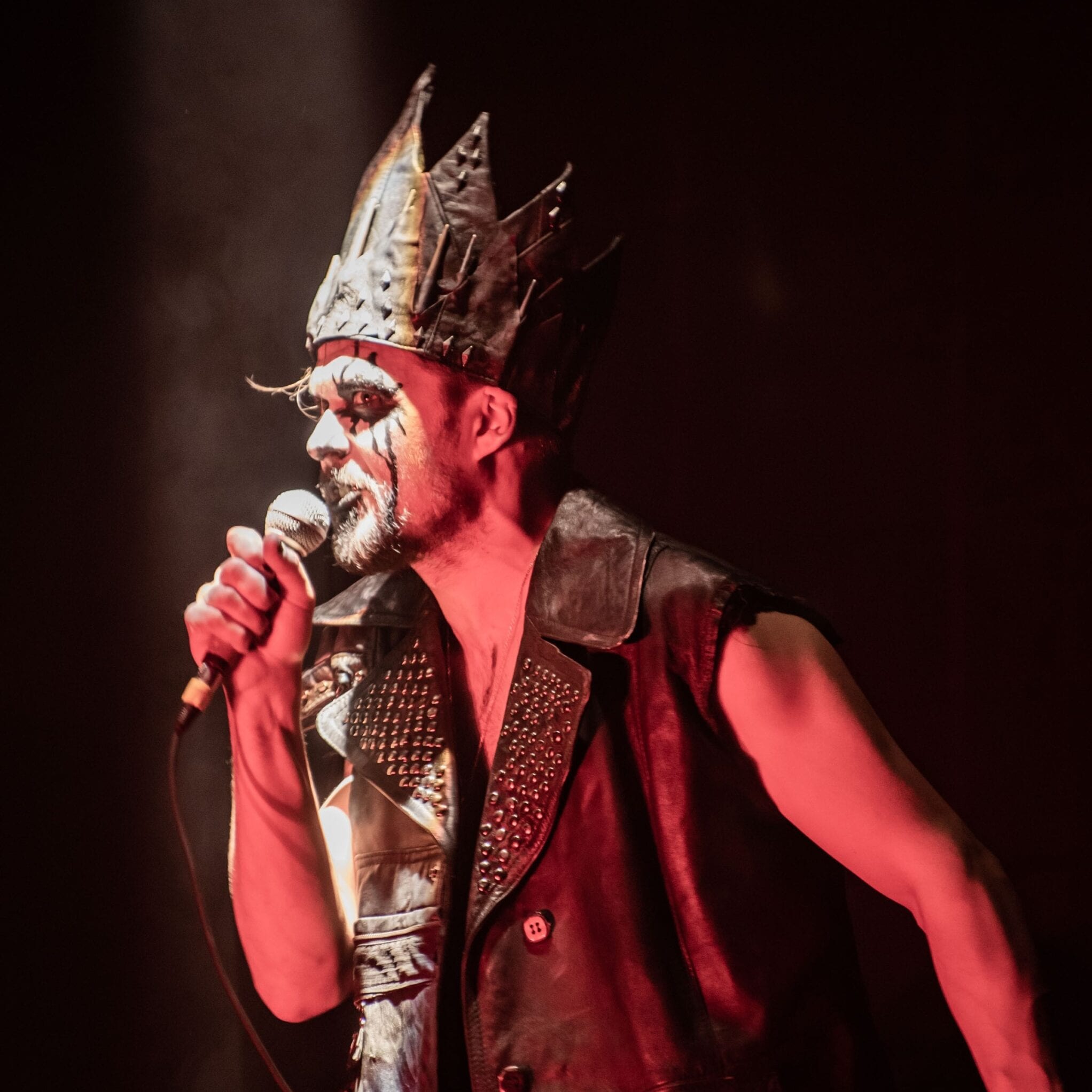 A heavy metal version of Macbeth is the crazy gamble that director Jocelyn Pelletier, noise artist and sound designer Érick D’Orion, and a handful of brave actors have taken on.

Past and upcoming events

Pelletier and D’Orion first worked together about eight years ago, on a reinterpretation of Ionesco’s Rhinocéros. Some time later, in 2015, they teamed up again for Radical K-O, a show inspired by boxing and the violence that underlies it, presented as the opening act for Mois Multi in Quebec City. It was at that time that the idea of making a metal Macbeth began to germinate.

“It started with a joke,” says Pelletier.

“We were like, oh wow!” exclaims Pelletier. “Then, once the idea was out there, we started thinking about it more seriously. Because the themes, the raw side of the work, the celebration of the occult forces, the whole mystical dimension… we thought it worked well with a metal concert.”

Shakespeare’s shortest play, but also one of his most frequently performed – it’s also been fodder for numerous film adaptations – Macbeth tells, in five acts, how the general of the same name, pushed by his wife, assassinates the King of Scotland to seize power, and how, prey to remorse and paranoia, the couple gradually sinks into madness.

The idea wasn’t to simply match the Stratford Bard’s play with a heavy metal rock score. The actors don’t only play their parts, they’re also the musicians, supported by a drummer, Sam Bobony of Black Givre and Avec le soleil sortant de sa bouche, and D’Orion on electronics, taking care of the ambient sounds.

On the other hand, the musical work to which the actors must devote themselves seems to lead them to play differently, in a more instinctive way, their intellect being so to speak occupied with mastering the musical aspect.

“For me,” continues Pelletier, “it was a challenge not to just take on professional musicians. Because basically, it’s a way to provoke the actors and bring them to a level of playing where they are more fragile, more instinctive. It’s like a way of diverting their attention to achieve more authenticity.”

Although sticking to heavy metal, the elements of the soundtrack are of quite varied influences.

“It’s not just a death metal show,” says D’Orion. “There’s drone metal à la Sunn O))), we also have stuff that nods to bands like Slayer or even Metallica.”

Of course, all sorts of possibilities had to be explored to ensure that the dramaturgical elements, the emotions experienced by the characters, and the music complement one another.

“We’ve been looking really hard. I thought it was in the dialogue, but in the end it’s the music that expresses what’s going on,” Pelletier believes. “This sound represents the anguish or anger of the characters, the camaraderie, the fraternity, the pleasure and also that of a band playing together, tripping out, until everything crashes down. So in my directing, I always had to give up something in favour of music, which becomes a vehicle, a language.”

However, the reins had to be kept tightly in hand to make sure the music didn’t deviate from the play, and yet remained true to the heavy metal aesthetic.

“A number of times,” says D’Orion, “the actor-musicians met up, wrote songs, and then they’d come in and show us what they’d done. So we were pruning in order to keep a metal spirit. You have to understand that we have Norwegian metal makeup. If we start doing rock ’n’ roll, it’s not gonna work.”

The music influenced the dramaturgy of the play in such a way that it shaped the play even more sharply.

“It’s really in two parts,” says Pelletier. “In the first part, we’re more of a band, we celebrate in a slightly more classical way, what you’d expect from a metal concert, with beautiful costumes and make-up. After Banquo’s murder, it’s like a second show, which goes in a strange kind of radicality. It goes into nightmare. They don’t sleep and nothing’s going right for the couple.”

“In the first part, in fact,” adds D’Orion, “if you have a theatre-only audience that’s never been to a death metal or drone metal show, people will see what they’ve already imagined. They’re going to see exactly what we expect.”

“The codes have really been respected,” continues D’Orion. “We’re in between a great show by a really famous band, and a band playing in the garage.”

“But who believe in what they’re doing,” adds Pelletier.

“While with the second part,” continues D’Orion, “we really fall into experimental theatre. Much closer to what I do. It borders on noise, abstraction.”

“That part belongs more to the two musicians,” says Pelletier, “and the actors are more in their original roles. So we’re entering into something very condensed. And then, anyway, we play with the fact that people know the story.”

“Everyone who saw our earlier versions,” notes D’Orion, “and who knew Shakespeare, all said the same thing – we understand, we don’t need anything else.”

Since the first flash, a little over five years ago, the maturation process has been a long one: residency in Quebec City, presentation at the Off FTA a year and a half ago, then last February at the Mois Multi in Quebec City, but it has paid off.

“The audience might wonder how far it will go,” Pelletier says. “In the stagings I’ve seen of Macbeth, the level of tension has rarely reached the level we’ve achieved. And that’s through the music and the show. The intuition that we have had is used on the level of the play, it brings all the theatricality. After having had big a six-minute death metal jam, everything’s more open.

“Maybe that’s it, because we’re raw, it’s more porous. The theatricality, the tension, the danger, they’re there. It’s like a new look. Because we know so much history, we need to do less. It’s what else we do that’s interesting.

“The second part is more dreamlike,” he continues, “there’s hardly any script left, except for a few monologues. The witches completely possess Lady Macbeth, and then, through the possession, we finally reach a stripping down, strangely. All that remains is the music. We end on solitude. After killing everyone, Macbeth is left alone with the ghosts of his girlfriend and the friend he killed.”

“The music prevents us from doing psychological theatre,” concludes Guillaume Perreault (who plays Macbeth), who arrived mid-interview, “and that’s why it’s really successful. It’s very exhilarating for the actors.”

For those who are concerned about decibel levels, it should be noted that production provides earplugs.