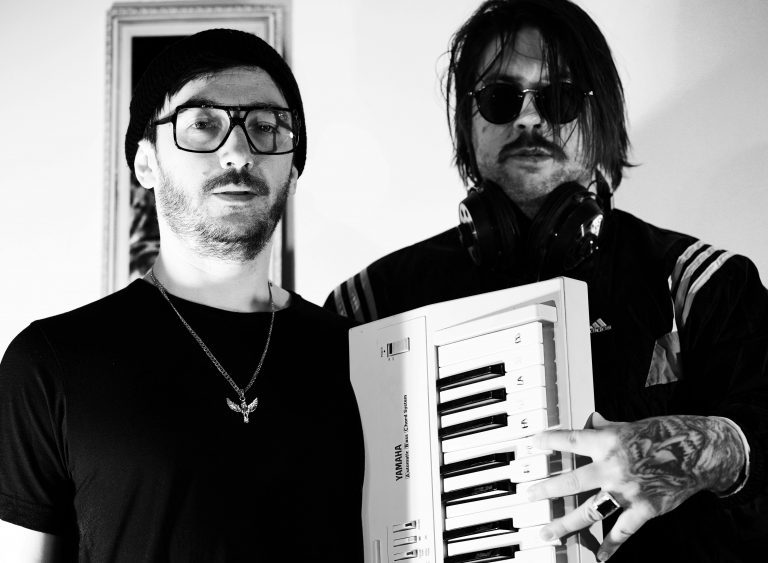 Prolific Montreal bassist Mishka Stein was stuck in quarantine after being forced to cut the last few shows of his Europe tour with chamber-pop artist, Patrick Watson, due to COVID-19, and began writing new, skeletal pieces of music.

No song on the self-titled debut album is alike. The opening track “Stanza Fresca” is a soothing synth number, while “Vaudevillain” and “Many Moons (feat TiRon & Ayomari)” throw in the welcomed addition of hip hop. Then there’s the brain-bending “King Blame,” which sounds like old school “Lust For Life” Iggy Pop mixed in a macabre German discotheque.

Both members of FHANG were able to share their experience with PAN M 360 about  crafting the diverse sounds on the self-titled debut, their self-directed music videos, Woywitka’s new label, Hidden Ship, and learning to play their songs live before their Festival de musique émergente show later this week.

PAN M 360: You’ve been categorized by some reviewers as psych-rock and while there are elements of that in your music, there are many more elements to the FHANG sound. A bit of hip hop, new wave, indie, post-punk…

Sam Woywitka: I agree. We’re getting added to, like, electro charts or whatever, like “new electro band FHANG, or like new Krautrock band, FHANG, new darkwave band, FHANG.” There are many different things we’re being called.

PAN M 360: Did you two know what kind of sounds you wanted for FHANG, initially?

Mishka Stein: I feel like I would just credit Sam for the sound because I was just working on Ableton, trying to write the music, but knowing that Sam would be the one who would change my shitty synth pad that I picked. You know, just make it sound way better and do a lot of treatment. A lot of a lot of my projects were just very kind of skeletal; the performance, but not so much the production.

PAN M 360: So Sam you crafted the overall sound of the songs in the studio?

Sam Woywitka: Yeah, I feel like I’m a puzzle-maker sometimes, putting pieces together. When I feel like I have a melody or a cool riff or something to go off of, I can kind of paste a journey together through that. Just having having that at my fingertips, I guess.

PAN M 360: You guys also made some music videos, like the one for “King Blame.” I think the description of the video is “someone’s lonely drug trip.” It’s kind of like watching a David Lynch film, with the rabbit head and everything.

Sam Woywitka: Thanks. He’s definitely an influence, for sure. That song kind of started out with me on a guitar and a drum loop, singing the vocal hook “I am the King of Blame,” and it sounded really angsty teenage me, you know?

PAN M 360: So is the video and idea of the song based on personal experience?

Sam Woywitka: Well, back when I was doing a lot of drugs, I felt like nobody fucking liked me. I just felt blame all the time. And if you’ve ever looked at yourself in the mirror when you’re hallucinating on drugs, you can’t even recognize yourself, and that shit is terrifying. So the video was really going to be just skateboarding and getting fucked up, but the day we shot it, I walked into this costume store and saw the crazy bunny mask. We wanted some skateboard shots when the sun was rising and I asked my buddy Issac to put on the bunny mask while skateboarding, and it just became the thing.

PAN M 360: It’s funny how it was just spontaneous and it became the crux of the video.

Sam Woywitka: For sure. What did Mishka say? Oh yeah, ‘Sometimes the monkey or your back is a rabbit.’

PAN M 360: You recently started the label Hidden Ship. Did you create it to release FHANG?

Sam Woywitka: That was definitely an inspiration behind actually getting it done and sinking my teeth into it. And now, I’m pretty excited about what the future holds. I have so many like talented friends and like artists that should just be better represented on a smaller label that cares more about their music.

PAN M 360: Right. So it’s not going to be independently for FHANG releases? Do you already have artists in mind for the label?

Sam Woywitka: I want to have these jam session writing sessions where maybe we’re making songs just for the sake of making really dope tunes with some crazy musicians, and then having a place to put that out, rather than it needing to be in a like some sort of artist’s discography. Maybe we can just do some cool productions and collaborations in the studio and eventually there could be a Hidden Ship record or something. I used to work in L.A. with DJ Khalil and that’s what his studio was like. People always jamming and him steering the ship, and then sampling a part for the next beat for Jay Z or Kanye West or something.

PAN M 360: Were there any artists you mutually drew inspiration from for this album?

Mishka Stein: I think the pandemic was our biggest inspiration for it. For me, it’s really infused with all the feelings we lived. The fucking Trump stuff and COVID and all this garbage. The first few months were just really primal. Primal reactions.

PAN M 360: Is that where the name FHANG comes from?

Mishka Stein: Yeah I think so. FHANG being the jaws of the wolf and it’s really just a survival thing—which is how we all felt in those first few months.

PAN M 360: So how do these songs translate to a live setting? Being a duo, I assume playing live is a lot of multi-tasking for both of you?

Mishka Stein: Like crazy. Sam’s doing all the modular synths, singing, and playing drums. I’ve got a synth in front of me, bass pedals for the lower notes, and I’m rocking a double neck guitar/bass. So yeah, it’s going to take a bit for it to feel comfortable.