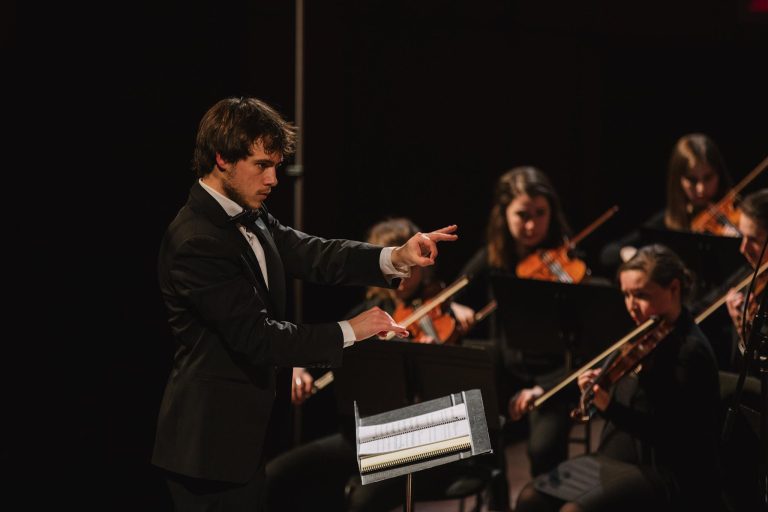 Beginning and ending with a similar aria, the famous variations were written by Johann Sebastian Bach for his pupil Johann Gottlieb Goldberg, who was to play them for the insomniac Count Herman Karl von Keyserling in order to soothe him into a restful sleep.

Nearly three centuries after their composition, the Goldberg Variations are among the most frequently performed works for the keyboard. A recent phenomenal performance was given by the great Hungarian pianist András Schiff at the Bach Festival last October at the Maison Symphonique.

Let us now embrace the orchestral extrapolation of this fantastic work, another demonstration of JSB’s contrapuntal genius. So ?  Do JS Bach’s Goldberg Variations retain their intrinsic qualities when adapted for instruments other than early keyboards, organ or piano?

This question has already been answered: thanks to its founder and original maestro Bernard Labadie, Les Violons du Roy have been eloquently demonstrating this since 1999. And they’re doing it once again this Sunday at the Bach Festival with maestro Nicolas Ellis, who has just been appointed Principal Guest Conductor for a three-year period beginning next September.

For PAN M 360 readers, Ellis explains the issues of this adaptation.

PAN M 360: Is this orchestral adaptation an aesthetic problem? Usurpation, or heresy, according to the purists?

NICOLAS ELLIS: I personally believe that the Goldberg Variations is much more than a work for this or that instrument. It’s an extraordinary counterpoint and it’s also interesting to appreciate it in string trio, in string orchestra, for other formations. So it’s a great adventure to embark on Bernard Labadie’s project, especially since the musicians of the orchestra have been playing these arrangements for the last 20 years and have also played the string trio version.

PAN M 360: How does it work to adapt a piano work for string orchestra?

NICOLAS ELLIS: We start with the idea that the counterpoint and harmony of this piece go far beyond a single instrument. An adaptation for orchestra can therefore shed a different light on the work. It should be remembered that the Goldberg Variations were arranged for a string trio by Dmitri Sitkovetski (1985) and this adaptation has been performed several times since. Based on this same idea, Bernard Labadie decided to make an arrangement for string orchestra. The arrangement was performed by Les Violons du Roy in 1999 and recorded in 2000.

PAN M 360: From trio to string orchestra, the order was considerable!  More precisely, what was the challenge?

NICOLAS ELLIS: First of all, it was to make the Goldberg Variations sound as if they had been written for string orchestra. When, for example, a variation offers two-note polyphony, Bernard can add extra notes to the arrangement to “pump up” the harmony. He can distribute the notes of this piece to the instruments in a way that brings out the harmony properly. If, for example, we start with 4 instruments and then all of a sudden it falls to two or three voices, we must create lines for the instruments that suddenly no longer play the original score but that must continue to play so that we understand that it is indeed an orchestral discourse. The ornaments of the score for the keyboard alone can also be transformed into arrangements.

But when you transpose this to strings, it’s not just a matter of adding an instrument during a measure to cover all the notes on the keyboard, but rather of finding a way to diversify the proposal from one variation to another in different configurations, whether with two musicians, three musicians, a string orchestra, etc.

The idea, in short, is that this adaptation for orchestra needs to be idiomatic, as if it were a concerto grosso with moments when the entire orchestra expresses itself and others when a limited number of instruments or soloists do so. A colossal work done by Bernard Labadie!

PAN M 360: Today, this transformation of classical works is uncommon. What is your perception?

NICOLAS ELLIS: It should be remembered that this was a widespread practice in the Baroque period, it happened frequently to Bach himself to transform a violin concerto into a concerto for keyboards, to take a suite for orchestra and make a duet, to take old movements of cantatas and integrate them into his St. Matthew Passion, or to quote other composers in his works. There was no such notion of intellectual property in his time, one could take music composed by others and interweave it into a different work. What Bernard Labadie did would not have seemed strange at all, in the baroque era.

NICOLAS ELLIS: Yes. Bernard has been able to change the arrangement slightly over time, and it’s really great what he’s been able to accomplish. It sounds like it was written for a string orchestra, it really sounds like a concerto grosso.

PAN M 360: What is the role of the maestro in this context?

NICOLAS ELLIS: My role is very pleasant at the time when my position as principal guest conductor of Les Violons du Roy is announced. It’s like my collaboration with Les Violons du Roy: an exchange. I humbly try to bring my grain of salt to what this orchestra does best. It is also an opportunity for me to welcome and better understand this tradition that has been built up over nearly 40 years. So my three-year term will begin in September 2023. This year already I am doing three different programs. Since my first collaboration in 2018, I have been lurking around Les Violons du Roy more and more!

PAN M 360: What was your knowledge of the work as a conductor?

NICOLAS ELLIS: This is the first time I’ve personally tackled the Goldberg Variations and it’s exciting to do it with Les Violons du Roy, experienced musicians who know the work well. These musicians remain very open and curious in the collective work to find their own interpretation of this piece.  This is the image of collaboration and exchange that we want to develop together, as the first guest conductor.

PAN M 360: How difficult is it for a conductor to direct such an adaptation?

NICOLAS ELLIS: Honestly, I would say that conducting the Goldberg Variations for orchestra is a joy because everything is already so well conceived! When you read the score, however, it’s intimidating to be in front of such a genius. One must remain humble! When you look at it, you understand why it was played so much. It’s a huge masterpiece of musical literature, and you have to get the whole picture, understand the journey behind it, and how to make each variation your own, so that they all have something to say. When you hear the aria at the end, you have to have this feeling of having lived a great journey.