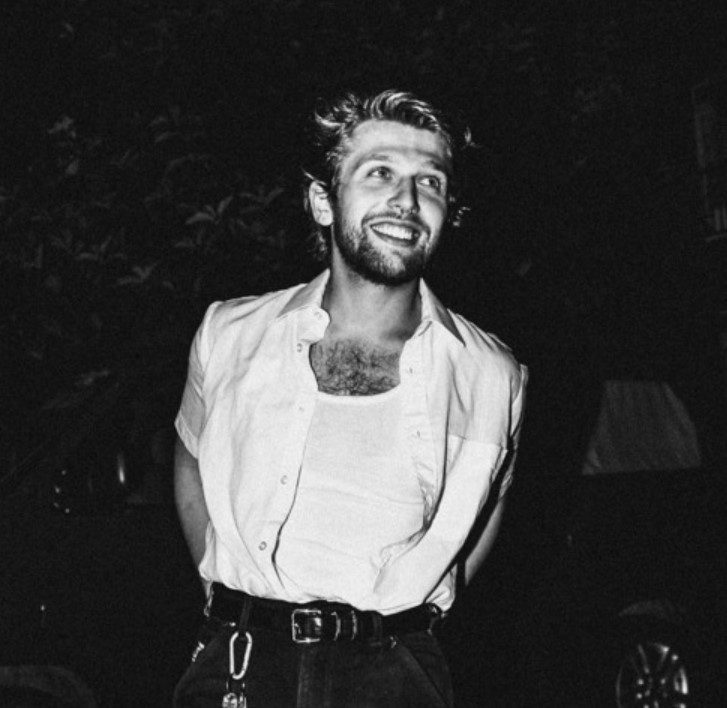 Since the beginning of his very young career, he has accumulated more than 35 million listens online, the apathy song being his most listened to song on the listening platforms.

But who is this guy, famous to some and unknown to others?

Born in Ottawa, Maxime Trippenbach, aka Maxime., recently moved to Montreal. At the age of 13, he was charmed by Deadmau5’s music during a car ride with his father.  “When I got home, I discovered that the Canadian DJ was using FL studio software. I immediately downloaded the software and learned how to use it,” he says.

The 24-year-old singer-songwriter and producer navigates between indie pop, bedroom pop, and indietronica. Last August, Maxime. launched Rubber Checks, a five-track EP. Through this project, he addresses the loneliness of a young artist. “I wrote most of my EP shortly after I moved to Montreal,” he says.

Maxime. wants to “create something different that draws listeners in from the first moments of his songs.”

At his POP Montreal show at the Diving Bell Social Club on Wednesday, Maxime. plans to play his most popular songs as well as a few unreleased tracks. “In concert, I like to modify my songs and offer a different version than the one available on online listening platforms. Otherwise, what’s the point of coming to my shows,” he says with a laugh.

On stage, he is accompanied by James Clayton on guitar and Lucas Kuhl on drums, two long-time friends.

Pan M 360 spoke with him to find out more about his music, his creative process, and his presence at Pop Montreal.

PAN M 360: How and why did you start making music?

MAXIME.: I started making music when I was 13 years old. When I was young, I took guitar lessons. My father always had compilations on CD in the player of the family car. One day he played a Deadmau5 song and I thought it was really good. When I got home, I discovered that the Canadian DJ was using FL studio software. Immediately, I downloaded the software and learned how to use it. When I was about 20 years old, I decided to leave electronic music behind, pick up my guitar and start singing. That’s when the musical universe of Maxime. started.

PAN M 360: What are your musical influences?

MAXIME.: I grew up listening to a lot of electronic music, from Cage the Elephant to Radiohead. Today, I listen to mostly alternative and indie music. When I create, I incorporate elements of EDM, because I still produce on the same software since my childhood. All my drums are electronic, I modify my voice a lot and use a lot of synthesizers.

PAN M 360: What is your creative vision?

MAXIME.: I want to create something different that attracts the listeners from the first moments of my songs. Also, I want my music to be a real earworm. Melodies are very important to me and I like when my music is close to pop. Also, I like to make unpredictable songs.

PAN M 360: You recently released your EP Rubber Checks. Tell us about the creation of this project?

MAXIME.: I wrote most of my EP shortly after I moved to Montreal. I didn’t know many people and I didn’t go out much. I stayed in my room a lot and wrote songs. I write about my life and my moods at that time. My lyrics are vague to let my listeners interpret them in their own way.

PAN M 360: You are performing on Wednesday at the POP Montreal festival. What does this experience mean to you?

MAXIME.: I didn’t expect to be accepted to be part of the festival, I just started doing shows. In fact, my performance at Pop Montreal will be my fourth ever. On stage, I am accompanied by Clay (guitar) and Lucas (drums). They are two of my friends and we have a lot of fun playing together. What I like about Pop Montreal is that the different events are not all in the same place. There are a lot of artists to discover. Also, I love Montreal so it’s a good excuse to be there!

MAXIME.: So far, I’m having a lot of fun. However, I’m starting to understand how difficult it is from a technical point of view to do a show without pitfalls. I recently did a show in Montreal and the power went out halfway through my last song. I wasn’t sure what to do, it was a very strange ending. I hope everything will be fine on Wednesday.

PAN M 360: What should we expect from you on Wednesday night?

MAXIME.: I’m going to play my most popular songs and some new ones. When I play live, I like to change my songs and offer a different version than the one available on online listening platforms. Otherwise, what’s the point of coming to my shows?

MAXIME. PERFORMS THIS WEDNESDAY, 9 PM IN A PROGRAM PRESENTED AT THE DIVING BELL SOCIAL CLUB, AS PART OF POP MONTREAL. INFO AND TICKETS HERE!