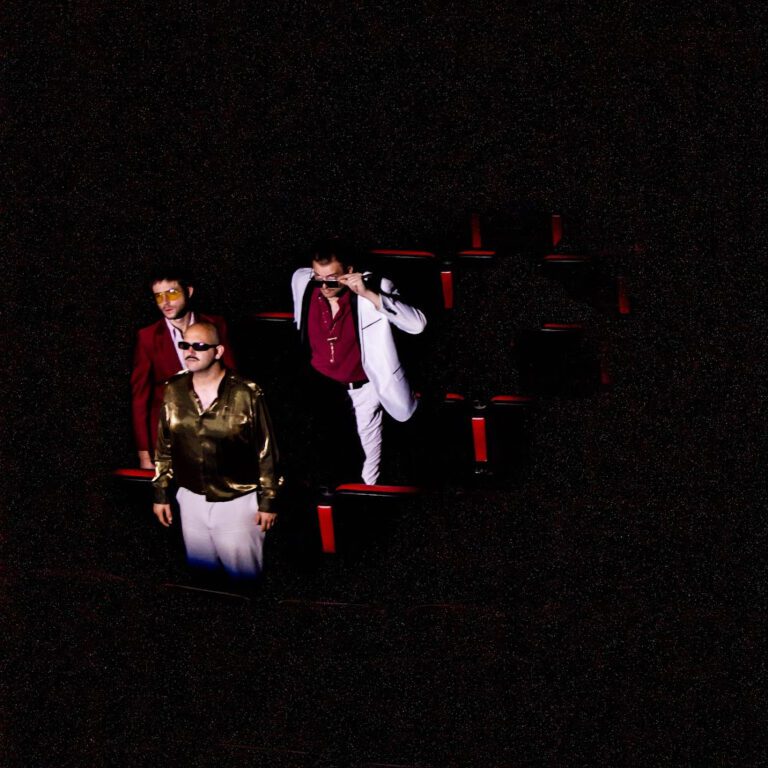 What do Hell, a Hollywood dog named Mooch, and post-punk/ no-wave madness all have in common? Give up? They are all subjects on Celebrity Death Slot Machine’s debut EP, Hell Stairs. This band is from Atlanta, but on the local Mothland label, and made up of former and current members of Rose Hotel, Neighbor Lady, Material Girls, and Mothers. From the concrete skies, and an isolating synthy wilderness emerges CDSM in all its glory. They have a sound for mayhem, up there with Bauhaus, Iceage, Viagra Boys, or The Birthday Party, made up of a rag-tag group of talented musicians who find pleasure in pushing sonic language as far as it will go.

CDSM’s Hell Stairs is dark and twisted, the perfect album to scare your family with and then subsequently burn down a disco too. The group is playing their first Montreal show on May 7 at Théâtre Plaza during the festival, Distortion’s, Theatre Takeover three-day series, featuring Deerhoof, Fleece, Paul Jacobs—replacing Spaceface due to COVID—and more. CDSM will open for the UK’s psychedelic post-punk duo, The KVB. We caught up with CDSM ahead of their show.

PAN M 360: How did CDSM start and how did you land on the name Celebrity Death Slot Machine

CDSM: CDSM started after a long summer spent crafting walls of unintelligible noise in a room full of synthesizers. These songs were pulled from that abyss and formed the identity of Celebrity Death Slot Machine. The name is an amalgamation of a handful of names we had going around but seeing as we write all the songs as a three-piece and Celebrity Deaths come in threes … we felt it was an apt name for the project.

PAN M 360: Were the songs on Hell Stairs derived from jams or did someone bring almost-finished songs first?

CDSM: The songs were all crafted by Ben, Tyler, and myself, and then our synth player and percussionist Jack Blauvelt produced and engineered the songs. Jack really brought everything to life.

PAN M 360: How did the theme of Hell Stairs arrive? Is it someone’s loose journey into Hell?

CDSM: The name of the record and maybe the overarching theme of Hell Stairs is ascension. As the pandemic took our jobs and our last musical project imploded, there were moments that felt like the bottom. The only thing to do from there is pick yourself up and climb back out of the shit. Look back into the eyes of the haters and say “Fuck Off.”

PAN M 360: The lyrics on Hell Stairs feel very stream of consciousness or are they actually meticulously crafted? (I get a huge Nick Cave/Bauhaus vibe)

CDSM: The lyrics were sometimes written from a stream of consciousness, but were crafted more as the songs took on a life of their own. We were very inspired by the classic movie Mooch Goes to Hollywood.

PAN M 360: You haven’t been a band for too long, yet you’ve opened for Iceage, and at the upcoming Distortion takeover series, The KVB. Are you just getting lucky, or do you know something most don’t?

CDSM: It is nice to be recognized by other talented and successful artists and we’ve already gotten to share stages with some extremely fine talent, but all of us have been writing and performing in other outfits together and adjacently for many years, so we can walk the walk at this point. Our live show and our recorded songs speak for themselves. We have worked very very hard for the cherished opportunities we’ve had and will have to play with talented artists.

PAN M 360: How do the songs translate to a live setting?

CDSM: You will have to see for yourself! We are working on the follow-up to Hell Stairs currently and hope to be teasing new songs from it on this tour and other dates this fall.