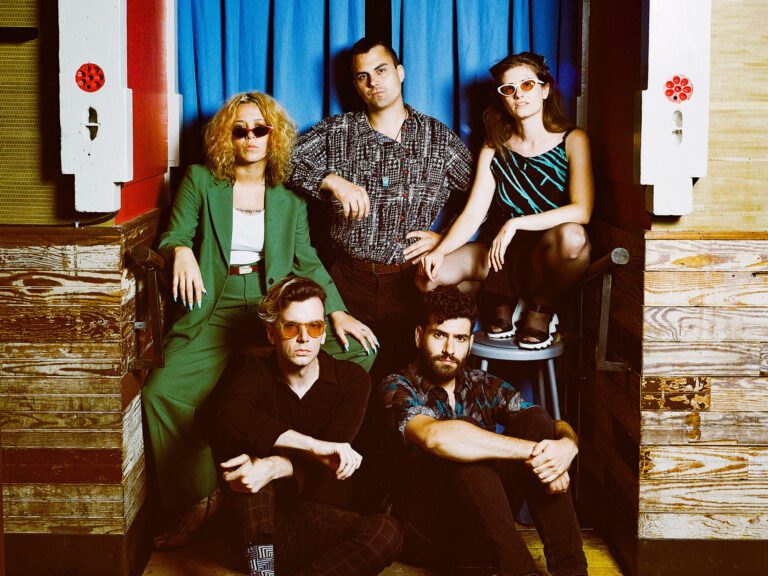 After a barely noticed appearance at Casa Del Popolo a few years ago, Bodega is coming this time to perform a few songs from their latest album, Broken Equipment, as well as the brand new EP XTRA EQUIPMENT and several other songs from their repertoire. The Brooklyn-based art-(post)-punk band has also seen three of its members leave the ship since the start of the pandemic. This will be the occasion to discover the new version of Bodega and its groovier sound.

PAN M 360 caught up with one of the new members, bassist Adam See, who talked to us about all the personnel changes and what they entail, his job as a philosophy teacher… and Heidegger.

PAN M 360: There has been a pretty considerable change of musicians in the band since the previous album Endless Scroll, released in 2018. First percussionist Montana Simone, who left shortly after the record’s release and was replaced by Tai Lee, then guitarist Madison Velding-VanDam and bassist Heather Elle. What happened, and how were you recruited?

Adam See: About the time the pandemic started, Madison and Heather left the band to start another project, the band Wants. Madison is still very much involved in that project but Heather has since left and started her own band, Flossing. I’ve been friends with Ben (Hozie, aka Bodega Ben, guitar, vocals) and Nikki (Belfiglio, aka Nik E Iki, vocals, percussion) for a while, our bands have shared the same stage a few times since 2017. So, around that time, Ben, Tai Lee (percussion) and I had a book club and since I played bass, they quickly recruited me. As for Dan Ryan, he was already a guitarist for the band on tour, so he was the natural person to call on when Madison left. It all happened pretty much at the same time. And since the beginning of this tour, we have had a new percussionist. His name is Adam Shumski and he replaces Tai Lee who had to leave to pursue a musical project for Netflix. I don’t really know much about it but it sounds pretty cool.

PAN M 360: Would you say that this new version of Bodega has changed the sound and dynamics of the band?

Adam See: That’s a good question… I think if you asked other band members you’d get a different answer. As far as I’m concerned, my style of playing bass is quite different from Heather’s. For one thing, we don’t play on the same bass as Heather. First of all, we don’t play the same brand of bass and Heather is more subdued, her tones are softer than mine, less raging. I think I’m a funkier bass player than Heather, my previous band (Otro Lado) was more danceable. But there’s also the direction Ben and Nikki chose to take the band; no matter who played on our last album, the sound and style would still be what it is. But having said that, I’m quite happy with my bass sound on this record. Of course, the work of guitarist Dan Ryan must also be mentioned. His playing is quite different from Madison’s. Madison’s playing is quite incisive and angular. Dan is more technically proficient, and funkier, in my opinion. He’s more creative too.

PAN M 360: And on stage, compared to the old line-up, what has changed?

Adam See: Having seen Bodega live a few times, I would say that the band is more groovy. Ben, Nikki and Tai Lee were commenting on our recent European tour that the audience was dancing more at our shows. I’m not saying that people didn’t participate before, but with this new line-up, we’re stretching out the songs, giving them a little more of a driving feel. We are more rhythm oriented, it’s more aggressive and funky.

PAN M 360: Are you playing the new album mostly on this tour?

Adam See: No, not really. We’re playing a lot of everything, even songs from Bodega Bay, Ben and Nikki’s old band. We have about 50 songs and Ben always picks different ones for each show.

PAN M 360: How do you reconcile your job as a teacher and your life as a musician on the road?

Adam See: That’s another good question. I had to quit my job before going on this long tour in Europe… and I got it back anyway! But during this tour, I’m still teaching my Environmental Ethics class at the New Jersey Institute Of Technology when I’m on the road, and I have to say it’s pretty demanding. In the band, they call me “the teacher.”

PAN M 360: Tell us a little bit about this book club you created with part of the band. What is it about? Did it influence the lyrics to a certain extent?

Adam See: Ben is pretty insistent on this, and he’s not entirely wrong. The title of the record, Broken Equipment, comes from the early work of Martin Heidegger, which we, of course, read in our little book club. We started this club a little after I got my PhD in philosophy. I had lost the taste for philosophy after a decade of being immersed in it. Then it became a job for me and I no longer saw philosophy as a source of pleasure. Ben had also taken philosophy classes and we decided to start a philosophy reading club. So Ben and I got together with a rapper friend from Brooklyn, another friend who was an ancient Greek and Roman scholar, and Tai Lee. During the pandemic, our little get-togethers quickly became our favorite time of the week, and it was during this time that Ben began writing some of the songs that appear on Broken Equipment. One of these songs, “Art And Advertising,” didn’t make it onto the album, but was instead released on the XTRA EQUIPMENT EP (released on July 15th). This track includes the words ‘broken equipment,’ which became the title of the album. The song “Thrown,” which starts the Broken Equipment album, is a direct allusion to the work of Martin Heidegger. So yes, there’s a bit of philosophy in our recent albums.