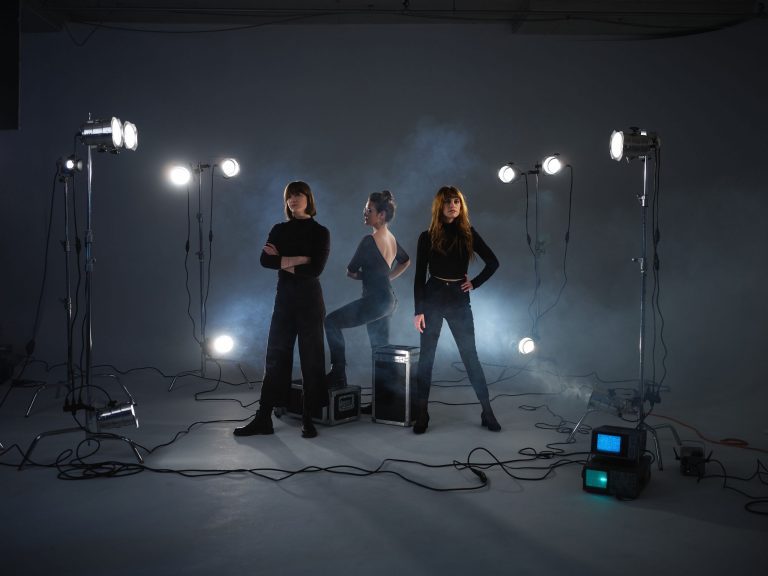 BEATS at MUTEK: Two SATurnalian Nights in Search of the Virtual Heart

For more than twenty years, the digital revolution has not ceased to make our environment evolve at a frantic pace and this is more and more out of step with our natural biological rhythms. Unknown to us, this new virtual extension can in return slow down the development of a more vital, more buried, more instinctive and more vibrant aspect of ourselves. In the not too distant future, this artificial evolution, now out of control, may force us dangerously into its own downfall, or conversely, show us how to refocus on the path to truth.

With the pandemic, the feelings of over-connection and relentless acceleration have been amplified and even turned into universal feelings. Presented on August 24 and 25 in preview at the SAT as part of the 22nd edition of the MUTEK festival, the new Montreal collective BEATS attempts to transform this global phenomenon into a transdisciplinary scenic experience. Combining contemporary dance, visual projections and sound creations, the performance retraces the path of the human being caught in this dizzying whirlwind of technology in search of his hidden eternal essence.

Equipped with a stethoscope and a self-contained light stick connected to the sound and visual compositions, the three performers Yuki Berthiaume, Hamie Robitaille and Molly Siboulet-Ryan each communicate their art through a choreography conceived by Stéfania Skoryna and form a whole with the help of custom-made devices designed by Ganesh Baron Aloir. PAN M 360 met with the team behind the ambitious multidisciplinary, technological and immersive BEATS project.

PAN M 360: The project was publicly launched on March 8 during the pandemic. How did this project start? What triggered it?

Hamie Robitaille: Our meeting was quite the trigger. It started with a desire to do a show with Yuki that would mix dance, music and visual elements. We quickly realized that we needed more help with the choreography. That’s when Stefania joined us to do the project. We wanted to make the creation feminine I think and to bring the subject of the incessant work, the daily life, the pressure of performance. We wanted to do this all three of us even if we were very busy.

Stefania Skoryna : I entered the project when there was already a first version of ten minutes. I asked Molly Siboulet-Ryan to participate, I found it easier to be outside to see the choreography than to be inside.

PAN M 360: For the staging, we can see in the video a slightly retro soviet set. Why this choice?

Stefania Skoryna: It came by itself. We are in the work, in a task, the chosen costume is China and the music is very mechanical.

Hamie Robitaille: As for the scenography, we knew that we were going to go towards something techno and industrial. When we talk about industrial, the codes are the line work, the barrels, the mechanical look. That’s probably where the Soviet side comes from.

PAN M 360: Yuki, you are in charge of the sound composition of the project. You have a foot in the garage rock scene (I.D.A.L.G., Jesuslesfilles), still rather analog, how do you feel about this transition to digital via the BEATS project?

Yuki Berthiaume: I did a year in electroacoustics, but it’s my only experience in this field. In the bands I play for, I always compose my part on the synth. But I had never really composed a whole piece of music, it was really new. I did it, but I don’t really know how (laughs). I managed to compose 40 minutes of material. I tried a lot of things, it was really experimenting, I don’t master the technology I use. But I thought it was interesting to have a bit of a punk approach, more intuitive. I don’t master Ableton but it doesn’t matter, I did it the same way, it was bound to give something. I learned from that, not to do like everyone else or not to master the instrument. It even becomes a strength.

PAN M 360: Your project is presented during the MUTEK festival at the Satosphere. How is the 360º experience going?

Hamie Robitaille: For MUTEK, we were offered a difficult choice: either Place des Arts or the SAT dome (laughs). Since we had already had the chance to present a rather frontal and classic show as part of Code d’Accès, we thought we could bring it to the SAT dome at 360º. Since the visuals are quite compelling, the immersion was relevant to the subject of the show. Feeling overwhelmed by the visuals around us helps to amplify the subject of the piece. It was a nice challenge. Eventually, we would like to be able to do it completely 360º. It’s a bit of a hybrid, the show remains frontal.

PAN M 360: You talk about a sense of time accelerating. One of your goals is to transform this universal feeling into a stage experience. What gives you this feeling of constant acceleration? Who do you think accelerates, the human or the technology?

Hamie Robitaille: It’s really the chicken or the egg. One of the first reflexes is to say that it’s technology. From my side, I’m not sure. Technology was developed to serve a human need, a need for adrenaline, to go faster, to be more efficient. Humans have created technology but in the end, we have lost control. Technology is the element that exacerbates all this. We saw it with the pandemic, we were extremely connected and it amplified this feeling. In the end, this need for adrenaline is human and the ability to do tasks over and over again is more the role of the machine.

Stefania Skoryna: For example, I don’t have internet data on my cell phone but I feel that there are things that go faster than me. Do we have to accept this? I take the choice to push it back. I remember to use it as a tool.

PAN M 360: You use a connected stethoscope to transform heartbeats into sounds and images. In concrete terms, how are heartbeats transformed into digital material?

Hamie Robitaille: The stethoscope was made with the help of Ganesh and Youtube (laughs). It’s a little tie microphone that is plugged into the stethoscope and that allows us to hear the heart. The sound is passed into Ableton and filtered. This heartbeat can make the visuals react in real time, it’s really a creative tool.

PAN M 360: The line between the organic world and the digital world is becoming more and more blurred, not only in relation to new technologies, but also in our daily experience. Can we say that you try to find life through the machine?

Hamie Robitaille: We don’t try to give a soul to the machine, we try to find humanity in all this whirlwind of technology. Molly embodies the human in the play.

Molly Siboulet-Rya: It’s more of a reunion than a transformation. In the show, the human has lost a part of himself and finds it again through a journey.

Yuki Berthiaume: It is also to illustrate that when we push ourselves to the limit, the body lets go.

Stefania Skoryna: The goal is to regain control before reaching that point, to take a breath.

Ganesh Baron Aloir : The stick is bidirectional, we can send it commands to change the type of ignition it will have. Conversely, we have information on its angle, its rotation, the speed of its movement that we can attribute to different visual or audio effects.

Hamie Robitaille: For the show, since it is still a prototype, we are concentrating on the movements of the stick that make the visuals react and on the audio that makes the light in the stick react. But eventually, if we get funding, we’d like to refine it and make it available to other creators. It could even react to the weather, the air pressure. The possibilities are really endless. In the future, we will continue the research. We are working on the new prototype, it is now two meters long. It has 220 LEDs, a micro controller and four batteries to power it. Ganesh is super good with technology but he had never made a 100% connected object. He had to learn how to 3D print and program in obscure languages (laughs).

PAN M 360: The stick kind of has its own life in the middle of the show. Why did you decide to give it its own autonomy?

Hamie Robitaille: That’s a good question. We had been toying with the idea of this glow stick for a long time but we didn’t really know what it meant. It slowly turned into a question: what drives us in the end? It’s a little bit the soul in the show, something immaterial. It is a stick that lights up, that reacts, that is sensitive. It’s not always lit up as much from one part of the piece to another. At some point, I think we all put our souls aside to work. In the show, other people sometimes control the stick, manipulate it. In the end, we want to find that soul. That’s why it has its own life in the show. It was important for us to have a slightly different and majestic object.

Yuki Berthiaume: It’s like its self, its essence, its light. It’s the sense of the sacred.