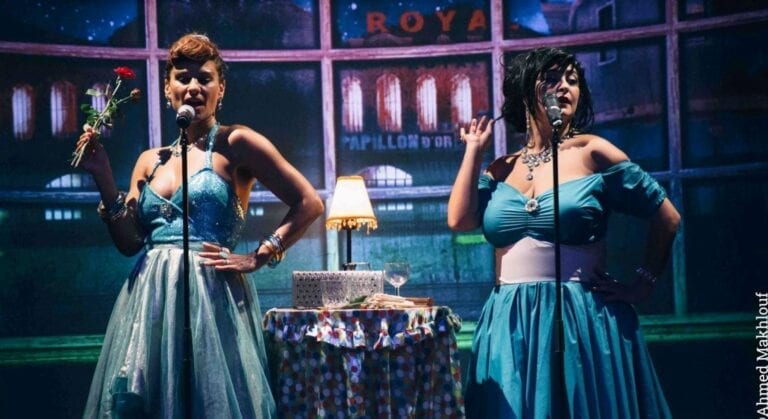 Bar Farouk: Half a century of Beirut nightlife… before it all fell apart

Bar Farouk sums up the nightlife of Beirut, from the ’20s to the ’70s… before the sky fell on the heads of the Lebanese.

Bar Farouk is a colourful, multidisciplinary show presented at the Metro Al Madina space in the Hamra district of Beirut. Its audiovisual version is broadcast as part of Montreal’s Festival du Monde Arabe, allowing a virtual plunge into downtown Beirut, the hard-hit capital of 2020. A crucial artist in this show is singer Yasmina Fayed, who connected with PAN M 360 from Lebanon.

PAN M 360: Tell us about the genesis of your show, which is about the nightlife of Beirut before the civil war.

Yasmina Fayed: Seven years ago, Metro created a new show called Hishik Bishik. We tried to assemble the “greatest hits” of the golden era in Egypt, songs that were loved by the whole Arab world, along with a certain story to link these songs together. As the two-hour show progresses, the songs do too, chronologically, meaning that during our research, we tried to choose songs that were the hits of the years between the 1920s and the 1970s. The show was a success, and it’s still running for the seventh year. Hicham Jaber, the director of the show, thought it was inevitable to give the same salute to the songwriters and artists of Lebanon, so Bar Farouk, with the same group of actors and musicians, was created.

YF: Beirut has always been a vibrant city, witnessing the arrival of artists and intellectuals from all over the Arab world.The name Bar Farouk was inspired by Theatre Farouk, which actually existed in the old Beirut, downtown. The theatre presented various shows, and the most promising artists from Egypt and Syria gathered there to discuss art and give performances. As the years went by, and war was looming in the air, la decadence was mirrored in the grand theatre’s performances. Pioneers were replaced by amateurs.

The director tried again to copy the images and colours of the city. Progressing again from the ’20s to the year 1975, when the Lebanese civil war started. The audience is transported in time, through the songs, melodies, and costumes. The show takes place in the famous theatre, and with each song, the characters of the show are revealed, introducing the femmes fatales of the cabaret, along with the usual band, the romantic singer, the comic duo, and the abaday, meaning the strong fellow that everyone fears, the Robin Hood of the Beiruti streets (every street in Beirut had its own abaday). The visuals playing in the background are essential because they play the role of the sand clock, that gives the audience an indicator of time passing by.

YF: Ziad al Ahmadiya is in charge of the musical arrangements in both Hishik Bishik and Bar Farouk. Musically, some of the original songs were performed at the Lebanese radio station, so they had an orchestra playing with the singer. In Bar Farouk, Ziad tried to preserve the spirit of the different eras presented through his arrangements.

PAN M 360: Who are the main soloists, singers, and musicians?

PAN M 360: How has the show evolved? What changes have been made over time?

YF: Each member of the band did their own research about the character he or she was playing. A lot of one-on-one meetings were held with the director, and we discussed costumes, and the characters’ attitudes. The show is not just about singing; every person on stage represents a certain character that the Lebanese audience relates to. As time went by, the characters we were playing were continuously developing, and asides began to be heard, revealing each of the characters’ own world. For example, you could hear a dispute between the “girls”, or advances from one of the male characters to one of the girls in the cabaret. It’s as if we’ve always known what the show is about, and with time, it all fell into the right place.

PAN M 360: Is this show a source of nostalgia for the Lebanese who lived through the great years of modern Beirut?

YF: Indeed it is! The audience is transported through time with every song, and every tune. The songs were carefully selected to create that impact. You’ll see someone in the audience smiling, or rushing to whisper in someone else’s ear that he remembers this song. Nostalgia is the main driver of the show, we revived a lot of musicians and performers that only few knew about, and brought to light some of the greatest artists that were forgotten, intentionally or unintentionally, over time. I guess that’s why the show turned out to be a hit.

YF: When Metro opened its doors eight years ago, the younger audience were seen flocking to see the shows and get a glimpse of what was happening in the capital. They were, and still are, curious. They want to see what’s new, they want to see new shows. So when the idea came to revisit a bygone era, the younger audience manifested love and appreciation, and you could see them coming again to see the show twice or more, inviting their parents and friends.

PAN M 360: Do you see an international potential for the presentation of this show? How do you think it could reach audiences around the world?

YF: I consider the audience to be my own “guests”. They are visiting us to see us dance and sing, and they sing along and dance too. Many people from different nationalities have come to see Bar Farouk, and their reaction was as overwhelming as any other Lebanese or Arab. So I think that taking part in this celebration is very important. People will be reintroduced to the forgotten face of Lebanon – the Lebanon that had la joie de vivre!

PAN M 360: How did you adapt Bar Farouk as an audiovisual production?

YF: For us on stage, we tried to perform as if we had a full house. We had the cameras to look at, keeping in mind that a big audience will be watching behind those lenses. What the cameras were trying to catch was the little details that are happening in the corners of the stage; they tried to capture every move of every character so that the people watching online could get into the mood, as if they were seated inside the theatre.

PAN M 360: Can you tell us the history of your troupe, of your artistic direction?

YF: We have always been friends, all of us, really. We knew each other by name, or because we’ve had some work in common during our time at university. When Metro decided to produce Hishik Bishik, everything fell into its right place, as if we were meant to come together. And here we are, still performing both shows.

PAN M 360: Recent events in Beirut have been very difficult, and come on top of the hardships experienced by the Lebanese. What’s your state of mind?

YF: I think I speak on behalf of a lot of us when I say we are tired. We are depressed. During the first days of the revolution, someone had written that the Lebanese people are the happiest depressed people you’ll ever meet, and that is very true. We know the situation we are in, and we are trying to make the best of it. We’ve decided to move on. I am writing to you now, thinking about the deteriorating economic and political situation, about the people who have lost their homes after the 4th of August port explosion, and about rain. It’s raining in Beirut and so many people haven’t had the proper help needed to restore their houses. They know they won’t get the help needed from the government. I think about our performances, about joy, songs and dancing, depression, lockdown, bankruptcies… I think these are great topics for a new show! We have to move on. We need to move on.

PAN M 360: There was a lot of vigour for protest among Beirut’s young people before the explosion, some now speak of gloom and discouragement… what do you think?

YF: Lebanon has always had its ups and downs, but the young ones have always managed to pick up the pieces and carry on. Youth from all over the Arab world have come to Beirut to experience freedom of speech and get a taste of art and fantasy. I am afraid that this time it’s different. We tried to raise our voice, it was unheard. We tried to carry on, and thought that through hard work we will have it our way, and then came the explosion.

PAN M 360: What are your plans for the future? Stay in Hamra? Move? Work for the cultural reconstruction of Beirut?

YF: Being Lebanese is hard nowadays. As I said earlier, we are tired… constantly worried. Thinking about what’s to come, knowing that we have only ourselves to count on. I cannot leave Lebanon or Beirut, though I dream of peace of mind! But this is where we belong. We have learned how to zigzag through it all. Build our small world, through performing arts or small businesses. This is what it’s all about, isn’t it? Surviving through it all, while keeping your head above water.