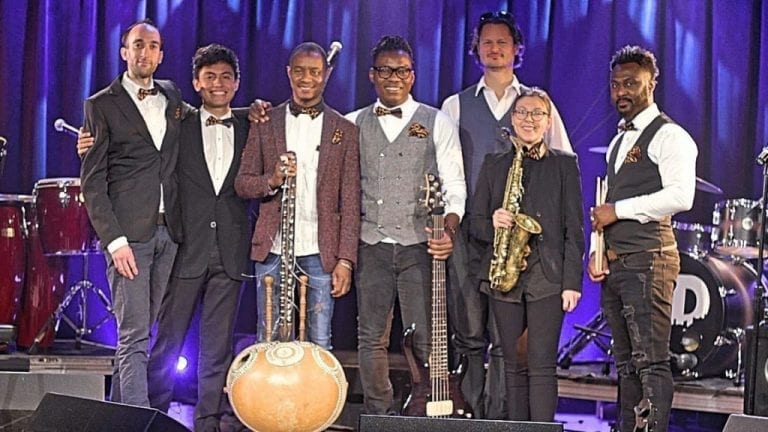 First of all, let’s immediately settle any possible uncertainties about the conductor and director of this project. Is the anecdote about the stage name true?

“My first name is Justin, and we chose Juste-1 (juste un) as the name of my previous band,” explains the singer and bassist of Bantü Salsa, naturally. “We pronounced this anagram according to French phonetics, to show our unity, in all simplicity. But the presenter of our first TV appearance, an English-speaking man, read the number 1 as one (in his language) when he called us up on stage. The audience immediately swallowed it as a brilliant idea and, tired of correcting the fans every time, we bowed to the will of the public, even adding a circumflex accent on the â to deliberately exaggerate the English pronunciation.”

A native of Cameroon, Just Wôan arrived in Quebec to participate in the Francofolies de Montréal. He eventually founded a family and set up a promotional initiative for hybrid artists, including a recording studio, video specialists, a label, and a publicity team: Les productions Miss-Meuré.

“In my mother’s language it means ‘eyes and ears’. For me, it simply symbolises multimedia. We’ve already signed a dozen artists. I’ve worked with the Arts Council on models, and as a director for award-winning and subsidised projects. Too many worthy artists remain on the sidelines, and can’t find their place. There is a lot of work to be done!”

The launch date of Bantü Salsa’s debut album fell in the same week as the restrictions imposed by Covid-19 in March. There’s now only one solution: roll up your sleeves and follow the calendar.

The United Nations of Quebec and the kora

If it’s true that there is a real alternative music scene here that strongly reflects Montreal’s unique demographic diversity, then the new band led by Justin Itoko (alias Just Wôan) can be placed at the top of the list, with eight different nationalities represented. It has a full brass section, Mexican pianist Ricardo Angel Soniaro (schooled in Cuba in the big leagues), African drummer Ronald Auguste Dogbo, and, to top it all off, the authentic Malian griot Diely Mori Tounkara, who happily ensures the inclusion of the 22 magic strings of this age-old Mandinka harp.

“If the kora in salsa is not an absolute exception, or a unique case, it’s indeed the first time that it takes up so much space, to my knowledge, in Afro-Latin orchestration at least,” says the leader.

Very eloquent when he evokes the evolution of the Bantu people, their history during centuries of slavery, their migration from sub-Saharan Africa to Angola, the songwriter of this Quebec salsa group offers up lively, sunny songs in which the beauties of the dark continent are also celebrated. And on “Kessaï”, the title song of this first album, we hear about living together everywhere, the right, the legitimacy for everyone to feel good anywhere, in any country, without having to suffer from local prejudices and systemic racism.

In an attempt to define the musical style of Bantü Salsa in the columns of PAN M 360, a few weeks ago I did not hesitate to quote models such as Richard Bona or Bobby McFerrin to describe the maestro’s singing. Does his pride still pass through the door after these compliments?

(He stifles an embarrassed laugh.)

“On the contrary! Being compared to such accomplished artists necessarily gives you more humility. And it can’t make your ankles swell, as they say, or give you a big head. It makes you humble before the talent of these musicians, who have immense careers. We’re talking about McFerrin, who can fill an entire stadium by himself with just one microphone, or Bona, who excels at everything he touches. I’m 37 years old and I still have all the work to do. It’s all in front of me.”

Nuits d’Afrique offers the third musical journey in its series Live from Montreal’s African Nights with Bantü Salsa and Ayrad, this Thursday, October 22 at 8 p.m. SEE THE LIVESTREAM