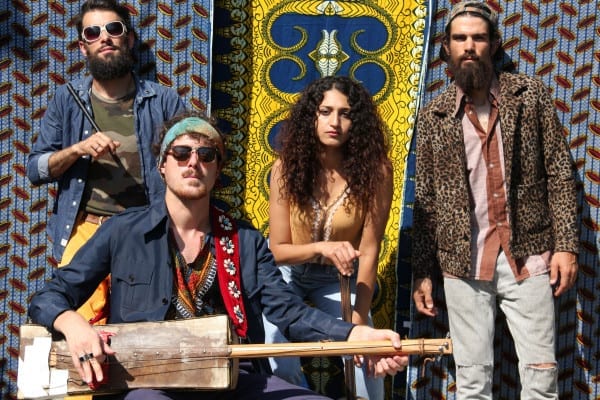 From Marrakech and Lyon, Bab L’Bluz brew an infectious mix of Saharan blues, rock, and psychedelia. No vaccine for this one!

Everywhere in the Saharan and sub-Saharan zones of Africa, the original blues generates updated expressions, adapted to a shared global culture. Since Nass El Ghiwane and Hasna el Becharia pioneered the approach in the 1970s, many artists have adapted the rich heritage of Gnawi, Tuareg, Amazigh, and Berber cultures. At the turn of the century, Tinariwen became a group of international renown, followed by Bombino, Terakaft, Etran Finatawa, Gnawa Diffusion, and Hindi Zahra, to name but a few artists living in North Africa or the West. Now it’s the turn of the Franco-Moroccan group Bab L’Bluz to make their mark. As they geared up for Mundial Montréal, Yousra Mansour and Brice Bottin, founding members of the noteworthy quartet, answered questions from PAN M 360.

PAN M 360: What is your angle of attack? What sets you apart from your predecessors and contemporaries?

Yousra Mansour and Brice Bottin: We think our strong point is that we play music with many influences, different but, to us, similar, from psychedelic rock to chaâbi, or from hassani to gnawa. We aim to bring people together positively and get heads nodding in the various audiences we meet, wherever we go. That’s what our songs are about, love, peace, and respect. We also believe that what distinguishes us from our predecessors, who are highly respected, is that we don’t see ourselves as a fusion band, but rather as a rock band based on the concept of the power trio à la Jimi Hendrix, with guembri and awisha instead of bass and guitar, with an extra flute, and with a female leader.

PAN M 360: What were the models for your own musical identity?

YM & BB: We two, the founders of the group and creators of the Bab L’ Bluz repertoire, had the chance to grow up in families open to musical diversity. For Brice, it was more rock, Afrobeat, Peruvian, and Brazilian music that he listened to at home, as for Yousra, she considers herself lucky to have had parents who loved blues, soul, funk, rock, pop, classical oriental music, and the traditional and current Moroccan music of their time. It is certainly this diversity and openness to other musical cultures, in addition to the emergence of the internet (introducing other music such as R&B and hip-hop) that has allowed us to be the people we are today and has forged our individual intercultural identities, something that has had a positive impact on our musical creativity.

PAN M 360: There are still very few North African bands with frontwoman in the foreground – yes, there’s Hindi Zahara, Emel Mathlouthi, Djazia Satour, Flèche Love and so on. How do you think this role, which is perfectly fulfilled by your singer, is perceived in your opinion?

YM & BB: We think that the role of frontwoman is seen positively and encourages women to have more self-confidence and to persevere in what they undertake. This role also encourages them to challenge the patriarchal system that is pervasive in some societies. In our case, we take this very naturally; it’s a richness to have a woman leading the group, it inspires both men and women.

PAN M 360: You use modernised versions of guembri and awicha to replace the bass and guitar of rock bands, how did you develop the playing of these instruments? How do you envisage this?

YM & BB: The guembri is a very complete instrument in terms of its harmonic and rhythmic power, and has a vast traditional repertoire. Nevertheless, as we are also trained guitarists, we incorporate different playing techniques from other styles, or scales that are not often played in the repertoire of gnawa music. We welcome the constraints of the instrument as a richness and we still mix this instrument, which has been travelling for hundreds of years, with current music tinged with rock and psychedelia.

PAN M 360: From a textural point of view, do you use effect pedals or synthetic sounds from synthesizers, samplers, oscillators, or other computer software?

YM & BB:Yes, indeed, we have guitar pedalboards adapted to electric guembris – overdrive, phaser, wah-wah, fuzz, reverb, etc. We also use a few layers of analog synths and karkabou loops which are played by the real-time sampler. We love the sound and all the  possibilities to travel it offers, we’re really interested in the sensations it provides.

PAN M 360: Where and how was your album Nayda! recorded and produced? Who are the people in charge of the production?

YM & BB: Our album was composed and written mainly in Marrakech by Brice and Yousra during the learning of traditional instruments, and before the creation of the complete Bab L’Bluz formation with Hafid and Jérôme. Nayda! was recorded in Lyon by Christian Hierro at Back To Mono Records, a studio specialised in analog and vintage sounds. The mixing was done by Christian Hierro and Brice Bottin. The latter is in charge of the packaging and the sound textures on our album.

PAN M 360: In more general terms, what do you think are the new chapters in the fusion of Maghreb heritage and rock culture? And electronic culture? Where do you fit into this?

YM & BB: We’re very positive about the young musicians who are coming up; many of them have the flame, the goals, and the overflowing creativity. We encourage them to develop their own style based on what they like. Many new chapters are possible on the fusion of the Maghreb heritage or elsewhere, with rock culture in particular. The best is yet to come, we hope! Besides, we were born in the culture of electronic, rock, and hip-hop, it’s also a richness that is part of us. The future of electronics is vintage electro from the ’70s, or not…

PAN M 360: The texts are sung in what language exactly?

YM & BB: The texts are sung in Darija, the Moroccan dialect which results from the succession of several peoples and civilisations in the Maghreb which mixed with the original local population (Berber). This led to a dialect with words mostly in Arabic, but also in Berber, Spanish, French, Portuguese… We also write in classical Arabic, as is the case for “Ila Mata”, or in English, for “Africa Manayo”.

PAN M 360: What’s your poetic approach? What are your favourite subjects?

YM & BB: We’re interested in all forms of poetry, especially Bedouin poetry, sung and sometimes accompanied by percussion or other instruments. On our album, there’s an influence of Mauritanian poetry called tebraa, which exists in other countries under different names, in appearance but not in language. Created by women in a patriarchal and conservative society where love was considered taboo, this poetry allowed women to enchant the world with their romantic verses sung for their lovers while remaining anonymous. A beautiful initiative to be able to contradict the system without directly opposing it. We’ll also mention the influence of Arabic and Persian poetry; on the one hand the wonders of Anis Shoshan, the young Tunisian poet, accompanied us during the writing of our lyrics, on the other hand the late Persian poet Jalāl ad-Dīn Rumi blessed us with his wisdom and purity, which has already accompanied us for several years in our daily life. We don’t set limits to the subjects of our texts, we speak of love in different forms: love of mother, lover, or neighbour, tolerance, anti-racism, Sufism. Moreover, we denounce slavery, the exploitation of precarious populations and lands still economically colonised, corruption, sexism, misogyny… We hope to live in a better world.

PAN M 360: Is the Bab L’Bluz line-up a mix? What are the origins of each member? Are they all from Marrakesh or are they all based in Morocco?

YM & BB: Yes, the Bab L’Bluz line-up is mixed, in a way. Yousra is from El Jadida in Morocco, she’s of Arab-Berber origin, Brice is from Annecy and he doesn’t know his origins, Hafid is from Lyon and of Tunisian origin, and Jérôme is Spanish. The group was created by Yousra and Brice in Marrakech and developed into a four-person group in Lyon. Before the lockdown, the two founders of the group lived between Lyon and Marrakech.

PAN M 360: In the current context where several regions of the Sahara are becoming zones conducive to ethnic strife and religious violence, do you see a commitment to your free and progressive music? Do you believe you have a role to play?

YM & BB: Indeed, music could play a fundamental role in the reintegration of peace in areas with a tendency towards conflict, especially over identity or religion. We must succeed in transmitting the idea and highlighting the fact that cultural difference has always brought richness, and that in today’s world all cultures are impregnated by the traces of other previous local cultures, or foreign cultures that ended up becoming local at some point by mixing with already existing cultures. As for the subject of religion, it’s enough to put forward the foundations of all religions, which have a lot in common, and thus transmit the values of peace, love, tolerance, benevolence, and respect through music. We fight an inner struggle every day to become better people, and believe that through the vibrations of music, we’ll end up touching the hearts of many.

PAN M 360: What are the next steps in your development? Do you have any new recording projects, remixes, collaborations?

YM & BB: To be able to play in as many places as possible, to share our first album live, then to compose and, why not, think about collaborations or remixes! If you have any ideas, don’t hesitate!

PAN M 360: For Mundial Montréal, what are you planning to play? Where will you be? How was the film set designed?

YM & BB: Unfortunately, there won’t be a film set for us in this edition, it will be in the form of an interview with a focus on our existing sounds, but we very much hope to see you live next year. Inch’Allah!