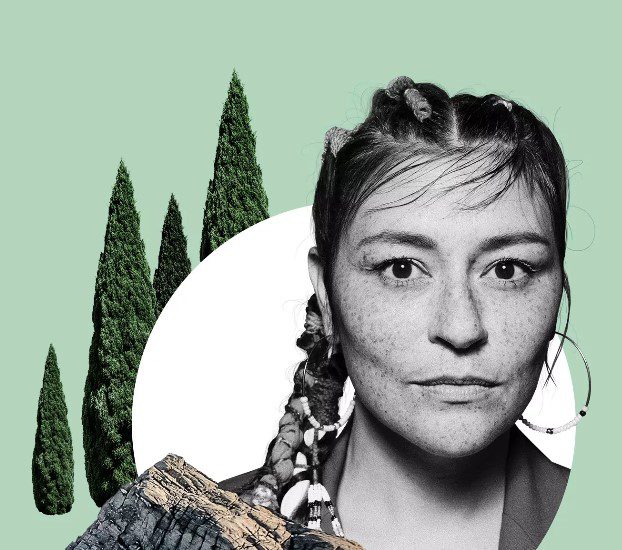 Aurores orchestrales : under the Nunavik sky with Elisapie & Orchestre Métropolitain

This Sunday afternoon at the Maison symphonique, the three-part symphonic version of Maurice Ravel’s ballet “Daphnis et Chloé” will be preceded by a dialogue between the orchestra and Inuit culture, embodied here by singer and percussionist Sylvia Cloutier as well as Elisapie, to whom the proposal was first made.

That’s why she lends herself to PAN M’s questions, a few days before fully experiencing these orchestral auroras with the OM and its audience.

ELISAPIE: It’s crazy! The desire of the Metropolitan Orchestra is there, to go and meet the diversity, the communities. I felt it during the first edition of the Grand Solstice in 2021, for the National Aboriginal Day on June 21. I was perhaps stubborn about wanting to have the Orchestre Métropolitain with us for a TV show that was not in Montreal. Finally we managed to get the OM to collaborate with Jeremy Dutcher, to create a meeting. I demanded that Yannick (Nézet-Séguin) be there, I bit like a symbolic meeting between conductors to make peace. In my opinion, the conductor had to come because it was to him that we asked for the invitation to our celebration. Then a small group from OM, about ten musicians, came to Jeremy Dutcher’s side, and it was a magical moment. Beyond that, Yannick had a problem with the customs because he had changed his date of entry into the country and the formalities of the COVID held him back. He was on the verge of tears when he had to face the facts, he felt so bad! So we had to present him in a video conference so that he could talk. He was very generous and his band was magical.

PAN M 360: Did the invitation to a concert of the OM follow or was it already planned?

ELISAPIE: There was already an interest of the OM to invite me, Yannick wanted to collaborate with me and also with other native artists, he deplored that we did not have enough space in the public space and he agreed on the necessity of a real work of exchanges. It wasn’t clear at the time, but around the holidays, I received the invitation. I was working on my new album at the time, I didn’t think I could do it and … I finally decided that everything could be done and that we would work on this invitation from OM in the spring. Great conversation starter!

PAN M 360: Is this sequence presented next Sunday with OM the result of a commissioned work?

ELISAPIE: I didn’t have a commission… I was just told that OM would like to open (this Sunday) their season in the period coinciding with the National Day of Truth and Reconciliation (September 30th). It was a real wish and they suggested a 20-minute carte blanche. I could do what I wanted and they would entrust me to François Vallières for the orchestra arrangements.

ELISAPIE: Obviously, I didn’t want to improvise this sequence, I wanted to create a mood to make people in the room shiver. So I opted for a mix of original music and songs from my culture of origin, starting with throat singing, drums from home, evocation of sounds from home… I wanted the audience to go on an adventure. And there is also my work, my proposals, my voice. So OM encouraged me to include two songs from my repertoire, this time in Inuktitut, without imposing anything – Qanniuguma, which is about the lightness and the crazy freedom of snowflakes, and Una another one more personal, more emotional, dedicated to my biological mother.

So this sequence will include songs from my repertoire linked with other sounds and symphonic arrangements to create a mood with François’ arrangements.

PAN M 360: So the idea of an adventure is important.

ELISAPIE: Yes, people have to feel in vast territories where there are not many humans, where the sounds are different, where people from the South are destabilized and moved by the real North and not by the North that we visit in an organized trip. The inspiration is to invite people from the South to the North. And it’s not just a little snow that falls gently. It can also be steep, tough, and you have to have faith in life (laughs).

ELISAPIE: Yeah, kind of. I don’t want to go into too much detail but the songs are part of the soundscape. Let’s imagine ourselves in the Great North, there is the extreme softness, the intimacy between humans, but also the hard side of life there. All of this is addressed and what lies beyond the songs brings us back to the purity of the people of the North, of who we are. We are also people who are prone to hypnotic behavior or trances. The ayaya for example, are very slow songs or tales that tell a story that puts us in a particular mood.

PAN M 360: Will you have other colleagues at your side?

ELISAPIE: Sylvia Cloutier will be there, on percussions and throat singing. She is originally from Kuujjuaq, Nunavik. We will also be able to count on a choir that lends itself very well to certain sequences of our creation. I don’t want people to understand the words in Inuktitut, but to feel the emotions and intentions. I think we have an amazing window!

PAN M 360: What will the orchestra be doing, roughly speaking, according to the arrangements of François Vallières and his colleague Jean-Sébastien Williams?

ELISAPIE: I asked to support the rhythm of the drums, all the evocations of nature, also the chaos.

PAN M 360: Will there be pre-recorded sounds? Sounds of nature for example?

ELISAPIE: No, everything is live. We are the nature! (laughs)

ELISAPIE: Not really in my perception. I don’t like to say at the center, I see myself more as an accompanist who comes with my songs, my voice and my emotions. I am not in the center but with the herd.

CHORUS: Senior Choir of the Vincent-d’Indy School of Music

FOR INFO AND TICKETS FOR THIS CONCERT OF THE OM, IT’S HERE