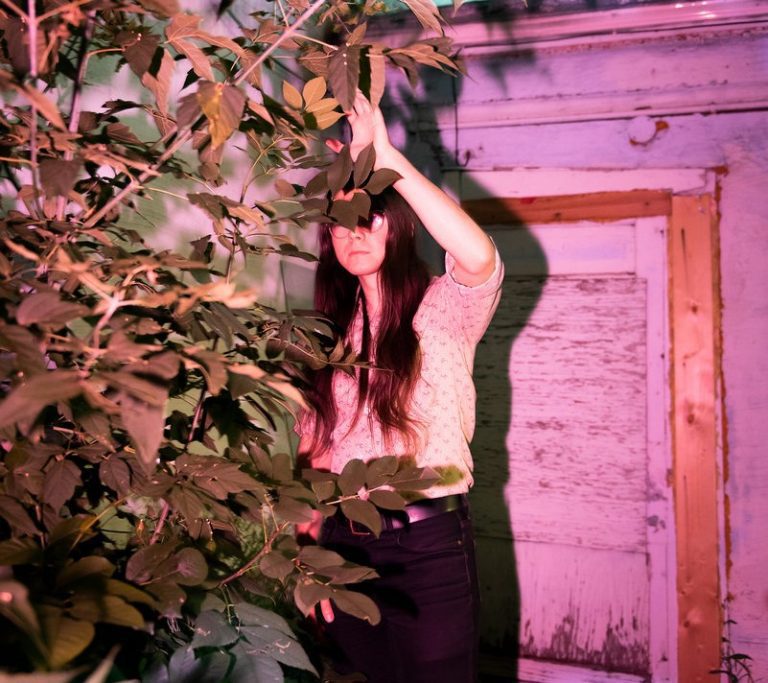 “Asterisms” refers to the random figures that constitute a group of neighbouring stars in the celestial sphere. An asterism has no precise shape, nor any real use. The simple fact of existing and shining in the sky is enough to justify this designation. Canadian indigenous artist  Matthew Cardinal’s first solo project evokes this perfectly.

You may have heard of Cardinal in the Edmonton-based indie-rock trio Nêhiyawak. A debut album, Nipiy, caught the attention of music fans in 2020, when the band was nominated for a Juno award in the Indigenous Music Album of the Year category. When the group disbanded, Cardinal decided to continue his career… in a completely different light: electronic music.

Cardinal remains very humble when talking about his music, emphasizing that this album was created without any real preconceptions. Like a diary, each piece reveals a small part of himself, without really revealing anything intimate. Enigmatic, full of secrets, Asterisms proves to be an immersive and enveloping listen on all levels. By closing our eyes, we can glimpse the lights, shapes and sounds of the space. While Cardinal didn’t really follow a plan, or get inspired by anything specific, the rendering is clear, interesting, and most importantly, authentic. The artist can pride himself on exploring a unique sound and thus offering a work with a very intimate finish.

This Friday, August 27, Matthew Cardinal takes the stage at MUTEK. And he won’t be alone; visual and media artist Stephanie Kuse will present her projections during the concert, adding colour, texture and form to the music. The concert will take place at the 5th floor of Place-des-Arts in Montreal, 9:30 pm. In the meantime, PAN M 360 met with Matthew Cardinal to discuss the project.

Matthew Cardinal: I wanted to make an album for quite a long time, but I was pretty busy with many other projects. So, most of the songs on the album were created… maybe two or three years prior to now? But yeah, the first track on the album, I created seven years ago…  She’s much older than the rest of them. And I just thought… it should go on there!

PAN M 360: Asterisms came out in October 2020, so just a few months prior to the arrival of the pandemic. Was is difficult to create and to produce during that weird period of time?

Matthew Cardinal: It was strange, of course. When the album came out, I couldn’t really tour it or play shows for it, so I ended up doing some streams here and there, but you know, it’s not quite the same. I was lucky to be hired for various commissions and other things. But playing live was just impossible at the time. And it was kind of funny, I wanted the album to come out in February of 2020 and then everything happened… I think the label asked if I still wanted to release it and I was like, may as well, you know?

PAN M 360: You originally were a member of the indie-rock band named Nêhiyawak. Now, you create electronic music for yourself first. What are the pros and cons of working alone?

Matthew Cardinal: I’ve been playing solo for quite a long time, but there’s pros and cons for sure. I mean, playing alone can be… you don’t have to schedule band practices, you don’t have to ask others about decisions, so it’s easier in some ways. If anything goes wrong, it all falls on me! But I miss playing in the band, for sure. It’s fun to interact with your bandmates and you don’t feel lonely, so…

PAN M 360: What response, what emotion do you want to get from the people who listen to Asterisms?

Matthew Cardinal: I would just love if people were to listen to it and feel… whatever they wanna feel. I think it’s up to the listeners. I want them to… take what they can from it. My album is really music made without any intention in some ways. They are pieces that felt good and… I just recorded them. Yeah, so… I just don’t want to tell people how to feel.

PAN M 360: So there’s no storytelling intention in this project? No story to follow?

Matthew Cardinal: Not quite, yeah. It’s a bit of a non-linear audio journal, if you will. They all are pieces that I made at various points of my life, so Asterisms is a record… of my life, in some ways? It’s a journal of sounds.

PAN M 360:  You were nominated for the 2020 Juno Awards for Indigenous album of the year, and for the 2020 Polaris Music Prize long list. What did those nominations mean for you? Do you feel included in the electronic music scene?

Matthew Cardinal: For one, it’s always nice to be nominated for awards. A lot of my friends were also nominated for the Polaris, so that was nice. And as for my inclusion… in some ways, yes? I feel like… (sigh)… I feel like I’m included in a couple different circles. I’m playing these experimental music festivals during summer, like I’m playing MUTEK and I did an ambient music festival in Victoria, in Winnipeg as well… So that’s cool, but I don’t know if I’m really in the electronic world, in a sense? But I’ve played shows for indie-rock fans, people that are into new music, like experimental stuff but it’s an interesting mix, to say the least.

PAN M 360 : Are you satisfied with your media coverage ?

Matthew Cardinal:  I talk to journalists every so often. I mean, it’s not a lot, but I’ll never complain about it. I’ll take what I can, for sure, but I’m not mad or anything that I don’t have interviews every single day.

PAN M 360: For the people like me who don’t quite know the vocabulary or the instruments needed in the process of creating electronic music, can you guide us a little bit in what you used for the production of Asterisms?

PAN M 360: You’ll be performing live at the MUTEK festival in Montreal. While you’ll be performing Asterisms, Stephanie Kuse, a visual artist, will be presenting her projections to illustrate your music. How did you meet her, and what pushed you to collaborate with her?

Matthew Cardinal: Well, I met her through her partner, since I’m good friends with them. And she was already doing projections for other people, and I really liked what she was doing. And I wanted to do a show with projection, with visual art, for a while now. I think that kind of art can add to a performance. I like how it can be more… immersive, in a way. She was inspired by my own photography and she added her own flavour to it. Audio and visual together – it just makes sense.