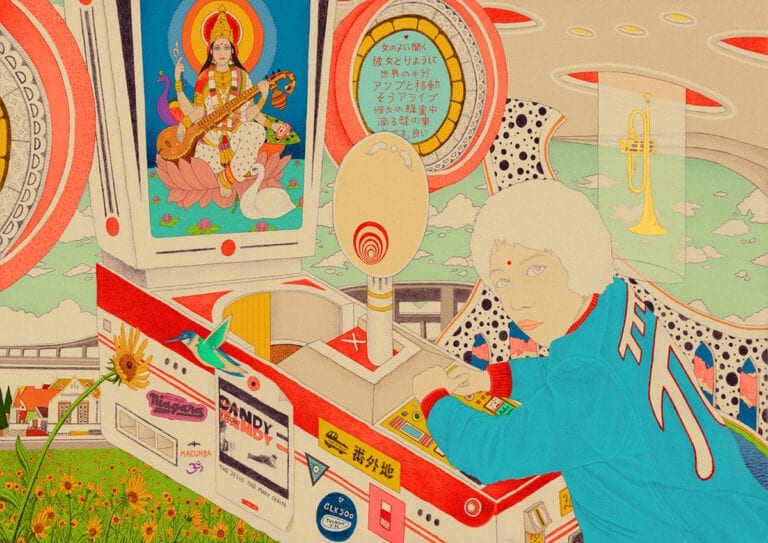 Lots of wonderful things go into the neo-psych art of Indonesia’s Ardneks, but music is the main ingredient.

Above: “Celestial Broadcast”, from the Marquees Tropica series by Ardneks

If you’re a fan of the worldwide, polycultural psych revival of recent years, chances are the artwork of Jakarta-based illustrator, painter, and designer Kendra Ahimsa, known as Ardneks, has tickled your retinas more than once. His visions have graced record sleeves and gig posters for the likes of Moon Duo, Khruangbin, Flamingods, Acid Mothers Temple, and Neon Indian. A visit to his Paraiso Grafica website is a headfirst dive into these and many other wonderful images. Ardnek’s work for the brand-new Ko Shin Moon EP Miniature 1 is among PAN M 360’s Top 20 Record Covers of 2020, which seemed as good an excuse as any to connect with the artist and find out more about what motivates him, the art he loves, and the amazing creative scene evolving across Asia.

PAN M 360: This year, you did the cover art for Ko Shin Moon’s new EP Miniature 1, and for the singles “Nuevo Mundo” by los Hermanos Gutiérrez, and “Mushroom Kingdom” / “Bonsoy” by Australia’s Sunfruits (and there was an animated video for “Bonsoy”). What other music-related commissions have you done this year?

Ardneks: I’m currently working on a couple of music-related projects. I’m not sure I can reveal them yet, since all of them are for upcoming releases. I have to sync with the bands’ announcement timelines, but soon! All I can say is that I’m grateful I still have projects to work on. Because of the pandemic, there are no gigs or tours, which means no posters. I really miss working on gig posters.

PAN M 360: Aside from a general affinity for gentle psychedelia – good trip, not bad trip! – what do you think connects you with the musicians with whom you work?

Ardneks: The music, first and foremost. I only take on music-related projects if I actually like the music. That’s why I always ask if I could listen to the songs first. Besides that, probably the nerding out. Like with Ko Shin Moon, we shared our mutual love for Haruomi Hosono. They told me about Indonesian records they listen to and stuff. I really enjoy the getting-to-know-the-band phase, they tell me stories and concepts behind the songs, the creation process, their influences. It’s easy to tell if a person genuinely loves music after a few conversations.

PAN M 360: I’m really taken with your Marquees Tropica series. These weren’t commercial commissions, they were expressions of self. Each is related to a particular song, which you listened to exclusively until the piece was completed. Is there more about this series you’d like to add?

Ardneks: Music is heavily substantial to my body of work. It’s like, if you look at the back of a juicebox and see the ingredients, probably 75% of every illustration I make is inspired by music in some way. The Marquees Tropica series tries to express it in more of an intimate way, how music has influenced me at different stages in my life. I had this idea of choosing one song from each stage, put it on repeat and start drawing wherever the song takes me, until the illustration’s finished. Listening to the same song over and over took me to fun, weird places.

“Celestial Broadcast” (see top of page) was the first work that I made for the series and the song was The Jesus and Mary Chain’s “Just Like Honey”. It’s about a curiosity-filled stage in my life. It depicts a boy who thinks that the first few lines of “Just Like Honey” is about his dream encounter with the goddess Sarasvati, so he built this machine trying to reach her. I was a rather curious teenager. From trying every hallucinogen, trying to understand different religions and spiritualism, I even went through a hippie phase, gone to rainbow gatherings, ashrams and stuff, until I realized all that utopian stuff are just like an illusory honey and I think I’ve had just about enough. So that’s the narrative behind the piece.

It’s a very personal project. I’m thinking of continuing to add more to the series as the years go by.

PAN M 360: I was thrilled to see that you’ve been developing merchandise, and not just prints, but also apparel and accessories. I was a little heartbroken too – the items that would be available internationally are all sold out! Can you tell me a bit more about this aspect of the expanding Ardneks empire?

Ardneks: I’m sorry! They’re actually not sold out. I had to close shop temporarily due to the current situation. The only shipping method available is quite expensive from where I am, plus it’s a bit of a gamble because different countries have different postal policies. Some sent packages were returned to me for unknown reasons, so I figure I’ll just wait until things calm down a bit until I open the shop again.

Does that make me an emperor? Ha ha! The only empire I believe in is the Wobbling Empire (Yura Yura Teikoku). I don’t really think of it as an expansion, to me it’s just another medium for my work. I was approached by this local brand, Artist Attire, to develop some wearable stuff, and I answered the call. The idea is to make a walking artwork that people can appreciate in unlikely places. A one-hour bus ride will be much enjoyable when you have artwork on someone’s back to look at. The brand itself is planning on working with other local artists in the near future. So I’m actually just one collaborator. It’s surreal though, this one time in Japan I was on the train and I saw some random girl wearing one of my shirts. So that idea came to a full circle!

PAN M 360: Though I see elements of art deco, classic Japanese theatre posters, and French sci-fi comics in your work, the main ingredient, it seems to me, is the psychedelic Pop Art of about 50 years ago – that clean-line, geometrically precise “good trip” stuff, from Yellow Submarine to the famous Fillmore posters. What are a couple of your key influences or inspirations?

Ardneks: Thanks for noticing! Whew, I don’t know where to start, I drew inspirations from a lot of stuff. Music, of course, can’t live without it. I’ll try to listen to almost anything. I grew up with a lot of Japanese anime and manga, I guess that’s where my drawing style’s rooted at. As I got older, I was obsessed with Fillmore-era posters and the psychedelic artistic sensibilities. The colours and the compositional freedom got me. There’s no rule, no grid, you really have to take your time to decipher it. Things really escalated for me when I saw Yokoo Tadanori’s posters. That’s even crazier. How he composed everything is so revolutionary to me. Every element is chaotic, yet beautifully placed in ways you haven’t seen before. It’s the perfect approach for me because I’m a maximalist who likes a lot of details. I drew inspiration from films too. I try to watch at least a film a day, it fuels my imagination. Retro magazine advertisements are also good for inspiration, they just don’t make them like that anymore.

PAN M 360:  Who among your contemporaries, making “rock art” in this neo-psych style, are you particularly fond of?

Ardneks: So many! Some of my favorites are Will Sweeney, Aaron Lowell Denton, Jason Galea, Brian Blomerth, Jaime Zuverza, and Edward Carvalho-Monaghan.

PAN M 360: I’m having a lot of fun keeping tabs on all the cool culture coming out of Indonesia in recent years, in cinema, music, and graphic art. Being there inside that scene, what’s your assessment on the popular arts world of Jakarta and elsewhere in Indonesia these days?

Ardneks: Really? That’s cool! Yeah, I feel Indonesia is in a really good place right now. There are many local platforms giving great opportunities to creators, be it directors, artists, or musicians. Given those platforms, these creative individuals create amazing stuff, and the reach broadens significantly. And thanks to the internet, we can easily find creators from different parts of the country. I think part of it is because both the industry and the audience have better appreciation towards it. What was niche has entered the mainstream. Even the big corporations have dipped into the pool. They collaborate with proper creators and compete in making better projects.

PAN M 360: Your work involves a lot of dialogue with other parts of Asia, both in its content and its audience. What would you say are the cultural hotspots elsewhere in Asia right now, the cities or even neighbourhoods that are exciting and important to you?

Ardneks: I’m particularly fond of Osaka. It’s my second home. I love the city so much. I had the chance to get to know and become good friends with some amazing people there. Great art scene, lots of cool spots to check out, and not to mention the food. Last year, I held an exhibition at this neighborhood Nakazakicho. It’s really an interesting area – located next to the contrasting modern district Umeda, the neighborhood is comprised of old Showa-era buildings, buildings that were unharmed during the wars, but young people have transformed it into art galleries, coffee shops, vintage secondhand clothing stores, record stores, ramen joints. Shinsekai, Dotonbori, Nakanoshima, Shinsaibashi, many unique interesting neighborhoods. There’s this the annual event called Unknown Asia, it’s where almost 200 artists from all over Asia gather and exhibit their work personally. So many great artists, and you can chat with them about their work. I participated in 2016 and it not only jumpstarted my career, it opened my eyes about the art scenes in other parts of Asia.

PAN M 360: Finishing out 2020, there’s a lot of reflection right now on the best music of the year. What have you been listening to lately? Do you have a particular favourite record of 2020?

Ardneks: I’ve been listening to a lot of exotica music lately. Les Baxter, Martin Denny, Xavier Cugat, Piero Piccioni, and more. I haven’t really followed this year’s releases so I’m not sure about the best music of the year, but the ones I listened to and like are Kahil El’Zabar’s America the Beautiful, Khruangbin’s Mordechai, Jon McKiel’s Bobby Joe Hope, I really enjoy Fontaines D.C.’s A Hero’s Death. Oh, and Shintaro Sakamoto released four new songs earlier this month, so good.