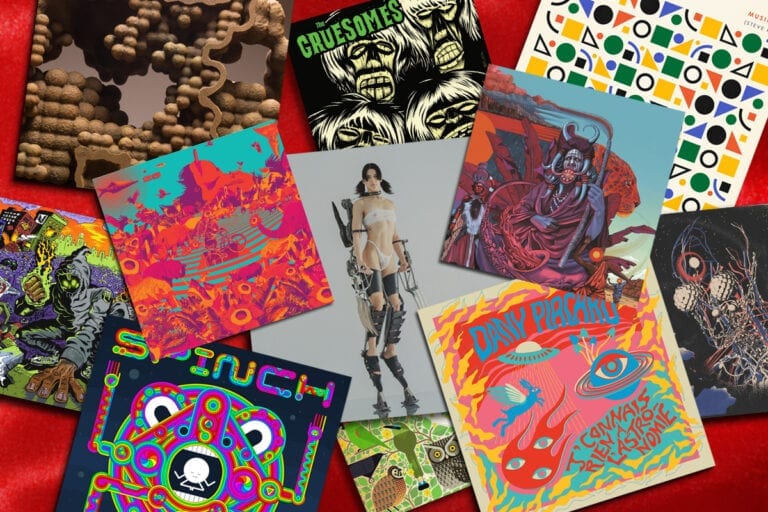 For the essential visual flair they add, PAN M360 salutes the best cover art of the year

The art of the excellent record sleeve is definitely not dead in the digital age, particularly given the resurgence of vinyl. Photography, collage, computer magic, and good old hand-drawn delights add essential visual flair to our 20 picks for the most remarkable record covers of 2020.

French duo Ko Shin Moon’s first of four EPs in its Miniatures series recently saw the light of day, affording four journeys to the East on magic carpets woven of featherweight space disco and grooving electro-folk. There’s an Arabic tilt to this EP, perhaps later iterations will alight in Turkey, India, or even Indonesia. On that note, the gracefully strange cover art, expanded on in the luscious video for the first single “Antelias”, is by Jakarta’s celebrated Ardneks – read our profile of the artist here. – Rupert Bottenberg

The Montreal band’s decision to ask the Belgian artist Elzo Durt to illustrate their album was a wise one. As soon as the first single was released, our curiosity was piqued, and the rest was up to the task. We recognize Durt’s style and technique, but the subject matter is different from his familiar work and gives this release a special aura. And what can we say about its variations! A cover that drives one to discover Elzo Durt as much as Double Date with Death. – Patrice Caron

Abetted by the likes of The Heliocentrics and the ubiquitous Miguel Atwood-Ferguson, L.A.’s Gaslamp Killer – heir apparent to DJ Shadow – delivered this year a third album of lethally potent, instrumentally inclined downtempo. The esoteric artwork by TANT, one quarter of the amazing Israeli street-art crew Broken Fingaz, complements the record’s creepy, curious vibe with its sorcerous symbolism. – Rupert Bottenberg

The cover of KiCk i by Arca, alias Alejandra Ghersi, is a striking queer-futurist extrapolation of humanity on the road to transhumanism. Not only does the electronic artist illustrate her own transformation from masculine to feminine, but she also artistically evokes the changes to come by donning stylized prostheses, with stainless-steel claws and stilts. We probably won’t look like this in the next century, but… it’s a good bet that we won’t be exclusively made of organic matter anymore. – Alain Brunet

The images created by artist Chris M. Wilson are inspired as much by the world of comic books as they are by hip-hop and hardcore punk aesthetics. For the cover of Denzel Curry and Kenny Beats’ UNLOCKED EP, he has imagined a post-apocalyptic world that’s a perfect match to the explosive music concocted by the duo. In a city disfigured by a detonation, the cyborg DJ works out a plan on his laptop, while the mutant MC brandishes a fistful of fluorescent energy, ready to deliver radioactive punches to anyone who blocks his way. – Steve Naud

When we sleep, meditate, or listen to the hypnotizing latest album from the band Inventions, we produce different types of brain waves invisible to the naked eye. The cover illustrates this with a drawing from the book The Principles of Light and Colors, an occult treasure of pseudo-science written by Edwin D. Babbitt, one that’s fallen into oblivion since its release in 1878. – Louise Jaunet

Thesis Sahib’s superior batch of chiptune jams and playful but substantial electronic dream-pop made a fine accompaniment to the independent, made-in-Canada video game Spinch. The game brings to life an “ecosystem” envisioned by Hamilton, ON graphic artist and award-winning comic creator Jesse Jacobs, and the soundtrack’s totemic cover is a perfect example of his renowned style, suggestive of fluorescent spaghetti in outer space. – Rupert Bottenberg

At a quick glance, the cover of San Francisco saxophonist Idris Ackamoor’s outstanding free-jazz excursion might be mistaken for the work of the late, great Mati Klarwein, whose exquisite wonders adorned classic LPs by Miles Davis, Santana, The Last Poets, and more. No, it’s in fact the work of Japanese painter and muralist Tokio Aoyama, whose visionary canvases vibrate with a love for Black American music and ideas (remember Georgia Anne Muldrow’s gorgeous Umsindo?). – Rupert Bottenberg

True to his habit of surrounding himself with talent, the seasoned Drew McDowall here has called upon American multimedia artist Caroline Schub, whose work is featured on the cover. Fascinating on its own, it brilliantly depicts the dichotomy between elevation and depth that runs through the album. – Geneviève Gendreau

The second such fundraiser compilation overseen by Shika Shika’s Robin Perkins, aka El Búho (the first, in 2015, was for rare birds at risk in South America), is an all-around great album. It has a cohesive principle, excellent tunes, a worthy purpose, and to tie it all together, the bold and beautiful artwork by designer Scott Partridge. Check it out in the sweet video for The Garifuna Collective’s “Black Catbird”, the best track of the bunch. – Rupert Bottenberg

Sarah Marcotte-Boislard has several album covers in her portfolio, and this is her second collaboration with Dany Placard (she also designed the cover of 2012’s Démon Vert). She knew how to perfectly illustrate the psychedelic inclinations of Placard’s proposal, with an almost hypnotic use of colour. She totally nails it. – Patrice Caron

Like the Berlin-based Peruvian production duo’s music, the fascinating cover image for Fiebre suggests something at once abstract and algorithmic, and also implacably organic. It’s in fact a detail from a sculpture in Australian artist Nicholas Magnan’s Termite Economies series, which draws though-provoking connections between ecology, technology, and human society. – Rupert Bottenberg

For their third album, the excellent New York synth-punk duo The Vacant Lots once again called upon the artist Ivan Liechti, who creates minimalist op art covers with maximum visual distortion. Be careful not to stare at it for too long, you might fall into a hallucinogenic zone with no possible return… – Louise Jaunet

By way of an unlikely but effective, beat-heavy dark-ambient approach, Jonquera, a producer out of Lyon, France, evokes an iconoclastic medieval morality tale across his new album DARKOS LP. It’s summarized by the pseudo-woodcut cover image by Toulouse-based artist Alison Flora, an investigator of esoteric enigmas, ancient mysteries, and ruptured taboos… who painted the piece in her own blood. How gloriously dark is that? – Rupert Bottenberg

The Gruesomes – Someone Told a Lie / Make Up Your Mind (KOTJ)

Montreal’s “tyrants of teen trash”, The Gruesomes, have reigned over the global garage-rock scene since the ’80s. Thankfully, they’ve shown no significant signs of maturing over the decades, and celebrated 35 years with a 45 single. The best part is, it came with a bonus comic book, relating in Spanish two spooky tales for the band to get tangled up in. It’s all in impeccable retro chiller style, of course, care of Spanish artists Furillo and Jorge Rueda, the pair behind the print shop Palmeras Y Puros. – Rupert Bottenberg

“I have no use for God. God has no use for me. When there’s nothing to lose, then you’re finally free.” One album after another, singer Michael Berdan always seems to be in search of a salutary revelation, or even a Christic redemption, illustrated on this single’s sleeve by a montage made from a morbid and poetic photo dating from the Victorian era. – Louise Jaunet

A great source of Indonesian sounds, both new and old, Jakarta label La Munai assembled this intriguing and diverse selection of current psychedelic pop, rock, and beyond from southeast Asian archipelago. Designer Satria Nurzaman activates an intense colour scheme and a dash of op art for his wild digital collage of flora, fauna, and freaky stuff, a perfect accompaniment to the record’s imaginative music. – Rupert Bottenberg

Through a collage of 25 different artworks, Lionel Williams takes us into his transcendental, celestial, and heavenly visual universe, which comes to life in an immersive digital installation available on his official website. The artist invites us to explore different landscapes and to follow a mysterious spiral symbol that makes us travel from one 3D virtual painting to another. – Louise Jaunet