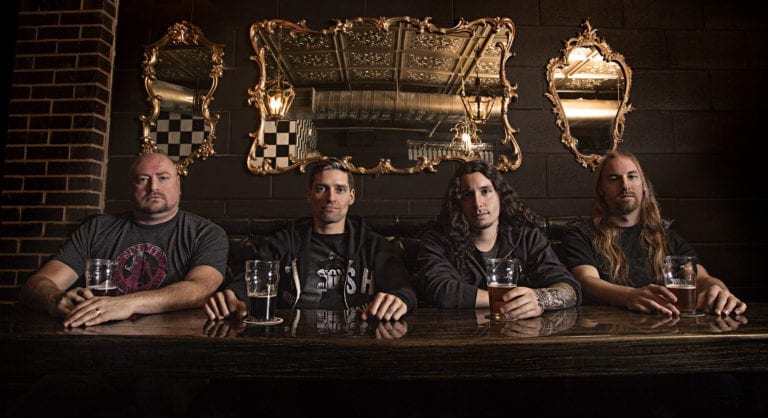 Akurion: A Labour of Love

Akurion first appeared in 2015 on a promotional CD featuring the song “Yet Ye See Them Not”. The years went by with no indication as to whether the band would ever see the light of day again. We now know that between the formation of Akurion in 2012 and the release of “Come Forth to Me” on April 10, 2020, the founding members, guitarist Rob Milley (Neuraxis, Necrotic Mutation) and singer Mike DiSalvo (Come Cluster Void, ex-Cryptopsy), went through a period of mourning. It must also be said that the other musicians of this supergroup, bassist Oli Pinard (Cryptopsy, Cattle Decapitation, Vengeful) and drummer Tommy McKinnon (Conflux), haven’t been twiddling their thumbs.

PAN M 360: The album was written and recorded before the passing of important people in your life. Mike, it was your wife, and Rob, it was your dad. How does it feel to promote it?

Mike Di Salvo: What’s past is past. You know, personally speaking, I live in every day. It’s in the past, so when I listen to that record, it’s a record that speaks to me of perseverance and strength. We were one unit that put this album out together, even through all that craziness that was happening. It’s an album that I can listen to and feel quite good about, actually.

Rob Milley: I can never be in Mike’s shoes and he’s not in my shoes, but, basically, the album is like a moment in time for all of our lives, and unfortunately, some sad events happened. Now that the album is out – and I only speak for myself – but it’s kind of putting a finality to whatever I was feeling through the making of it. I definitely feel good, now that the album is out. That, in a way, I can move on?

PAN M 360: If we say that an album captures a moment in time, do you feel that Come Forth to Me is still prevailing because you began working on it in 2012 and we are now 2020?

MD: The album is still fresh to me, even though we started this up in 2012. I think it’s sort of a testament of my belief in the record and the songs. When I listen to it, there’s not a moment where I want to fast-forward through it. The record was built through a bonding, you know. We wrote this album collectively, even though Rob and I had some ideas before we brought the other two in [bassist Oli Pinard and drummer Tommy McKinnon], but ultimately, this is a real testament of four people putting together an album that in the end I still feel is very, very fresh.

PAN M 360: Did you have a goal when you started working together?

RM: It was basically just me and Mike. We just wanted to get together for the pure goal of creating music. Just the creativity, not to make a name for ourselves or anything like that. It was just to create music together because we’ve been friends for a long time and were also jamming prior to that. It was just pure creativity, right, Mike?

MD: Yeah, it was for the love of music. Rob would come in with songs pretty much already seasoned out. And then, I had some words. We crafted the two together and then it just spun out to where we are now.

PAN M 360: Did you want to explore a specific style of music together, or just go with the flow?

MD: Everything that you hear on the record was by design. We didn’t want something that was gonna be cookie-cutter, everything just sort of 1-2-3-4. We did want something that was gonna be technically sound, but also progressive in ways that could expand the sound and head in different directions. These songs were written for us. So that’s the starting point. We wanted to expand on the sound and bring people into another territory that perhaps they wouldn’t be expecting. I think that we achieved what we were looking for.

RM: We spent about four to five years, taking our time, like Mike was saying. We were doing it for ourselves. There was no deadline, where we had to have something finished and then maybe have regrets after. We took as much time as we thought we needed and that’s why we’re saying that we are very, very satisfied.

PAN M 360: You could have worked another five years.

RM: We could have, but I mean, we also realized that we felt like it was nearing the completion. We can tell these songs are now complete. You asked about our goals, and one of our main goals was to record this album with all the musicians together in one room. Kind of old-school, like they used to. So that when we listen to the album, we can actually feel the human energy. I don’t want to sound mystical but you can feel it’s humans playing this. Not like nowadays, everybody recording everything on a computer where everything is separated and it’s very robotic.

PAN M 360: My favourite song on the album is “Souvenir Gardens”. This is your cinematic song.

MD: I think that’s largely thanks to Luc Lemay’s talent and generosity. We had been speaking with Luc, because we are obviously big fans of his. He was also very motivated and interested in doing something for us. When we heard the results of what he sent us, we were blown away! Basically, we were not expecting what we heard, in a good way. It is very cinematic in a way, and it complements perfectly the rest of the songs, once it gets into the heaviness. It’s a perfect combination to have that.

PAN M 360: The first songs on the album reflect what I was expecting from Akurion. Then come “Souvenir Gardens”, that show us that Akurion is more than that.

MD: We did want that, for sure. We did want people to have a journey with this album. We wanted to have an experience that was going to hopefully bring something new to the table. Then again, when we were putting this album together we weren’t thinking about what people were gonna think. It was really if we’re listening to this, we want to have this soundscape, this projecting kind of album that brings you in different directions at every turn. Then, of course, once everything is realized, then you can start to sort of say, well, hopefully people fall on the same sort of path that we’ve been on.