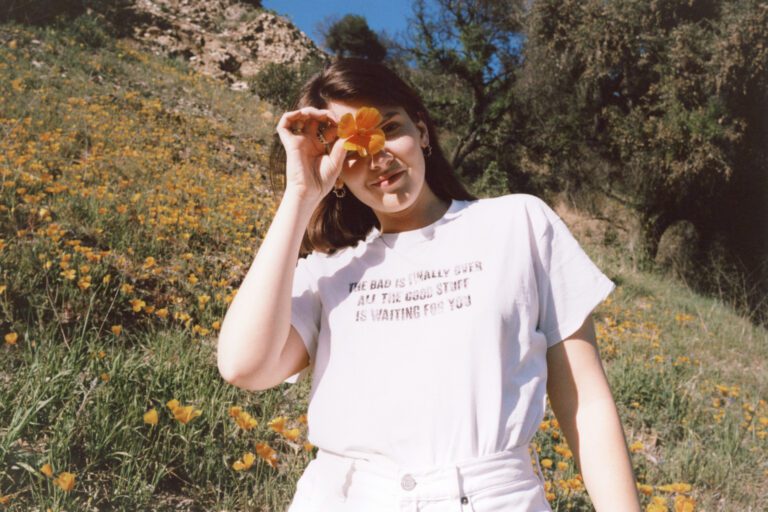 Ideas of Space, Tess Roby’s 2nd album that came out last April, can raise questions about the singularity of art. Where does this singularity come from? How can it be explained? Undoubtedly by the course of the artist. By her/his influences, conscious or not, to a certain point. Probably by her/his training and her/his musical mentors. One of the distinctive aspects of Tess’s music and lyrics is what they evoke: soft and fuzzy worlds, old and new, daydreams and daytime floating where no fears or regrets lurk. Pan M 360 was able to ask Tess Roby a few questions about the creation of Ideas of Space, the SSURROUNDSS label she created, what sets this new album apart from Beacon, released in 2018, as well as a circle of stones located in Stanstead, in the Eastern Townships.

Pan M 360: Hello Tess! Well, you really foiled the sophomore slump with Ideas of Space. Beacon was impressive, and Ideas feels stronger, even if only because it offers two more songs! Are you equally or more satisfied with this new album?

Tess Roby: Beacon was written and recorded in 2016. So by the time it came out in 2018, I felt like it wasn’t necessarily as representative of myself as a musician as I would have liked. I still really loved the songs and believed in them. As for the new album, the most recent song was finished last year, in the spring. So it feels more representative of myself, as a producer and a musician. It was four years between the release of the two albums, and even more, if you think about when Beacon was written and recorded. So, I feel confident about Ideas of Space.

Pan M 360: Did you have your own label then, SSURROUNDSS, or is it a new thing?

Tess Roby: It is a new thing, Ideas of Space is the first album ever released by SSURROUNDSS.

Pan M 360: Now about your voice. It is pure, and it is both very real and ethereal. It seems to come from times immemorial. What particular training did you have, and how do you train your voice still?

Tess Roby: Oh, I sang with the Canadian Children’s Opera Company, from when I was eight to 16 years old. We worked on operas and we did a lot of choral and classical music, which really gave me this introduction to voice and harmonies. And it also gave me this discipline of practicing and rehearsing. So it was a very interesting thing for me to do as a young person. And we would tour in Europe and I sang in the big opera halls in Toronto, with the Canadian Opera Company. I guess I got a lot of inspiration from that. And now I don’t sing with a choir or anything. I really just sing for myself and write songs.

Pan M 360: And I guess the listener can feel all that training behind your voice. And musically, you manage to create electronic sounds that feel mostly futuristic, both also vintage somehow, on some songs. How do you balance the usage of vintage synths and state-of-the-art technology?

Tess Roby: I’m still growing as a producer. I work with new and vintage synths. I’ve written a lot of my songs around my Roland Juno 106 for Beacon. For this new record, I added new ones, like the Waldorf Blofeld synthesizer. But I write and produce in this very intuitive way. Personally, I’m not taking influence from specific artists or specific songs. I listen to a lot of music. And I do listen to some new music, but I’m really not trying to chase anyone else’s sound. I use synthesizers in a way that is very unique, to carve a sound shaped or influenced by more vintage style stuff, but also just create my own art as I go.

Pan M 360: That’s true because usually, it’s kind of easy to pinpoint influences. But in your case, it’s quite hard, if not impossible. I mean, some sequences do remind me of stuff that I’ve listened to, but again it’s really hard to pinpoint anything.

Tess Roby: For me it’s the biggest compliment because my music comes from a very honest and intuitive place. We have this tendency to–and it’s not wrong–compare artists to each other. I’m making music, making art because I have to. It’s really like not to be chasing anyone else’s sound or anything. So I hope to keep going like this.

Pan M 360: These are hard times maybe not for everyone, but for a lot of people around us. Thus your new album comes out at the right time, because it possesses soothing properties. I’d be curious to hear what a musico-neurologist would say about it. I hope the word will get around! You’ve had quite a bunch of collaborators on Ideas of Space. Austin Tufts, from the Calgary band Braids, worked on the percussion side. Joseph Shabason took care of the woodwinds and some percussions. Ouri, who is a cellist but also a producer and many other things, plays the cello in one song. And there is guitar by an Eliot Roby on “Eyes Like Babylon.” Can you tell us more about these fellow musicians?

Tess Roby: Before this record, I had never collaborated with other artists on my own music. I was introduced to Austin–who was really my main collaborator on this record–by Sebastian Cowan from Arbutus Records. The first time we met, we were actually in his studio, listening to my songs with the intention of working on some drums together. And this was before the pandemic happened. So the first time Austin and I got in the studio together was February 2020. We did maybe three days of back-to-back recording for the drums. We planned our next studio dates, but then COVID hit. Then there was just this really big break from the record, completely. I really stopped making music. I stopped thinking about the record, everything was on hold for almost an entire year.

Because of this, Austin took on this bigger role. We found ways to go into the studio together, in January 2021. And then he started engineering more of the recording. We started doing more electronic drum work. Austin eventually said, “Who is going to mix this record?” I said I didn’t know and he said “Okay, let me let me mix a song for you, and tell me what you think.” He sent me the first mix of Ideas of space. This had me in tears, it reached this completely new level. So I invited him into my whole sonic world, which is not an easy thing for me to do.

As forJoseph Shabason, we were featured on a compilation together in 2020 And I love his music so I reached out and asked him if he wanted to collaborate. So we ended up working together. On the songs that he’s featured on, I think that he brought so much life. I’ve never worked with these acoustic elements before, like Ouri’s cello. It was really cool to produce these songs in a way that I hadn’t before. As for Ouri, we knew each other. I’m in awe of her, she’s a very, very inspiring person to me.

Pan M 360: Will they be there with you on stage, for your June 2nd concert at Phi Centre?

Tess Roby: Unfortunately not. I was trying really hard to get some people in. We’re back to touring schedules, everyone’s out in the world again. But I do have my brother, who’s flying in to play. It’s gonna be an amazing show and the band shows a lot of like power onstage.

Pan M 360: I’m looking forward to it. Just one last thing: I noticed the video for the title song was shot in Stanstead. My family had a cottage in Fitch Bay, a hamlet that has been incorporated into Stanstead. I haven’t been there in a long time, I didn’t know there was a Stonehenge-like structure in Stanstead!

Tess Roby: The whole video was shot in the Eastern Townships over three days, with a very small team of close-knit friends. I found all of the locations of the Ideas of Space video on my phone with Google Maps. So when I found the stones circle, I knew it was perfect. We were in touch with the city of Stanstead and the mayor to make sure we had that shooting location. So I got really lucky!

Pan M 360: Yeah, just about an hour and a half away from Montreal! Thank you so much for this interview, Tess. And congrats again for the album. Really looking forward to the concert!

Tess Roby: I really appreciate your kind words about the record and for the opportunity for the interview. I haven’t gotten much local Montreal press, I’m very happy to have a bit before the other launch at the Phi Centre.