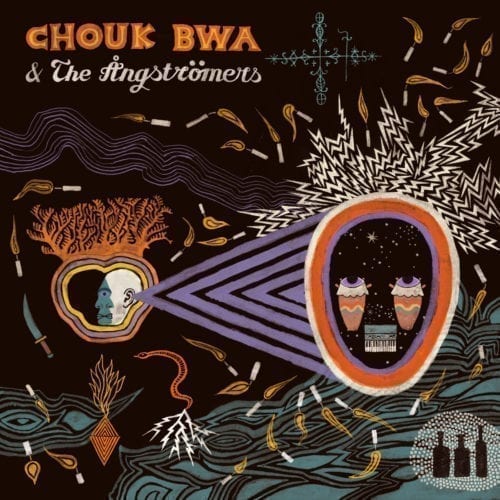 Following in the footsteps of Boukman Eksperyans and company, Chouk Bwa have sought out international ears for mizik rasin, or roots music, Haiti’s own vernacular of African polyrhythms and choral vocals. They do so in no small part to better represent the real face of the vodou faith, and the reality of daily life in Haiti, the ups as surely as the downs.

The sextet is pyramidal in structure, with leader Jean-Claude “Sambaton” Dorvil flanked by support singers Maloune Prévaly and Edèle “Sasufi” Joseph, the three in turn backed by singer-drummers Gomez Henris, Sadrack Merzier, and Jean Rigaud Aimable. The dynamic certainly seems to work for them.

Since 2016, they’ve partnered with The Ångströmers, the Brussels-based pairing of Nicolas Esterle and Frédéric Alstadt, who direct their raw, analog electronics and dub distortions towards enriching and expanding Chouk Bwa’s sound.

The attention-grabbing title track, which opens the album, is as close as the collaborators get to the familiar and tiresome ethno-techno template, though saying so is doing it a disservice. Only on the low-key, funky instrumental “Kay Marasa Dub” do the Belgians really assert themselves. It’s promptly followed by “Peleren” with Dorvil a cappella, supplemented by no more than the sounds of nature and his sonorous fè, the bandleader’s commanding iron bar-gong (he’s then off on a bit of a Fela Kuti kick on the grand “Negriye”, but that’s another story).

The Ångströmers’ gently hallucinatory flourishes are ever present, but never an impediment to Chouk Bwa’s potent expressions. In brief, a study not in contrasts, refreshingly, but in creative cooperation.