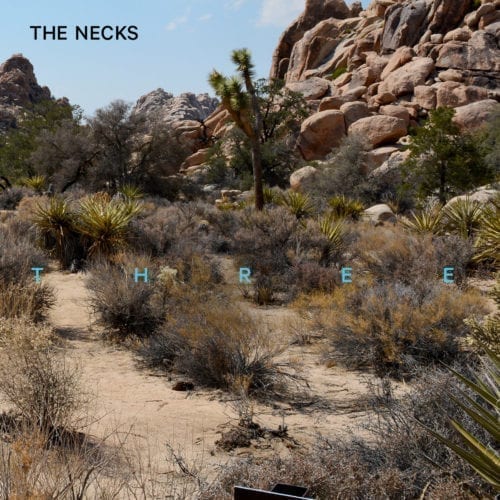 The Necks is an Australian band that celebrates its 33 years of existence this year. Although they use classical instrumentation such as piano, double bass and drums, their music is anything but conventional. Indeed, the trio has become known in concert for its long improvisations – generally lasting about 50 minutes – which slowly evolve according to repetitive motifs and gradually transform themselves organically. Totally in tune with the moment, the musicians follow the music as much as they feed it, and it takes them into sometimes astonishing territories.

The band’s studio recordings are quite different. Although improvisation plays an important role and their duration is generally about the same as that of the live pieces, the studio work allows the tracks to be stacked up and to elaborate a dense and complex multi-leveled ensemble. This is the case with this album, which includes three pieces of about 20 minutes each.

With the first one, no preliminaries, we are immediately immersed in the heat of the action. In the heat of the moment. The material is dense. To its basic palette and hectic percussion, the trio adds organ, synthesizer and electric guitars whose lines criss-cross the space. Around three-quarters of the way through, it intensifies a notch, we reach a plateau, then in the last minutes, a slow decrescendo takes place. All along, the waves are so saturated that, strangely enough, it’s when everything stops that you can best distinguish matters, as if you could then see the music in cross-section, some of its constituent elements, like the fuzz of the guitar.

The second tracks is in a way the antithesis of the first. Here, it is space and silence that are highlighted by cymbals and scattered, well reverberated notes, triangle tinkling and echo effects. One floats in a state of weightlessness in some intersidereal space. Then, in the third, we find ourselves on terra firma, moving softly at the pace of a deliciously swaying groove.

A good vintage from the trio, and an excellent starting point in its own way.