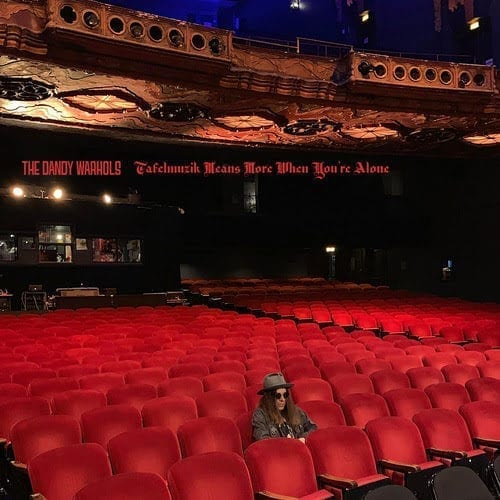 Well, we should warn you right away, Tafelmuzik Means More When You’re Alone is no ordinary Dandy Warhols album (if you can call it an album). It’s actually 10 musical deliriums of varying durations, captured some 10 years ago in the band’s studio/headquarters in Portland… and it lasts almost four hours! To be precise, 214 minutes. On this oddity, Courtney Taylor-Taylor’s band embarks on all sorts of explorations where everyone generally plays an instrument that is not their own. The band just agrees on a key, presses record and off they go. They stop when they’ve had enough. Perhaps the only exception is “Zia Rolls Another”, Tafelmuzik‘s only non-instrumental piece – and its shortest – sung/spoken in French by keyboardist Zia McCabe and the New York Dolls’ Sylvain Sylvain. Produced by Jacob Portrait of the Unknown Mortal Orchestra, Tafelmuzik (“table music”) is rather unsettling for those interested in the group, but the object remains nevertheless in the spirit of the Dandys, that is to say quite bewitching. In short, it’s the perfect background music for a one-on-one dinner with yourself, meditating, relaxing, cuddling, chilling, chatting with your dog, or doing nothing at all. It makes the long days of confinement go by a little faster, and part of the profits from this album, only available in digital version on Bandcamp, will be donated to the Sweet Relief fund to help the musicians.