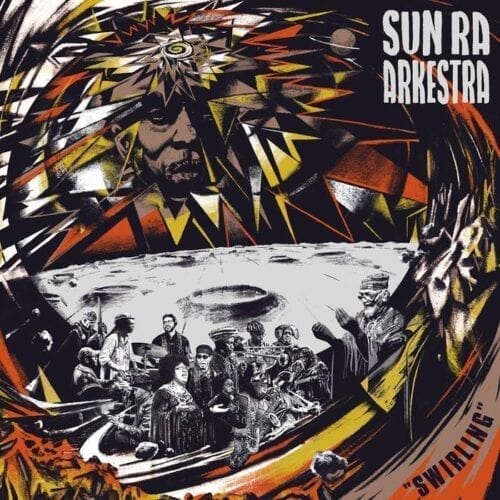 Let’s dare to say it: Herman Poole Blount, alias Sun Ra, is one of the greatest jazz creators of all time, and of the entire known and unknown universe. His spaceship had one antenna planted in the tradition of the swinging big bands of the golden age, and the other directed towards strange nebulae from which came sounds unheard of on our planet. In 1993, it left our orbit and flew to Saturn, where it’s said to have originated. One of his disciples, the saxophonist John Gilmore, took the reins of his Arkestra until he passed away in 1995, to be replaced by his colleague Marshall Allen, also a saxophonist. Now 96 years old – making him one of the oldest jazzmen in our galaxy – Allen presided over the release of Swirling, the first album from the extraterrestrial troupe since 1999.

The sun god’s orchestra has been touring the world’s stages for all these years, and you can hear it! This new recording demonstrates that, under the leadership of Maestro Allen, the divine band has retained all of its striking power. On these 13 tracks – a new composition by the leader and twelve reinterpretations of standards created by his cosmic majesty – the Arkestra makes the sidereal colours dance. The cosmonauts who are used to this music won’t be disoriented, but the new arrangements devised by Allen stir up enough space sauce to avoid retread. The blues roots, the tunes inherited from a fantasized Egypt, managed free-jazz stridencies, and futuristic electronic effects once again happily cohabitate. Let’s hope that the ears that hear this joyful band for the first time will later have the wish to explore the opulent discography of the great Sun Ra. Light years of pleasure await them!