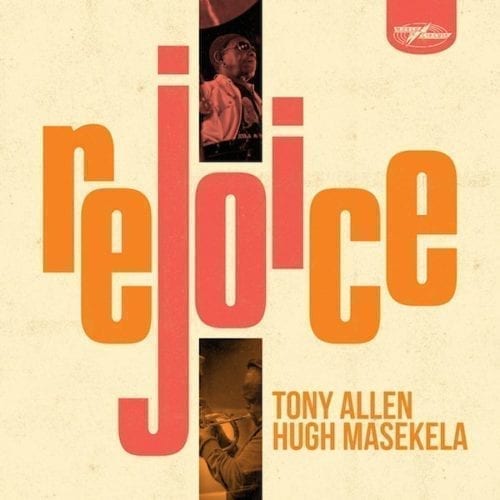 After too long a wait, here are two titans, together at last. Each is or was a pioneer in Africanizing Black American styles – Nigerian drummer Allen restructured funk into Afrobeat alongside Fela Kuti, and South African brass man Masekela was the continent’s first jazz superstar.

Friends and mutual admirers since the mid-’70s, the pair finally hit the studio together in 2010 for an impromptu and unresolved session. Masekela’s passing away in 2018 compelled Allen to dig up the tapes and bring the material to the finish line. Why the two took so long to jam is understandable – busy schedules and all that. But why this stuff was then shelved is a mystery. In any case, the case is closed, because here it is and damn, if it isn’t good!

Rejoice isn’t all that ambitious a production, but it’s a gently exhilarating listen from one end to the other. Hearing Allen play in a jazz context is a delight, a bit stripped down and tougher in his touch, with those percolating polyrhythms that are so distinctively his ever present. Masekela, for his part, is lively and expressive, matching the cheerful restlessness of Allen’s grooves, for the most part on his peppy flugelhorn.

Filling things out are a gang of next-gen jazz talent from that London scene that was just kicking off when Allen and Masekela connected, folks drawn from acts like Ezra Collective, Kokoroko, and sax-punks Acoustic Ladyland. Contrary to character, at least in the case of the latter, the kids do their part with humble restraint, leaving all the room needed for the headliners’ memorable conversation.

It’s a long-distance dialogue between J-burg and Lagos, from the Zulu chants that bookend opener “Robbers, Thugs and Muggers (O’Galajani)” to the pronounced Afrobeat structures of “Slow Bones” and of course the salute to Fela, “Never (Lagos Never Gonna Be the Same)”. The line of exchange isn’t entirely straight, though – are those echoes of Ethiopia in the refrain to “Agbada Bougou”? There’s that and much more to dig into here, because while Rejoice might be a pretty casual, no-frills get-together, there’s never a dull moment during the course of its 40 minutes.